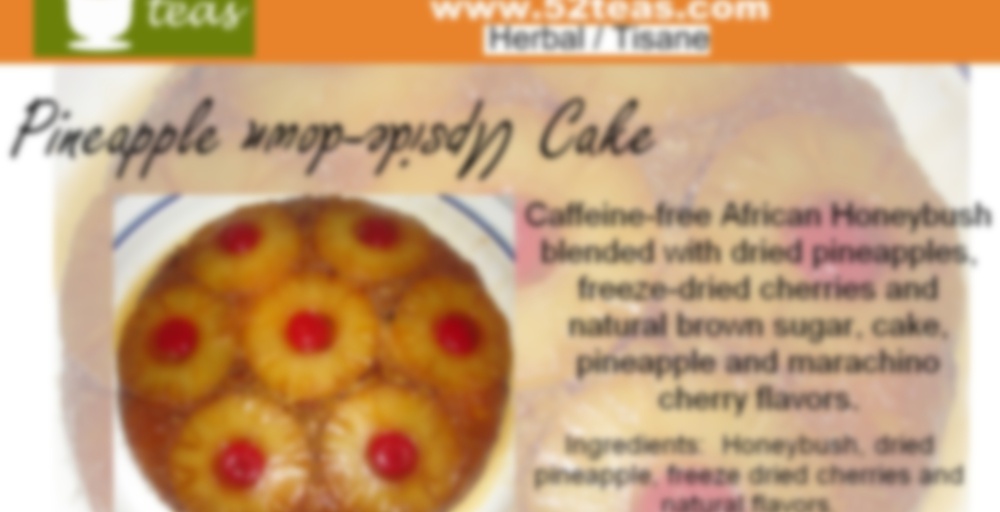 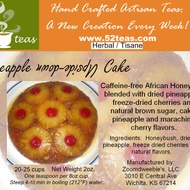 Our caffeine-free African Honeybush (I know this is two Honeybush blends in a row, but I couldn’t resist), blended with dried pineapple and just a touch of freeze dried cherries and natural flavors. We’ve included the natural essences of cake, pineapple, brown sugar and even a hint of maraschino cherry to top it all off.

Tea for All Reasons 76

Okay! I’m happy! I doubled the amount and BOTH the Pineapple AND Cherry flavors came out more – just liked I hoped! This smells awesome and tastes great!

I finally cold brewed this tea and I’m a wee bit disappointed. It flattens out and tastes like a bit of cherry added to a rooibos. I’d guess that hot brewed is the way to go with this blend. I’d give the cold brewed version a 70. It’s still yummy, but no TG for this tea. NE

Cold brewed? I wonder if hot brewing it then letting it cool would work better.

I totally agree with you. I sorta tried to say that in the note, but now I realize how it reads. It’s supposed to be “I guess hot brewed iced tea is the way to go with this blend.” Yes, I’m goober ;)

The smell of this tea is incredible! Sweet and fruity – and the cherries – oh the cherries! (For those of you who don’t know, cherries are my favorite fruit).

I kept the steeping pretty mild this time so the results were a little weaker in terms of the added flavours – I could taste the honeybush fine though. I can still distinctly pick out the cherry and the pineapple, particularly as the tea cools. The fruit flavours mesh quite nicely with the natural sweetness of the honeybush – I think rooibos would ruin a blend like this but honeybush was an excellent choice for a base.

The rating I’m giving this tea right now is subject to change after I fiddle around with the steeping parameters a bit.

Okay, Pineapple Upside-Down Cake is my husband’s favorite cake ever so I primarily bought this with him in mind since he doesn’t drink much caffeine. But, I will definitely consume more than my fair share of this pouch. The brewed tea has such a realistic cake scent that I found myself just staring into my mug – how did 52teas accomplish this? The pineapple/brown sugar combo is the most noticeable but that is my favorite part of this cake so I love it! The buttery, rich cake flavor also plays a large role followed by a touch of cherry which, thankfully, doesn’t taste like medicine. I’m taking this with just a pinch of sugar, but I think it would be divine as a tea latte which I plan on trying out soon.

Once again, another winner! This 52teas order really made my Monday!

I really like this one too. I love the buttery cake taste to it. Ohhh… CAKE BATTER flavored tea. Yes. yes… that is what we need. Cake Batter Matcha.

Heck yes! Cake batter tea of any kind! I would be all over that for sure!!!

OMG! That would be AWESOME!

This is one of my favorite 52teas blends, and possibly one of favorite teas (tisanes) period.

I was really excited to try this week’s blend. I bought it to make it iced, but it’s a bit dreary here today so this was prepared hot. I feel the need to mention how impressed I was with 52tea’s speedy (and free) shipping. I ordered this late Monday evening and got it today (Thursday).

I was also impressed with the huge pineapple chunks that were present through out my bag. It looks like I’m going to have enough chunks to have 1-2 in every cup! This was the sight upon opening up the bag: http://www.flickr.com/photos/47736372@N04/4544378422/

The dry leaves smell a lot like pineapple and cake. Once steeped, I can smell cherries as well. I threw in a bit of sweetener and prepared myself to be delighted.

This one’s a winner, folks! The taste is consistent with the smell: Right away, you get pineapple. You can even taste cake somehow, although I’m not exactly sure how Frank managed that one (way to go, Frank!). It’s a certain smooth, slightly sweet and buttery taste that is hard to describe adequately. The cherries are in the aftertaste and they linger in your mouth for quite some time. In case you were concerned (because I know I was), the cherry taste here is not the medicinal, children’s Tylenol cherry taste I was expecting. It really tastes like true maraschino cherries.

This is very good. It tastes like true pineapple upside-down cake. I half expected to lick my lips and find cake crumbs clinging there. It is delicious hot, but I can’t wait to try it iced!

Yay! I’m always anxious to see the first reviews of our newest blends. I’m so glad you enjoyed it!

I am definitely looking forward to trying this one :)

Crap. You made me order it! I was trying so hard to resist. I cannot resist the honeybush.

Eee I can’t wait to receive mine!

All of you guys won’t be disappointed!

It it more cake than pineapple and cherry…they are mere hints, delicious but not as sweet as I was expecting.

yes, we tend to use custom time a lot

Yeah, I would too if that’s what they consider strong for herbal:) It’s just not quite custom enough for me yet.

Another tea I’ve been eagerly awaiting the time when my taste buds were back in action so that I could try it.

Yum! This is really really good. The honeybush proves to be an excellent base for the flavors here. I can taste the cake flavor which is rich and buttery tasting, I can taste the pineapple, and I can even taste a little bit of the maraschino cherry. I can even detect the caramel-y brown sugar… yum!

Sounds delicious! I haven’t opened mine yet—I should soon!

Yes, you should! It’s so good. I’m writing my review of it for TRB now…

As I am drinking this, I have decided that I should up the numeric rating a bit, because… it gets better as I make my way down the cup! The flavors really meld together so well.

Yummm—Maraschino Cherries! There’s a fine line between maraschino cherries and cherry cough syrup and I’m happy to say that the cherry-ness in this tastes like pure maraschino cherries—which I love because it reminds me of Shirley Temple drinks and childhood. :)

I do taste pineapple, sugar and a hint of cake. This is kind of like a canned fruit salad. It’s sweet and candy-like but not cloying. I wish there were more of a cake-y taste but I’m enjoying this a lot—it’s great as a dessert tea. It’s almost like Pineapple Ambrosia but without the marshmallow fluff.

I detect no pipe tobacco-ness or woodiness like I would with a rooibos. Honeybush is great! :)

I so prefer honeybush to rooibos.

Yumm…love your description of this tea. I may have to try it for it’s maraschino not cough syrup cherry! I was a bit worried, but I should have known Frank could do it!

Thanks Jessica for sending some of this my way to test out.

I was so impressed with the dry scent of this tea that I sniffed (huffed) the bag while the water was boiling. I love that there was a large chunk of pineapple mixed in with the honey bush. I love how sweet tasting this tisane is without any additions necessary. It tastes like a bite of sweet cake with sweet glazed pineapple baked into it and a slight hint of cherry. Yum. This was great hot and even better as it cools. I can’t wait for more of Frank’s honey bush blends!

I had my 1st Pineapple Upside-Down Cake about a week and a half ago. It was good when I avoided the cherries.

I have to avoid the cherries too. Love cherry flavoring, just not maraschino cherries!

I can’t stand anything cherry flavored… except for fresh Bing Cherries.

Today was one of the more brutal work days I’ve had in a while, probably made more so by the fact that I’m planning to take tomorrow and Friday off to work on gathering up my tax info and if I have time after that do some writing without having to snatch 15 minutes here and there. In any case, it was pretty much back to back stuff and I’m exhausted.

That accounts for the non-recording of my teas, and also for the non-reading and liking and commenting of notes. I will try to catch up but I might just have to jump in where I left off, and if so, apologies all around.

In any case, I’ve decided to bump this down just a bit. The more I drank it, the more the honeybush became one of the main flavor components, and it was a sort of a woody, cedar chippy one that distracted me from the cherry/pineapple/cake flavor of the blend.

So while I give it many points for nailing the flavor, I have to mark it down on the overall experience, because although I don’t mind honeybush having a bigger role than rooibos (as in general I prefer its flavor), this one was less of a sweet, mellow flavor base and more of a reedy, woody one.