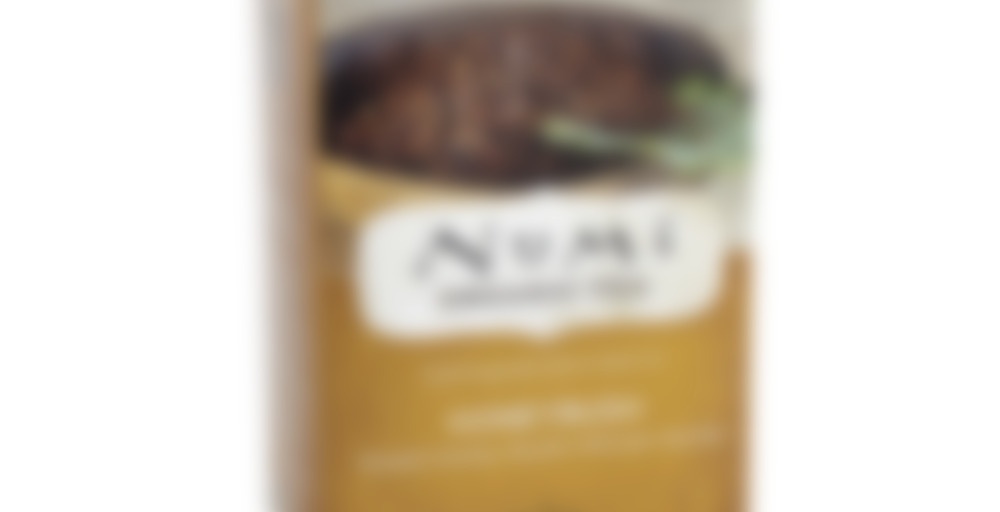 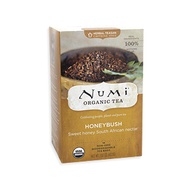 by Numi Organic Tea
73
You

From South Africa, our organic Honeybush is a flowering shrub that yields a rich earthy brew with sweet honey overtones. This secret healer is rich in antioxidants.

The kitchen has been uncovered from the plastic it was encased in! Yay, I can use the stove and the kettle now!

I have always been curious about honeybush, so when I saw that my fiancee had this in his assortment, I snapped it up because he didn’t really want to try it for himself.

It brewed up as dark as any black tea would have brewed up. Maybe even a little darker. It looks almost like coffee in my cup right now. It smells a little twiggy, but not earthy. Just twiggy.

The bag said to brew it for 5-6 minutes, so I hit five and decided that was long enough. Hmmm. I’m not quite sure what to say for this one. It tastes very smooth and non-twiggy which was a nice surprise. The few times I had roobios it tasted very twiggy and woody. Since honeybush is supposed to be similar to roobios, I expected it to taste similar to it.

My first taste on the tip of my tongue hit a bubblegum note, but I think that must have been a fluke. I taste no hint of bubblegum the more I sip on it. I think I am getting a faint sweetness on the back of my tongue, but I’m not positive.

It doesn’t taste like tea, but it tastes good. The packet said it was good with milk and I am wondering if I should pour a little in just to try it that way since I’m not getting that much flavor out of it. Just smooth and slight sweetness. I’m taking a few bigger gulps and I am getting a sweet aftertaste now.

Hmm…I think I like it how it is, but I want to add a splash of milk since I do want to try it both ways and I only have one tea bag. The milk adds the creamy mouthfeel and while the sweet doesn’t pop out, it does make it feel like a dessert tea. I feel like I just indulged on something more along the line of a bit of caramel or some toffy. I know I didn’t, but it feels like I did. The aftertaste I get now screams caramel.

This makes me want to try some flavored honeybush teas because if a bit of tea can turn the base into caramel, imagine what a little bit of added flavor could do.

If I ran across this in the store, I would get a box so I could double brew it and try it iced!

Is it honeybush in general that you dislike, or specifically this one? If specifically this one, what was it about it that was different from other ones? Paper bag taste? Something else? Thanks! =) (You say in your profile that you’ve yet to find a rooibos you can stomach and honeybush is often considered its close cousin, so now I’m thinking maybe it’s just honeybush you don’t like, but…doesn’t hurt to ask, eh?)

I would have to say it is this specif on since it is the only one I have tried. It is similar to various rooibos I have tried in that there is a flavor I can’t describe that that makes my throat close up (not quite gag) and I cannot finish the cup. It is a shame because I really wanted to like it. There are so many tasty sounding blends using rooibos and honeybush.

Aww… I’m sorry it didn’t work for you… =( On the other hand, this is the straight flavour. Maybe a yummy-sounding blend will be flavourful enough to overwhelm the rooibos or honeybush base enough for you to enjoy it.

First time having straight honeybush. It’s… good? A lot like rooibos but not woody? Smells more like honey than it tastes. My cup was drying which made me sad but that might be because I accidentally let the bag steep for several minutes beyond the suggested 4-5. Eh. Enjoyable enough as a late-night brew.

That is a great description of honeybush!

Not sure if joking. I was a little lost with this one.

I’m currently looking for more variety in pregnancy-safe bagged teas that won’t trigger heartburn and actually appeal to me despite my numerous pregnancy induced food aversions. It’s not an especially long list. I haven’t had too many bagged honeybush teas, but I’ve tried several loose varieties. This one is quite good. It’s smooth and woody and just a bit sweet. It doesn’t seem astringent or sour like some honeybush teas I’ve tried. So far I’m quite impressed by Numi’s teas. I have their rooibos chai yet to try and the rest of the sampler pack will be saved until after the baby comes.

Sweet, and thank heavens my meal plans come with this tea on occasion. Almost like honeysuckle.

A coworker brought me a bag of this, this morning. Naturally sweet. Not a bad taste!

You know, I’m glad I snagged this one when I had the chance. Honeybush is iffy for me, and the thought of a plain one didn’t sound that good to me, but this way I was able to see what its naked self is all about. And it’s not bad, really! I do get the honeyish undertones, almost no woody notes like I get from rooibos. It’s pretty smooth, no bitterness. I added some half and half and while I didn’t see stars, I enjoyed drinking it.

This makes me not as wary of honeybush anymore.

My kids love this one.

I have new filterbags of Numi Honeybush, so though I reviewed an old bag a while back, I am treating this as a new tea.

Well, this is definitely better than last time, so perhaps the previous bag was stale?

The liquor is light amber. The dried filter bag was a bit stinky. The brew tastes fine, but I have never really developed a liking for honeybush, it seems.