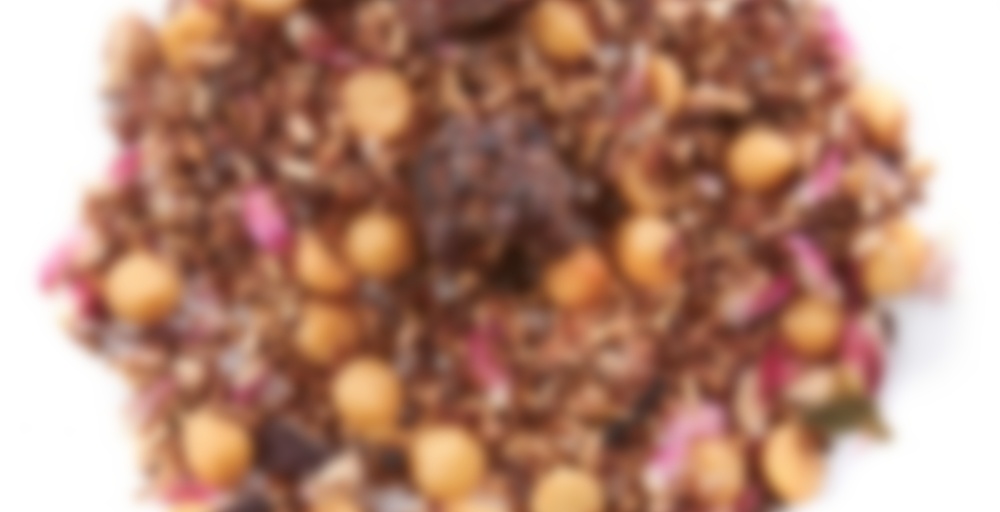 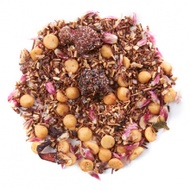 with 72 Ratings Rate this tea Rate This Tea

Cream of the crop.

It’s no secret raspberry cream pie is the star of every dessert party. This springtime treat has a habit of flaunting its flaky crust, creamy filling and fresh raspberry topping. And we fall for it every time. Beautiful on the outside and satisfyingly sweet on the inside, this decadent rooibos blend is no different. With white chocolate, raspberries, rose petals and pink sugar sparkles, there’s simply no resisting it. And with next to no calories, this is one indulgence you can feel good about.

I’m not convinced that I have ever tried this tea. I located it somewhat recently in an odd location (I think it was in the last bin from my room before I got married) along with a couple others. And I’m pretty sure all 10g was still in the bag. Luckily, smelled fine! And the flavour isn’t so bad either. It is sweetened a decent amount, which probably helps, but it did taste reminiscent of raspberries and cream (I’m uncertain about the pie aspect, though). Not bad! But, not a favourite. It’s still rooibos, albeit green rooibos.

Friday 2/5 3 sachets hot and plain in a 16 oz tumbler. This is from an old box of sachets. I used to enjoy this one but it is soo sweet and rooibos base is not a type I enjoy.. I wish this one was more like DT coconut cream pie which is an oolong base.

While there is some artificial-tasting raspberry to it, it is overwhelmingly overpowered by the creamy, sugary notes. I feel like I am drinking powdered sugar. Maybe if someone really enjoys sweets and/or sugary drinks they would like it. This tea is not for me though and I would not purchase this one again. I also definitely would not recommend it to other folks who are sensitive to sugar, as sugar seems to be a strong ingredient in this tea.

You are walking down the street, and you look into the window of a pastry shop. Sitting there on the second shelf is a small raspberry tart, a thin and buttery crust with a light,
white chocolate filling, and crisp fresh raspberries on the top. The kind of tart you rarely would treat yourself too. That is the taste of this tea.

Recently dessert teas from DAVIDsTEA have been just shocking me with the way that a water based beverage could make a dessert that does not taste watered down.

My critique would be that it was so much like a raspberry tart, that I had to finish my cup in two sittings. Luckily I had it brewed in a tea press and it was kept warm. It is a very rich tea, and similar to a very rich dessert you cannot have too much at once.

I got a sample of this in the advent calendar. I was really looking forward to this one, however I was really disappointed. I guess when I read raspberry I figured tartness… but this is far from it. It’s just sweet I found. And not a good sweet. I guess I get where the “cream pie” comes in…. but I miss the bold raspberries. I hate to say it…cause there’s only been one other one by Davids tea so far I haven’t liked (ginger turmeric tonic)… but I ended up dumping the rest of this out. Too sweet for me and too blah.

So like others have mentioned, this tea smells like some sort of berry cough syrup. But that’s not necessarily a BAD thing—I actually enjoyed the smell as a kid. There’s also a creamy note, probably from the white chocolate.

When steeping, it turns a light brownish color. There’s a noticeable oil slick on the top of the tea, probably from the chocolate melting, that looks a bit unappetizing. My first sip was underwhelming—it tasted GOOD, but lacked flavor. So I let it steep for another 5 minutes, and tried it again. I definitely can taste the “raspberry cream” part of this tea. It’s still pretty light and muted, though. Reminds me a bit of Strawberry Rhubarb Parfait, without the rhubarb of course.

If you like a strong, bold flavor in your tea, a satchet of this won’t be enough. If I had this in loose form, I would have doubled the amount of tea. Because after steeping for 10 minutes, it’s still pretty blah.

Not really excited to try this again unless I get another sample. Strawberry Rhubarb Parfait is a better choice, IMO.

David’s Tea tends to be pretty hit and miss for me, but this one was a hit! I can’t say it really tastes like raspberry, but it does have a nice creamy, fruity flavor that thankfully isn’t overpowered by the hibiscus. I especially like it with a splash of milk.

I drank this a few days ago and I remember it being a pleasant tea. The rooibos wasn’t overpowering and the hibiscus was pretty mild and it tasted sweet and berry-ish. I’m not going to jump for joy over it, but it was good.

Ick! Not a fan. It makes my mouth pucker like I just sucked on a lemon, which is weird since it doesn’t taste lemon-y. It is just too tart for me.