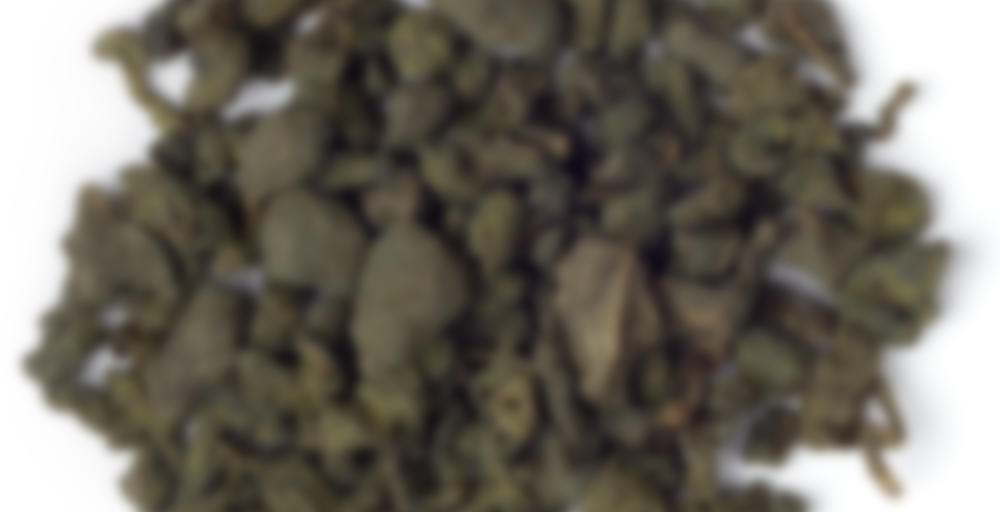 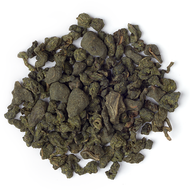 with 53 Ratings Rate this tea Rate This Tea

Ginseng for joy
This ginseng-coated tea looks more like moss-covered pebbles than tea leaves. And it tastes just as wonderfully weird as it looks: rich and crisp with a hint of shea butter and a sweet, lingering ginseng flavour.

I hear ya! Good luck!

I hardly know how to describe this one.

Sweet and crisp, as the write-up goes. Lingering. Almost floral — really hard to describe. Really good. This one shoudl be good for at least two more infusions.

At first, when this was hot, I quite enjoyed my cup. The ginseng sweetness was interesting, but certainly not typical of my normal tea rotation. It definitely lingers!
But then when it cooled I started to dislike the fake sweetness, because it reminded me of splenda, which I cannot stand the taste of. Overall, I give this one a thumbs down. Not something I’d try again, even if it was offered to me free of charge.
Although… the oolong part was nice. I suppose that is about the only positive thing I have to say here heh

Oh no! I just sent you a ginseng oolong too, LOL!

bah, it might be totally different! I’m excited to compare now :P

They told me at the store to resteep this one for sure. It changes flavour with each steep. The associate the other day told me she is most happy with the 7th steep. I never get that far but have decided upon trying this one that I will actually make the first steep and pour it out as I did really enjoy the second and third steep.

I find the second and third infusion of oolongs to be the best too. :)

So tonight I decided that it was high time to sample my ginseng oolong sample from Teavivre, and alongside it, the sample of ginseng oolong that I recently picked up at DavidsTea! I brewed each according to the given instructions to see how they fared compared to each other.

I used approximately the same water:leaf ratio for this tea as for the Teavivre version (about 2 tsp for 2.5 cups), and noticed that the colour/aroma definitely took quite a bit longer to develop in the DT version, which is likely why it required 5 minutes instead of two.

The aroma of this cup is sweet and just sliiightly seaweedy. It’s interested, both my roommate and I noticed that the tea smells and tastes much like a fried seaweed snack we tried and loved last year. Basically, salted and fried up crispy seaweed. I’m wondering now if there was ginseng in it, or if it’s just a coincidence that the two are similarly scented/flavoured. It’s actually quite an interesting, tasty flavour, kind of toasty and delicious, and then an intense sweetness emerges, which must be the ginseng, along with a mild oolong flavour. I can’t say that I’m the biggest fan of the sweet aftertaste, as it reminds me of licorice and artificial sweeteners, but I don’t find it quite as bad as either of those, so can tolerate it. So overall, this is actually a pretty yummy cup. Perhaps not the first tea I’d go for given a choice, but it’s certainly worth trying!

I’m glad you reviewed and compared both of them…will save me a few dollars, I won’t bother to try DT’s version since there are no major differences…

There may be some subtleties, but I’d say if you’ve tried Teavivre’s, you definitely don’t need to try the DT version. Teavivre is more bang for your buck, I feel, that’s the biggest difference.

This is tasty! I was cranky with the ginseng green I got from Adagio, in large part because the predominant flavor was ginger and not ginseng. No such trickery here. I was a little spooked that the label said to steep this for 5 mins, but the flavor is perfect.

The tea looks like little mossy rocks. I showed them to my housemate and he thought they were cool too, even though as he said it “doesn’t look like tea”. I watched this one brew in the steeper. In the first couple of minutes the layer of ginseng starts floating off, and the water gets a tiny bit cloudy. After that the oolong leaves themselves start to unfold, tiny and leafy. Unlike most ball oolongs which really unfold during the steep, these stayed somewhat ball like. They almost looked like little pieces of rolled up seaweed floating in the water.

I love the flavor of this. The oolong flavor is at the forefront, tasting a bit like a roasted tikuanyin. After that there’s a hint of ginseng and a sweetness that reminds me a bit of stevia. This tea also feels really cooling inside my mouth.

housemate is right, it doesn’t look like tea! I have only tried Teavivre Ginseng oolong and I loved it so much! I find that ginseng compliments oolong in a very unusual and almost intriguing way :-)

It really does TheTeaFairy! I only got a half ounce of this to try, but I really liked it and may get more in the future.

I bought this in the little sample size (the individual cup size they sometimes have near the cash register). Ginseng doesn’t normally agree with me, but I was too curious to see what this tastes like to pass up at least trying it. I’ve been hesitating to try it for so long that I deliberately put it at the front of my cupboard so I couldn’t continue passing it by.

Thankfully, so far I am not experiencing any ill effects, maybe there isn’t very much ginseng in it? The oolong base is lovely and the ginseng taste isn’t overbearing, it actually reminds me of a spice? Hmmm…Tarragon maybe? I’m not sure.

The more I drink this first steep, the less I like it. The aftertaste lingers in a strange way, and is starting to make me feel a little weird. I don’t think my tummy likes this very much.

Even though my first steep didn’t agree with me entirely, I proceeded to do a 2nd and 3rd steep, which didn’t seem to bother my stomach as much. Not something that I’d buy again because of my reaction to the first steep. It’s not bad, but there are so many other teas out there that I’d prefer to drink.

Liquor: Green with some cloudiness, with an aroma of ginseng leaf and oolong tea.

Flavour: A delicious tea with a great darker jade oolong character (similar to Tie Kwan Yin), complete with piney overtones and slight shea butter notes. The liquor has a rich crisp oolong taste with a strong and pleasing ginseng aftertaste. It lingers well and is excellent for several quality steepings. The first steeping has a very strong oolong character.

Licorice-like sweetness fills the mouth on the sip. Oolong vegetal taste faintly in the background.

WOW! As a huge fan of the Quangzhou Milk Oolong, I was really excited to try this new oolong, and I wasn’t disappointed!

The tight “mossy pebble” leaves are perfect for adding to a travel mug and just topping up the water as you go along. It’s definitely the greenest liquor of all my oolongs, and something about that makes me happy.

It’s a sweet, slightly creamy tea with a subtle almost honeysuckle undertone. After drinking, it leaves a lingering sweetness on my breath, which in turn leaves a smile on my lips. I’d never had ginseng before, so never would have thought to combine it with oolong, but I’m really in love with the combination!

Not my cup of tea. This tea was a reco from my local Davids. The sweetness that comes through this tea reminds me of artificial sweeteners. Sadly, not even interested in trying a resteep. Will not be repurchasing.