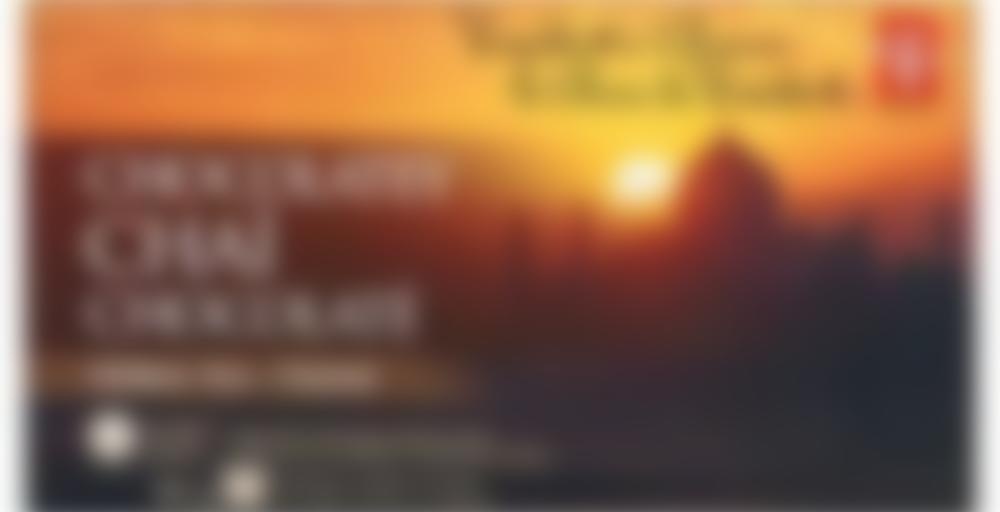 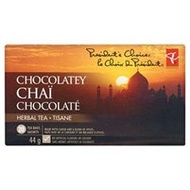 by President's Choice
68
You

A fragrant herbal blend with a rich chocolatey taste and chai-inspired spices. Processed and packaged in Canada.

This really is a good, inexpensive, chicory based tea. It’s more chocolate than chai masala, but that’s OK.

Definitely something I’d consider getting again, although Steam Tea House’s After Dark is really yummy, and more full of spice flavours.

This one surprised me too when I had it… although I did pass a lot of it along recently.

Having Too Much Tea™ will cause that “passing along” action you mention. :D

This is actually extremely flavourful! The chocolate is very deeply flavoured, with dark undertones and a little tiny bit of spice from the chai. It feels almost creamy without any cream. Super rich!

Thank you Missb for sending me an almost entire box of this! Yaaay!

Ok, I am surprised by this! Great find yvonne :-)

This tea was really, really good! Seriously! You guys need to get some…I’m craving it again right now actually! Might have to stock up on this.

It’s just so intensely, richly chocolatey…it rivals even Davids or DTT in the chocolate department. Almost felt like I was drinking a thick hot chocolate.

My daughter’s Dad loves this stuff, and so I bought some to stock the house for him. He’s had other things though the past few times he’s visited, so I thought it was time to pass it along. So glad you enjoyed it! It’s really inexpensive stuff, too.

Thank you so much for passing it along to me! I just absolutely adore it and it looks like it might become my new staple teabag :D I can see why he likes it so much, hehe

Blech. I don’t know if I realized this was herbal when I bought it but it was a mistake. Down the drain and the rest of the bags are getting dumped. It doesn’t taste like chocolate or Chai.

ewwww, i have a chocolate chai by tetley that isn’t a herbal and it is not great either.

By which I mean, avoid at all costs.

Yikes. Thanks for the heads up.

First, I received a SURPRISE in the mail today from Jillian! Thanks Girl!

I can’t say as I am a fan of this smell tho. It’s smells like Chocolate Coffee with CUMIN in it…yes CUMIN. Even tho I don’t think it actually HAS Cumin in it but for some reason that’s all I can think of. It’s extremely dark in color…almost thick looking.

I’m getting a fake chocolate bark-like taste…it’s a tad sweeter at the end tho.

I’m drinking this plain. I am going to rate it pretty low but I am going to attempt this again…maybe with the assistance of some chocolate soy milk or something…lol…

Glad I got to try it tho as I haven’t had much from the company yet. Thanks Jillian!

I think the chocolate-bark you’re tasting might be the carob, which is a chocolate substitute. I wasn’t terribly thrilled with this one either but I can tell you that it does taste better with milk. :)

I usually like Carob, actually, but yes…I can see what you are saying! :P I am going to try it with milk! Thanks!

sighs If this tea tasted as good as it smells it would be heavenly, but unfortunately it doesn’t although the spicy taste isn’t unpleasent although really it’s too coarse to have without milk.

I don’t smell anything cuminy, thank GAWD. Eugh. I do get minor spiciness, some decent carob with a distant whisper of cocoa. They show ginger and clove on the box, and list ginger in the ingredients, but I’ll be steeped if I can taste any.

Lessee … roasted chicory root (ah, bitterness and barkiness), carob pods, spices (how mysterious), natural flavour (of what, I should like to know), cocoa shells, ginger, licorice root (gag — except I can’t taste it, either), stevia leaves, cocoa.

Usually I run away from anything ‘Chocolatey,’ as it tastes fake.

This is not a disaster. It’s not brilliant, either. A bit like spicy cardboard with carob rubbed into it. My teabag’s been in the cup now 8 minutes and cooling off. It might be better brewed in a pot and kept hot. It gets sweeter and deeper the longer it’s steeped. The carob smells medicinal to me, but then I’ve also encountered it in various health tisanes, like Traditional Medicinals’ PMS Tea. The Chocolatey Chai tastes better than PMS Tea, but then one expects mediciinal teas to be a little harsh. Yeah, cardboard. I go back to cardboard from the back of the spice rack with some carob and cocoa on it.

Okay, at the 9-minute mark it gets bitter and barky, probably from the cocoa shells and carob. I know, 9 minutes is a bit extreme …

I expect I’ll finish the box, if only out of a sense of duty and to ration out my dwindling stash of Super Chocolate from David’s Tea, but I wouldn’t recommend any of my buddies waste their time on this one, ‘improved’ or not.

Maybe if I steeped the box instead …

I want a chai that will warm me to my toes. Lovingly singe my mouth with ginger. Not upset my stomach with too much black tea. This is my Quest.

Haven’t touched this stuff since that first cup. Into the bin it goes.

I thought this was black chai when I picked it up, but realised too late that it’s herbal! Ah well … it smells quite rich and decadent. I think I like it more than the Four O’Clock Chocolate Spice, which has similar ingredients. I would love to try it with some vanilla soy milk, as I have a feeling that would make it absolutely delicious. I don’t know if regular milk would work in this, but I can never bring myself to add cow’s milk to herbal tea. It just seems wrong to me. ;) A touch of sweetener of some kind would probably go very well, too.

This was my first attempt of a chocolate flavoured tea. I was sceptical at first because I always associated chocolate beverages to be thick and creamy and was unsure if I would like the texture and taste of chocolate in a tea form.

to be honest, I don’t know what this taste like. It wasn’t chocolate, and defiantly wasn’t chai. Its tasted like the bottom of a hot chocolate with the chalky powder on the bottom and someone stuck a cinnamon stick in it. it was not pleasant and I wouldn’t punish anyone with this tea.

my sister found a way to drink this tea. Instead of drinking it hot, leave it to cool down or pop it in the fridge. add milk and sugar and it taste like a cinnamon hot chocolate.

A pleasant herbal blend with a chocolatey taste and creamy richness. I like to leave the bag in the cup to extract all of the flavour; however, it tends to develop a viscosity toward the end that is a bit too much.

I bought this tea very excited – I love chocolate, I love chai, what could go wrong? Apparently quite a lot considering I couldn’t even finish the one box (and my maxim is waste not, want not).

Honestly it just came down to the fact I didn’t (couldn’t) like the taste – much too “chocolatey” and barely any chai. And I put the quotation marks in there because it didn’t taste like chocolate, or even close to. I knew they were going for a chocolate flavour, it had the bull-bodied richness of chocolate, but unfortunately tasted very dusty to me…after I’d take a sip I’d find myself rolling my tongue around trying to figure out/get rid of this strange after taste. All in all, yuck.

UPDATE
After reading some other tasting notes where teas were described as having a “saccharine” taste I realized that this was the after taste from this I couldn’t really name. It tasted like dusty tea with a cloying-bitter saccharine after flavour.