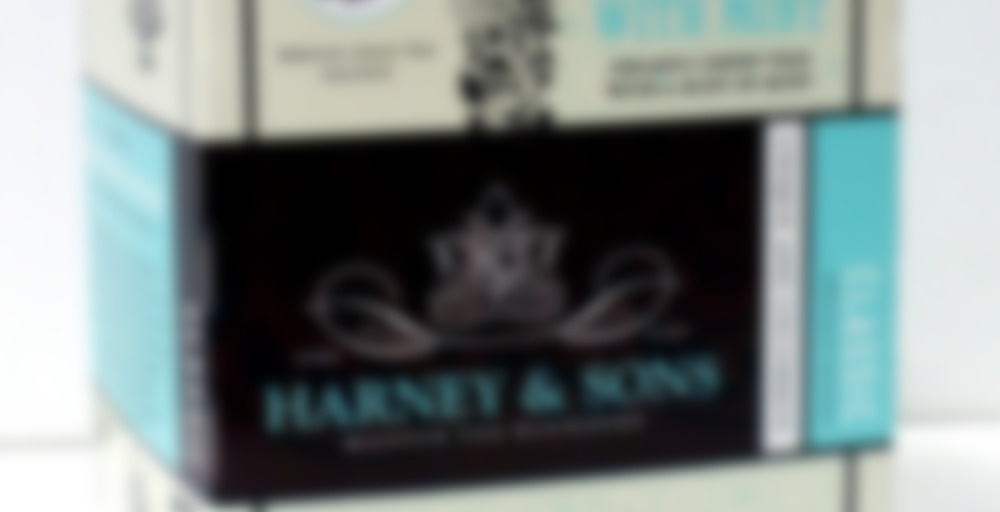 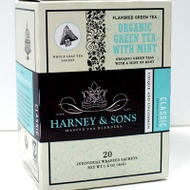 Organic Green Tea with Mint is exhilarating! This classic with a twist is a traditional blend of full leaf organic Chinese green tea with a hint of mint. The gentle addition of crisp peppermint from Oregon complements the clean taste of green tea, adding a bit of refreshment. A contemporary take on the classic, this brew pours out green tea perfection.

This was a sample that came with a Harney and Sons order from some months ago. I kept meaning to get around to trying it, but I am glad I didn’t because it made a nice tea to share with oldest daughter tonight after we went out for Mexican food. Drinking green tea together each time she comes has become a bit of a tradition, and she loves minty things.

I steeped this at around 175F for three minutes. That is my standby green tea steeping method unless I have seen something that leads me to do otherwise.

This is a really pretty color, and since it has been over a hundred degrees for the past few days, my first thought was that this would probably be pretty awesome iced. We drank it hot, though.

The green tea base and the mint are really well balanced. This is a very smooth green tea and I didn’t detect any bitterness or bite in it. I wonder if sme green tea lovers would find it bland? But for me, it was very pleasant. The mint is very pressing but doesn’t overpower the green tea. I have had mint tea before that left me feeling a little TOO tingly, like I might never taste anything else again ever!

We made a resteep of this sachet and that was very pleasant, too.

I am glad we got to taste it, and I wouldn’t be surprised if my daughter asks me to order some for her. I do not usually drink mint tea, other than my Moroccan Mint from Tin Roof Teas, so I doubt I would order it, but if you like mint greens this one is very good.

I think your review said it well. I just got a sample of this with my order a few months ago and was pleasantly surprised, as I usually go for black loose tea.

My final sample from my latest H&S order.
I like Mint.
I like herbal Mint teas, I like Mint gum and I certainly like Mint Juleps.
However, Mint in my green tea…eh, I have found that it seems to take over and you can not even taste the green tea.
So, in the past, Never been a fan.
I see others who reviewed this tea said that this tea was not Minty enough.
For me, it was about right.
I can smell the green tea and the mint.
I can taste the green tea and mint.
But, neither over power the other.
Am I converted to drinking Mint Green Tea all the time.
No.
I still see the two as separate occasion teas, but, if I were in the mood for a Mint Green Tea, it would be this tea.
I think they got the blend just about right.
The Tea is a lovely golden blond color.
Another tea that I think would be nice to try cold brewed.

It is saturday, early evening and the boyfriend is cooking something or other involving lentils. I’ve been editing all day (booooring!), and it occurred to me that the Sample of the Day would have to be now, because when we’ve eaten, I’ll probably be elsewhere watching tv for the rest of the evening.

I’m not really that fond of mint. I can eat it in most things, and I can tolerate it in teas although it’s not something I’ll ever really seek out, I don’t think. I absolutely cannot stand it as the filling in After Eights or similar chocolates, although there I believe it’s more a question of not liking the cream than not liking the mint.

So mint herbals is something I drink when I’m ill and real tea tastes funny, and it’s not something I would be likely to seek out as flavouring in tea on my own.

The aroma is quite minty. It’s very like a basic mint herbal only a bit weaker. Probably the green tea holding it back a little. I can’t find any notes of green tea anywhere in the aroma though. Only mint.

So the aroma isn’t really that promising for me, but the flavour turns out to be better than the aroma. The actual mint flavour isn’t really that overwhelming although it is still pretty strong, and here I can definitely identify the presence of some generic green tea of some sort. It’s not possible to discern any specific characteristics of it, other than the fact that it’s definitely there.

There is a whole lot of mint flavour, but the base of the green tea, and the fact that it’s detectable, is keeping the whole thing grounded a bit. A pure mint herbal, when the tastebuds are not hindered by illness, to me tastes a bit like a solution of water and toothpaste.

I’m thinking the name should probably be “Organic Green Tea With a Possible Hint of Mint But You’ll Have to Concentrate Really Hard to Actually Taste It” Some of this is probably due to work microwave and the inability to carefully control time and temp, but I’m getting a lot more of a bitter gunpowdery green flavor than any mint. It’s not bad, but one of the few—if any—H&S blends I don’t think I’d repeat.

The mint is quite light, which would have made for a nice cup but whatever green Harney has used for this blend doesn’t suit it at all I’m afraid. It’s bitter, almost like gunpowder and the mint definitely doesn’t compliment it.

Another VariaTEA share, and something that I could really easily/quickly finish off today without needing to pay it much mind. Also, it was just convenient having the teabag format at work when I was making something during our busy period today.

Honestly, this didn’t even taste like green tea to me though. Apart from the lightest bit of astringency in the finish, I’d probably have never known I wasn’t just drinking a strong tasting straight peppermint. So, not bad! Plus, bonus points for convenience.

Today was exam 4/5 and for the first time that I can recall, I blanked. I knew the cases that applied and I knew the issues but for some reason I couldn’t formulate a thought and then I panicked because I couldn’t which made my brain all the more cloudy and then I became aware of timing and it was a mess. When I finally started thinking clearly it was too late. Hopefully I scrape enough points together to do ok but that was torture.

One more exam to go. I haven’t gotten a chance to study for it so I need to try to get through whatever I can before 1 pm Friday when it starts. Then 2 hours to answer 50 m/c questions and then I. AM. DONE. I cannot wait. If I had the option to opt out right now and take a C, I think I would. Nothing sucks more than scrambling knowing there isn’t enough time to do what you need to do but still just scrambling.

Anyways, because the exams wasn’t great my mom told me she’d pay for me to order food. I got Mexican food and it was good but I am so full. So very, very full. Hence the mint tea. This is an alright mint tea. Nothing special. But the satchet is convenient every so often.

I’m sorry your exams haven’t been going as well as you’d like. Hopefully the last one is better!

Fingers crossed for you on the last exam! Good luck.

Second tea from my April Sips By box, 4 sachets of this tea.

It’s…not terrible. It’s not great. It’s a green tea with mint. The mint isn’t overwhelming the green tea but that’s about the only thing I have to say about it. It’s also giving me a headache, as green teas sometimes do so I’ll be distributing the rest to others. Overall, I’d rate the taste as ‘okay’.

This is such a boring tea to send in a subscription box. Especially in bagged form.

I know, right? At least the others are interesting. I may even pick up some of the Zest Tea I got. Still have one more to review though, an herbal. Also kinda boring, but new to me.

Apparently i want to get under 40 today haha. I’ve been drinking tea all day, logging when i get a chance in between meetings. I had a great night out with the guys from my former job – but it was a lot later than i expected, and on a monday to boot! So i’ve been drinking a lot today to re-hydrate heh. This is a pretty unexceptional, average cup of mint green. I don’t often want a mint green tea but i’d drink this during those times i wanted one, if that makes sense. Sometimes you don’t need a specaticular cup of tea…you just need reliable :)

What are you doing drinking all these green teas? Are you ok?

samples from variaTEA i need to work through :)

I got some of this in my Sips by box that arrived yesterday.