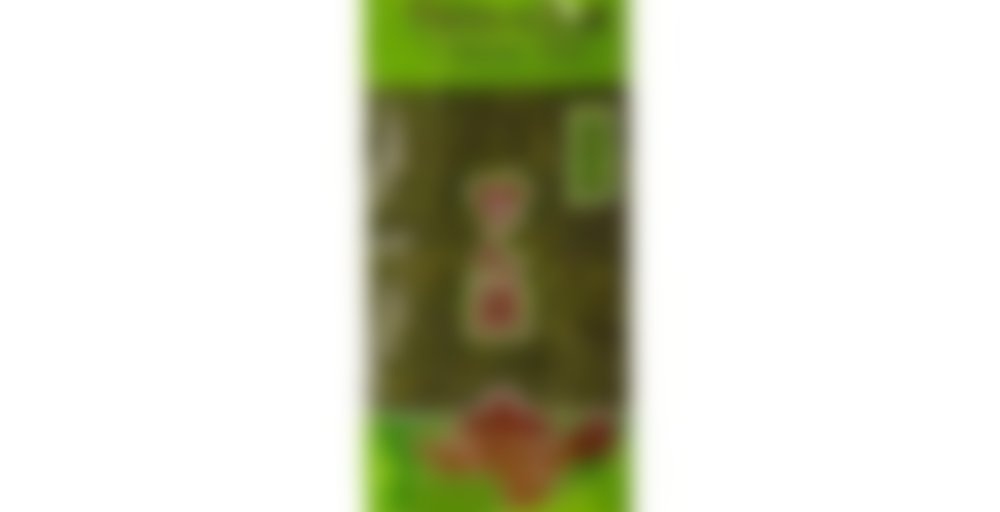 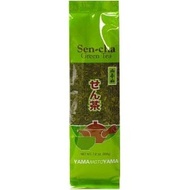 Sencha tea has a fresh, flowery taste, and is the most favored tea in Japanese homes. This family-size (200g) is suitable for daily enjoyment.

I learned about this ice brewing method (here: http://www.inpursuitoftea.com/category_s/159.htm) for green tea that I road tested with my good ol’ never ending bag of this stuff. Basically, caffeine and tannins are not as readily extracted in cold water, so brewing tea in cold water over a long period of time yields a sweeter, less stimulating tea.

I dumped four teaspoons of tea in the bottom of my three cup coffee press and filled it with a heaping pile of ice cubes. Then I simply waited for the ice to melt, and the tea was ready. This is obviously a beverage to plan ahead. I made it first thing in the morning and drank it at lunch, but it could just as easily be prepared the night before to be ready at breakfast.

The taste was sweeter, yes, but it was a little over-extracted to me. Perhaps four teaspoons was too much, since once the ice melted, the yield was just a little over two cups of tea. Also, the cubes from my ice maker are quite big and took a long time to melt, which equals a longer steep time. Next time I will try a mix of ice and water to shorten the steep time. I would also love to see how this turns out with crushed ice. Would it be awkward to order a cup of the crushed ice they use at Sonic?

I’m trying to be a good girl with the budget so I decided to save money on tea. I bought this at a Korean grocery store in Vegas. The first brew was about 1.5 min, which produced a thick and somewhat bitter brew. I tossed it and resteeped for less than a minute and it wasn’t much better. Tossed that. The water was about 160 when I brewed a third time just for kicks. I could better detect the familiar, fresh marine aroma I love but the tea was weak, considering the water temperature and number of brewings. Still, it was cloudy and very green.

I started over with a fresh “perfect teaspoon” and 180F water. Brewed for about a minute. Smells nice but still too bitter for my taste. I know I’ll get used to it, though. Right now, it’s like Ripple to an alcoholic- you know, when almost anything will do.

For the price, this tea is great. Deep steamed, so I steep it quick so it doesn’t get too thick or bitter.

Thick… that makes me crave matcha:)

Quite bitter with first infusion at 170 degrees. Next day, I did a 10 second rinse, then used cold water and a overnight cold steep. Much improved. Color was less cloudy after the quick rinse. Bitterness decreased and sweetness increased. Good everyday ice tea.

I probably drink this tea more than any other tea. Is it the best tea you’ll ever drink? No, of course not. But, it’s good, inexpensive, and widely available. It’s grassy and pleasantly bitter, with a nice bite to it. I usually steep it for about 2 minutes, and it can handle quite a few resteeps. This tea served as my introduction to Japanese green tea. I’ve since had sweeter senchas that were nice, and gyokuro, which is, of course, amazing. However, for an everyday tea, I’m always happy to grab this one. That being said, I’m going for the gyokuro tomorrow. :P

Though Yamamotoyama’s mid-level senchas are very good for their price, this “value” sencha isn’t actually much of a value. Even when purchased directly from Yamamotoyama, so that it doesn’t have time to sit on store shelves and get stale, I found it weak and unusually bitter. Doubling the quantity of leaves from one teaspoon to two doesn’t help. Not recommended.

I picked up one of the ‘big’ 200g packs of this tea from a Japanese restaurant-cum-gorcery-store in Manchester, as it was very cheap and looked like it would make a good ‘everyday tea’ – the leaves looked nice and green, if a little broken, through the packet so I thought I may as well give it a try!

The dried leaves had a surprisingly clean, almost fruity aroma – for me, this was a little nice than the smell some highly prized green teas. In my initial brew, I used 1.5 tsp in ~250 ml, with a steep of ~2’. In all honesty, I was quite disappointed with the resulting brew – the liquor looked super-cloudy and it was VERY bitter (for my tastes, anyway). One positive, though, was that even these initial, very astringent sips, left me with lovely fruity after-tastes, convincing me not to give up just yet…

So I through it out, feeling a little embarrassed (particularly after seeing some of the other reviews on here, and seeing the advice given), and rebrewed used the same leaves, this time for 1’30". This second steep was much better – the tea was a lovely golden colour, nice and clean, with a fresh, slightly marine aroma. The tea tasted wonderful too – those classic apricot notes were present, along with a little seaweed like after-taste. As it cooled, the tea became a little sweeter and the mild astringency fell away.

As the leaves were still lovely and aromatic, I thought I’d give them a third steep for 2’ – a good idea! The resultant liquor was a charming yellow-green and had a lovely, marine aroma. The tea still had the fruity, apricot notes that earlier brews had, but it was a milder cup (which suited me fine, now that I’d finished my breakfast!). It still had some seaweed notes, and that gentle astringency.

I would certainly recommend this Sencha as a budget, everyday tea – don’t be expecting the world’s finest, hand-picked, lovingly crafted green tea – this is not that. But for a fresh, flavoursome drink in the morning, I can think of far worse!

(I’ll probably try brewing this again tomorrow, or maybe even later today. I imagine I’ll try giving it a quick rinse first, to reduce some of the initial cloudiness, and I’ll definitely use less tea or a much shorter initial steep – maybe only 60" or so.)

This “everyday” sencha from Yamamotoyama is an excellent example of why I love Japanese products. Supposedly this is the analogue to Lipton in Japan, where people drink sencha many times each day—and tea is much more frequently imbibed than coffee. So one might surmise that the flavor would be mediocre. Not so! It’s a very decent quality sencha, and the price is ridiculously low. I have consumed my share of these bags over the years, but when the Japanese grocery close to my former place of residence closed down, I pretty much moved on.

While moving, I discovered a secret cache of a Japanese tea, including this one, and though it is old (albeit unopened and stored in a tin box far from heat and light), it still tastes very good and brews up a delightful greenish gold. I’ll be plowing through this bag in no time, and now that a huge megaplex Asian market has opened up within walking distance of my new place, I’m sure that I’ll be exploring the higher grades from this brand as well—in addition to some more obscure offerings in the tea aisle—which is vast!

I suspect that the naysayers are not following the prescribed instructions (which I added to the profile). Note that Yamamotoyama indicates that a tablespoon (not a teaspoon) should be used for 200ml of water. Also: a very short steep is key to success with this tea. Finally, there are some small particles amongst the leaves, so you need to use a very fine-gauged sieve or filter to remove them in order to avoid bitterness.

Yeah for local tea! It has its good points – fun, try new things, no shipping :) and the bad – too available, spend all the money on tea and not food! :(

So true, carol who! I’ve been known to spend the bulk of my time and money during an alleged “grocery run” on tea! I’ve already been ogling the selection at this new megaplex, which appears to be run by Koreans, but they have covered all of the Asian tea bases… watch out!!!!

This is my everyday sencha, but I only have it iced (steep in fridge 4 hrs-overnight). Lovely ‘buttery’ flavor. Definitely not traditional, but if you add a tiny pinch of saffron when cold-brewing, it’s just amazing.