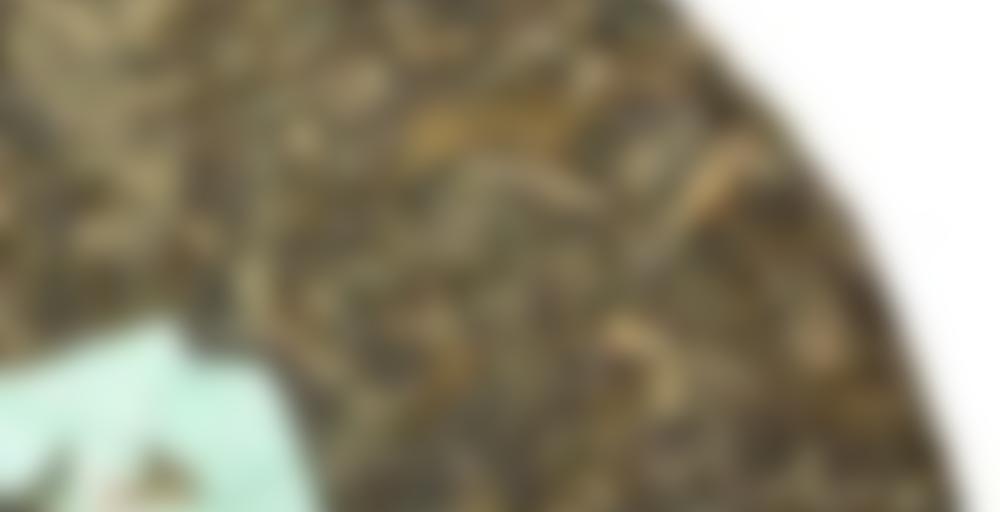 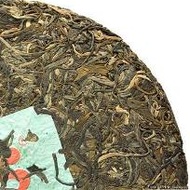 This Raw Puerh Cake is special for the two seasons resource from the same Arbor Tea Trees. Some are picked on March which we called “Ming Qian” or “Chun Jian” leaves. This is the best tea leaves in Spring Tea because it contains more nutrition and tastes mellow. Some are picked on September which we called “Gu Hua” or “Paddy Flower”. This is the best leaves for Autumn Tea because the aroma is stronger lasting longer. The Autumn Tea (Paddy Flower Tea) also has special flower fragrance. This Raw Puerh Cake is made by the two kinds of tea resource which were carefully blended by certain proportion.

I’ve been reading a book about tea recently, and I just went through a passage about sheng teas. Now I’m conventionally a shu person, but I was hit with a sheng craving that’s been lingering for a few days… luckily, I had a little bit of this left.

I’m doing homework and a little too distracted to do many steepings in the gaiwan, but I gave it a rinse, then did a 3 minute steep. I know shengs are really meant to be made in the gaiwan, and I would probably get so many more flavors if I did, but oh well.

Ahhhhh it hits the spot! So bright and high-pitched and woody. It reminds me of two things at once: 1) snapping a fresh young twig off a tree and chewing it, and 2) someone playing crystal glasses. (Speaking of which! https://www.youtube.com/watch?v=47TGXJoVhQ8)

It took me a long time to come around to shengs, but I think I almost crave them more than shus. I know shengs are the more “classic” pu erh variation, since shus have only been around since the 70’s, so it makes me excited to try even more varieties than I already have.

It is exactly my bedtime and I reeeeeeally shouldn’t be doing a second steeping of this… but I can’t do just one steeping on these leaves…. aaaaaagh…. tomorrow morning self, I’m sorry.

Thanks to whomever sent this to me! I’m so sorry, but I can’t remember who that was right now. I brewed this one up Gong Fu in a gaiwan on Saturday before all of the birthday shenanigans had kicked off, and to be perfectly honest I was very much not into it…

So far, as I’ve been exploring Pu’erh this year it’s mostly been ripe pu’erh so drinking this raw sample was a bit of a venture to me. And it’s kind of scarred me off a little, if I’m being honest. I tried a good variety of water temperatures and pushed through seven or eight different infusions but ultimately I couldn’t get past the combo of bitter and smoke notes that were just so strong, and so unappealing. Eventually, I also started to taste some earthy notes, a black pepper flavour, and some kind of bitter vegetal notes such as green pepper, but it just couldn’t redeem itself.

I mean, I’m not gonna stop trying out different kinds of Sheng but I’ve heard that most people overall have a strong preference for either raw or ripe and at this point I’m thinking mine is more in the lino of ripe pu’erh.

If you like some smoke, i guess this will be good, strong tea!

I haven’t been a fan of Sheng puerh in the past. But I also know that I haven’t come close to trying all that’s out there, so I still give it a try once in a while – when I’m feeling brave. So glad I did this time!

This is the best Sheng I’ve ever had. Perhaps I should specify, for anyone familiar with Kant, that it’s the most agreeable Sheng I’ve had. I am not expert enough of puerh to make a judgement as to how good it is ;) (Damn you grad school – messing up my simple thoughts…)

A perfect tea for autumn. I agree with previous reviews about the slightly over-steeped green flavor – but this tea totally works it. It tastes like an autumn forest. That’s the best way to describe it.
I recognize the usual characteristics of raw puerh that usually put me of, but in this particular tea, they are pleasant.

This is definitely a re-purchase for me!

This is indeed a pleasant sheng. You really can’t go far wrong with Teavivre’s product IMNSHO.

I’ve been waiting a while to get this out and try it. Also, thank you to Angel and the Teavivre team! For some reason I have a hard time with raw pu-erhs. The flavor is always off to me but this one is delicious! It has a juicy raisin flavor with hints of cinnamon and pine. The second steep turns a little more savory/sweet with light smoke notes. There is a soft bitterness that reminds me of a slightly over-steeped green.
I’m going to do more steeps but have to go away from my computer for a minute. I’ll edit it later with the other steeps :)

The dry leaves are very dark with green and white spotting. Being aged, it has lost most of color and calmed out. I am brewing with my sheng yixing pot at 212 degrees and 100ml. The liquor is a pale opaque amber. It has a light eerie glow. The steeped leaves expand to full and stemmed leaves w/ bud. They smell of tobacco, smoke, pine and a sharp green essence. They hint undertones of sweet rum and cured leather. I always enjoy Fengquing sheng and Teavivre never disappoints. The brew begins sharp and dusted. It quickly calms and becomes floral. It tastes of grassy wildflowers. Each brew still packs a punch but soothes with a sugary nectar. I believe with aged sheng the Qi does not die down but becomes slow acting. With this brew it slowly awakens during drinking. It is slow acting but still very prominent.

This was so gross. Even after multiple rinses, it smelled like liquorice and dirty socks to me. I tried a few steeps, even drank some, and while it tasted less foul than it smelled, it wasn’t worth continuing.

Thanks to Angel & Teavivre for a sample of this tea!
(I wrote this review earlier, but for some reason it didn’t go through. I’ll try to recreate it)
This is the taste of fall: dried straw, lights smoke, dried fruits, raw shrooms. There’s also a bitter greens edge to it, which I rather enjoy.
I steeped 5G in my 125ml yixing, combining 2 steeps to a mug. The first round made me want to take a nap, with a powerful head energy, watery eyes, & lots of yawning. The 2nd round was fairly astringent. Round 3 was lightly sweet & woody, reminding me somehow of sassafras root, with a head clearing peaceful mellow vibe, & I’m on round 4, with is sort of a sassafras/licorice combo, with a nice sweet aftertaste.

Way to go! I still struggle with one at times myself…

So proud of you, Terri!

Congratulations, that’s quite an achievement.

Many thanks to Angel of Teavivre for sending me a sample of this. I haven’t tried many pu’erhs, so it’s lovely to get some more exposure to them.

Upon opening the packet, the leaf smelled of tobacco, leather, cedar wood, raisins, and earth. There were some broken up leaves in the packet, but instead I took a large unbroken chunk that was probably about 1/2 the packet’s worth and put that in a 100mL gaiwan. I did a rinse for 15-20 seconds, then let it rest for about 2 minutes in the hot gaiwan before steeping.

The first 3 or 4 steeps were all a dark amber colour, and tasted smoky and bitter. Not the bitterness of beer, but a bit thinner and sharper, like it was coating my tongue. The tobacco impression lingered all throughout. I also got hints of cedar wood and birch bark. However, as the steeps progressed, the tea became more fruity. These steeps ranged from 10-20 seconds.

After the first few steeps, my mouth felt coated, but it wasn’t tongue-curling astringency so much as a fuzzy feeling all throughout.

I have to say that I think steeps 5-8 were the best, as the smokiness remained but the bitterness faded away. Instead, that stonefruit note came increasingly to the fore. These steeps ranged from 20-25 seconds.

However, steeps 9 and onwards were quite weak, with a significant drop-off in flavour from 11-13. At this stage, I had progressed from 30 second steeps to 3 minute steeps, without much appreciable increase in flavour.

This was a hard one to try and compare. The smokiness and bitterness and tobacco scent/flavour all had me stumped. I’m still not sure I can think of a character that fits this tea, but my husband and I were rolling the words around, and we both felt pretty comfortable that if we could think of a fictional character, it would have been someone from a Western/cowboy novel. Maybe one of these days I should pick up Lonesome Dove or something.

Did you know that Elmore Leonard started out writing westerns before he moved on to crime fiction? I’ve only read one of his novels – Out of Sight – but I’d love to read more.

Backlogging and based partly on my memory

This is, I believe, a sample I purchased from Teavivre at the end of last year (2013).

I used my standard raw pu-erh brewing parameters while steeping it: 150ml gaiwan; start water temperature at near boiling and work my way up to boiling; 15’ rinse, 30’, 45’, 60’, etc. Stevia added.

The tea liquor had a nice clear, yellowish color, with the standard raw pu-erh aroma.

The flavor was what I have come to expect from a quality raw pu-erh, although it is not a flavor I particularly like or can get excited about—too fishy, sour, or like bitter greens (I got that phrase from yyz’s review).

Although the wet leaf was largely whole, I noticed that there were a lot of long stems amongst the wet leaf, mostly stems attached to leaves (perhaps that is standard, I haven’t analyzed the wet leaf of enough quality raw pu-erh teas yet).

Overall, having had a number of pu-erh samples from a a few companies over the last 6 months or so, I find Teavivre’s pu-erh to be quality—the leaf is more or less whole, the flavor of the tea is clean, and the tea liquor has a good aroma. This tea is no exception. I still consider myself a newbie when it comes to pu-erh (having been drinking it for about for about 8 – 9 months), especially raw pu-erh, so I don’t have much here to say about this particular tea. I was able to get four good steepings out of it, and it could perhaps have yielded a fifth. Although I did not find anything ‘stand-out’ about this tea, I think it is a tea I could drink on occasion as a kind of tonic for my digestive system.