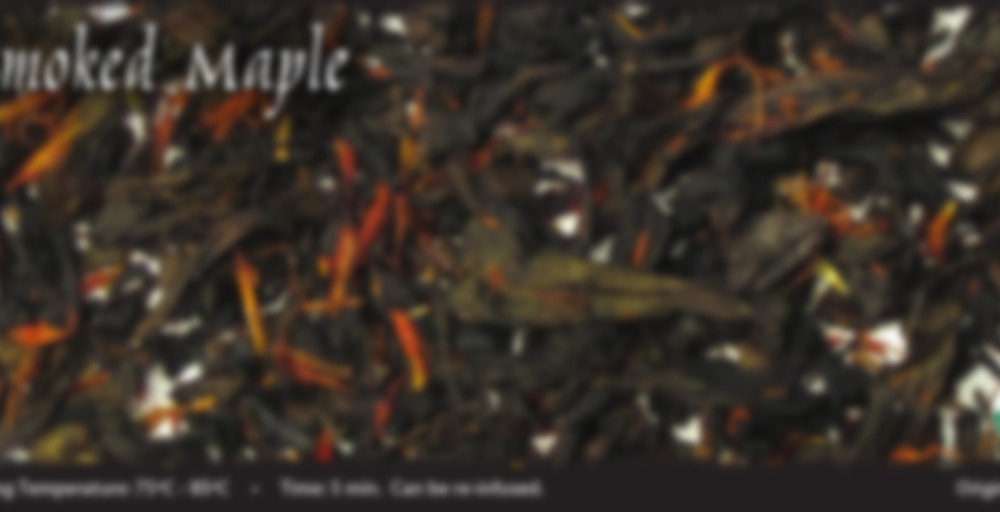 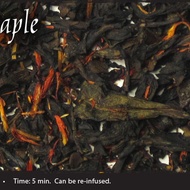 by Shanti Tea
85
You

A wonderfully bold but smooth, not bitter or harsh, blend of dark oolong and maple, a perfect pairing. While the oolong is bold, full-bodied, and lightly smoked, the maple is light, aromatic, and sweet. The combination of the two flavours results in a well-balanced, best-selling maple tea blend.

Another sample from MissB! I’ve always wanted to try Shanti’s maple teas! All of their teas sound really nice but somehow I never see them around Steepster. Smoky maple though… very promising! Shanti wants you to steep this for 3 minutes at 190 degrees.

Steep #1 // waited 20 minutes after boiling // 3 min
I always associate dark oolongs with charcoal flavor, but not this one! It’s a nuttier base. Sadly, there is only a hint of sweetness from the maple. And really no smoke I can see, but I like my smoky teas SMOKY. I like the idea behind this blend though.. it would be perfect if the flavors were more present, as it’s a nice combination with this oolong base.. maybe even more so than if it were a black tea base. The second steep had less flavor. If I HAD to choose a dark oolong to have in stock in my cupboard, I’d probably go with this one anyway!

I’m thrilled that you enjoyed this one, albeit with some caveats. Sadly this was gifted to me, and I’m really struggling with oolongs (they make me violently ill). It needed a good home! :)

Aw, it’s too bad you don’t get to partake in oolongs. But thank you again!

If you like the aroma of maple/maple syrup you’ll have to check out this brand new offering from Shanti! The Maple is AMAZING prior and during infusion. At the end of the infusion the little bit of smoke comes out to play, too, but the primary scent IS Maple.

The color of the liquor is that of a lighter oolong.

The taste is really good…I’ll just say that plain and simple…GOOD. It morphs. At first you can taste the maple…then the hint of smoke, then the Oolong, then back to maple. It has a juicier finish. I’m impressed.

Just a heads-up Shanti has other Maple selections, too, and I will be reviewing some of them here and over at Sororitea Sisters very soon!

LOVE me some Shanti!

Hmm this seems like it might be similar to Frank’s Maple Bacon due to the smoke… yum!

Yum! The maple smells amazing. I’m not getting a lot of smoked anything, although I do tend to not pick up on a lot of the more subtle aspects of tea. So it’s probably there, I suppose it’s just getting a kick out of playing hide and seek with my tongue. Which is just fine with me, I can play with maple instead. It’s all good. This is very very nice, smooth and a bit sweet. Makes the toes curl and the mouth smile.

This was a sample I got from MissB forever ago, and I don’t know why it’s taken me so long to get around to drinking it.

Silly me didn’t read up on this before I brewed it, and just assumed it was a black. I brewed it at boiling, was a bit surprised by the light infusion, then panicked on taking my first sip to find that it was clearly a dark roasted oolong. The panic didn’t last long, though, because even brewed at boiling this tea is incredibly smooth! No astringency whatsoever. The nutty, charcoal oolong flavour is most prominent (possibly because of how I brewed it) with sweet, lighter maple notes behind it which last into a lingering sweet syrupy finish. Now, we all know how much I love Butiki’s Maple Pecan Oolong, and even though this is quite different it’s still the closest I’ve come to finding anything resembling that wonder of a tea. As a result of that comparison, as well as on its own merits of course, it has gone straight back on my wishlist.

Thank you MissB for facilitating this discovery!

I’ve been seeing the word “vegetal” thrown around here as a positive thing.

I never thought I’d locate a tea I’d describe in that way and like, but here we are. On the Internet. Writing/reading this review.

Here we have a very sweet, vegetal, mossy, creamy, syrupy oolong tea. A solid, tasty contribution to tea-dom. I’m really glad that mtchyg hooked me up with this. I never would have chosen this for myself, but I really like it.

Oh! And the flowers in it are pretty.

Do they serve a flavor purpose? I have no idea. I just like to look at them.

I’m glad you liked this tea! I put in an order to Shanti last winter and I wasn’t very impressed overall but this tea was one that stood out for me. I love most things maple syrup and I know you have a sweet tooth. Glad to see it satisfied.

Thanks mtchyg for the sample! I’ll be the first to admit I do not usually go for flavored teas other than traditionally scented ones that are usually produced by piling flowers onto the tea leaves, then later removing them. But when I did a little trade I couldn’t pass this up because smoke and maple just sounded so right with dark oolong tea. Of course, I’m equally skeptical of teas that include flowers to be pretty rather than to flavor them, so seeing the pretty red-orange safflowers in this made me think “Okay, Lion, don’t be disappointed if it tastes cheap.” I mean, safflowers are usually in teas to look pretty, though of course they do impart some flavor.

With all my negative biases about “fashion teas” out of the way… let’s get to the actual review. I’m just brewing this in a cup with a large infuser basket. The aroma is very prominent even with the leaves dry and is mostly a sweet maple smell, though I do also smell the safflowers quite a bit and the overall effect reminds me of the lush plant-life smell inside of a greenhouse, and maybe somebody’s eating a hot bowl of maple oatmeal in that greenhouse.

I did not sweeten this tea, and it is mildly sweet on its own, though it seems to be from the maple flavoring rather than the oolong tea. The tea leaves themselves don’t have a very strong taste. Mostly I’m getting flavors of tobacco and oatmeal and just a bit of smoke/char. If anyone is missing the smoke flavor in this tea, I’d suggest not using sweetener or any cream. It’s subtle, but it’s there. The maple flavor is also more subtle than strong, and it is more sweet in the finish, which seems to create a unique contrast with the dry finish of the oolong tea itself. Texturally, this tea is a bit dry, but considering the earthy flavor spectrum it covers, and the mild sweetness of the maple flavor, it isn’t too bad of a thing.

I would say that as flavored teas go, this is actually a really good one. While I wish it felt more “wet” in the mouth, and that the tea leaves had more flavor to lend to the blend, it’s still enjoyable for a casual drink. It may be inspiring me to experiment with a drop or two of maple syrup in other teas. In fact, I’m getting rather curious now to maybe try smoking some tea myself and add a little maple syrup after. I’m kind of a DIYer so it’s in my curious nature.

But where convenience goes, I wouldn’t turn down this tea. It’s good. Reminds me of autumn. Nice in these lingering moments of winter. The resteep flavor is fine but missing most of the maple at that point, tastes mostly mineral, tobacco, and char.

I’m glad you enjoyed it. Adding a drop or two of maple syrup is a delight.

I didn’t get too much smoke from this but it was very drinkable with a slightly sweet maple undertone. Add in a few drops of maple syrup and enjoy!

I feel like I just don’t particularly have a taste for oolong teas. The maple in this was fantastic, but that oolong aftertaste just isn’t something I’m crazy about. It isn’t that I drink an oolong and thing it tastes bad, I just always feel like I’d much rather it be a black tea instead. Sigh. If you like maple and oolong though, this is probably perfect.

I have been going to a Tea and Hookah bar with my friends and getting a mysterious marshmallow tea. It is so good and creamy and tastes like marshmallows. A perfect relaxing tea for anytime. The trouble is that I didn’t know what type of tea it was.

Well, last time I was there my friend happened to know the worker there and got out of him that the “marshmallow tea” was their smoked maple tea with a touch of vanilla coffee creamer and agave syrup. Obviously I had to find the brand it was and make a tea note of it!

This one is going on my shopping list for sure!

I didn’t see that coming, a smoked tea!

A Really nice alternative to the typical breakfast tea – I don’t usually choose an Oolong tea for a breakfast tea, but this tea tastes very much like ‘breakfast’ to me with the lovely maple notes and the smoky character. There are rich buttery and nutty tones too.

Later infusions offer fewer maple-y notes, but I started to pick up on some peach-y notes and I enjoyed that too. By the fifth and sixth infusions, there were but mere wisps of smoke to the cup, and very little maple-ish flavors, but there were nice nutty notes and peach-y flavors to make up for it.