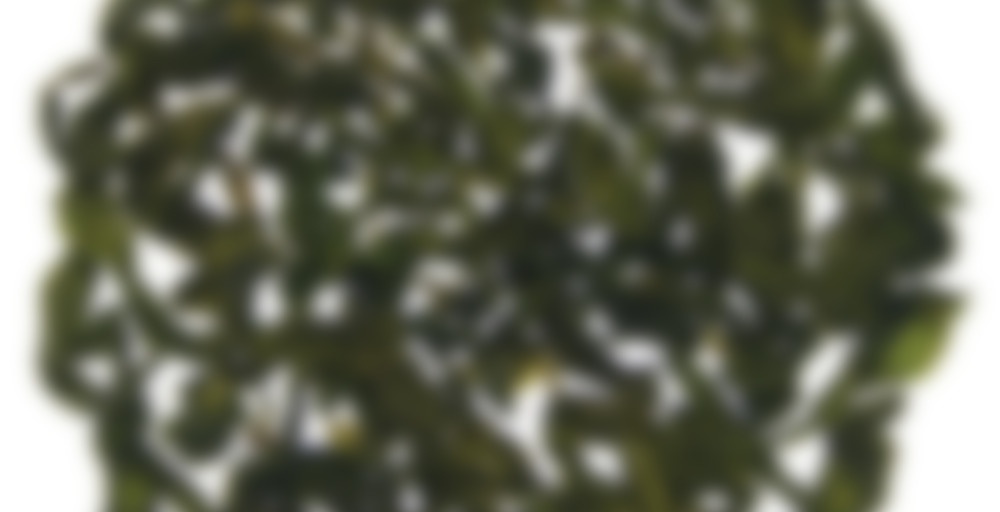 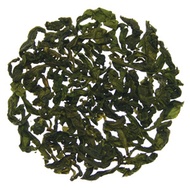 I gave this a second try this morning. (Thanks again Auggy for the generous sample!) Relaxing next to Sencha (my dog) while she is recovering from her surgery has turned out to be incredibly enjoyable! I just hope that she gets better soon. I hate seeing her in pain. I am sure she is enjoying the extra attention, and I hope that will add to an extra speedy recovery!

Once again, this tea smells amazing. Creamy and delightful. It makes you almost expect to get a creamy cup of coconut cream resulting from the infusion. Sadly, the liqour doesn’t live up to the promise of the scent of the dry leaves.

Today, I was mindlessly sipping the tea while reading and all of the sudden I felt like I was drinking coconut water! Then I realized, that while it isn’t a creamy smooth delight, it manages to taste exactly like coconut water! Coconut water is more watery than creamy and has a hint of vegetable to it. This tastes exactly like that!

So while I didn’t get the creamy goodness I was expecting, today I am delighted to be drinking a tea that makes me keep thinking I am actually drinking hot coconut water.

I actually like it a bit better now that I have come to this nifty realization! : ) Uping the rating a tiny bit.

Sending Love to Sencha! LOL you know that happens to me often with some teas. I expect one thing, am not pleased when it does not live up then later realize hey this isn’t bad if I compare it to such and such, :)

Om nom nom
I usually go for hearty blacks with milk in the morning, but just didn’t want the milk today. So, what will give me the same heft and sweetness, without any additives? A coconut oolong, obviously! Fortunately I’ve been keeping Rishi’s in the drawer at work. I’m just waiting for one of my coworkers to ask to try it, because the coconut smell is wafting all over the office now.
Since I haven’t mentioned lately, I don’t usually like coconut. I don’t like it in cakes, or cookies, or the flavoring in candy. But this coconut flavor is fresh and sweet, and lets the tea shine through as well for this rich, smooth, floral experience

finishing off my sample of this tea. Not a bad tea, the coconut flavor in it is really nice. Yum.

This is a very lovely Oolong. The coconut rests in the background – it is not overly pronounced, but the Oolong tastes so lovely, that the coconut doesn’t need to be stronger. I think it’s a really nicely balanced set of flavors. Smooth, rich, and delicious.

Thank you to TeaEqualsBliss for sending me a bit of this tea!

Yay for coconut! I luf coconut. And I luf pouchong. So when I saw this tea, I knew I had to try it. I actually got this from the Spice & Tea Exchange in the Stockyards when my SIL and her boy were visiting but, after doing some digging, figured out that they source their teas from Rishi. So I’m putting it here.

The taste is more in line with the smell of the dry leaf, which is good. It’s a little thin feeling which makes me feel like the flavor is too mild, but it really isn’t. But at the same time, there is something… sad about the flavor. Perhaps it is at the beginning of the swallow (vs. just when I’m holding the tea in my mouth): where I want pouchong thick, rich happiness, I get… water. Almost metallic water? Then there is a nice coconut-ish musky aftertaste that I enjoy but my brain keeps saying, “But the water/metal taste at the end of the sip is sad! Yummy coconut aftertaste can’t make up for metal-sip!”

As the tea cools, I’m getting more pouchong taste (and I wish my Mac would stop autocorrecting pouchong to pouching) with an undercurrent of mild, unsweetened coconut. Honestly, I’m liking that more than when the tea was warmer, but I still am getting a weird little dull metallic note when I swallow. It’s distracting.

I want to like this, I really do. But that taste that pops up when I swallow just makes me sad. This tea makes me sad. Sad Auggy. :(

The second steep (3:30) is better. Or at least not as sad. The metallic sharpness has moved to a flash right at the end of the swallow (instead of the beginning, which was more distracting) and is much quieter. However the coconut flavor is quieter, too, and the pouchong tastes boiled/wilted. So the tea no longer makes me sad but it’s not all that great.

Sigh. At least the leaf smells awesome. (And go me, back into Steepster for the second day and already I’m bucking the trends since it seems everyone else adores this tea… Maybe when straight from Rishi this tea is happier? Let’s blame the Spice and Tea Exchange, okay?)

The first thing I noticed when I went to drink this tea were the directions on the side of the sample package I had. They said to empty the contents of the package into eight ounces of water and steep for three to four minutes. I have to raise issue with this as there is enough leaf in the sample package to satisfy an eight cup teapot at three to four minute steepings. That being said, I chose to not follow the directions and instead used about half a teaspoon of leaf in my small gaiwan (six ounces or so).

Boil water, rinse the leaves, steep for thirty seconds, pour into the fairness cup, serve. Repeat. I was pleasantly surprised by this tea. Based on past experiences with coconut flavoured teas, including other companies’ coconut oolongs, I did not have high expectations. In general, it seems that most companies take a mediocre oolong or black tea and douse it in artificial coconut flavouring. This one, on the other hand, got it right. The initial taste is of oolong. Plain and simple. But then the flavour of coconut kicks in, and it does not taste fake! Rather, it tastes a bit like coconut oil, and provides and delightfully sweet aftertaste.

I enjoyed this tea very much. On my personal enjoyment scale, I give it an 85/100 and would definitely recommend it to lovers of coconut flavoured tea.

Yummy! This is a really good oolong with just a hint of coconut. It almost reminds me of coconut oil. Not that super sweet candy-like flavor we are used to but a nice lingering sweetness.

Have you tried Adagio’s or Golden Moon’s Coconut Pouchong? Was wondering how this stacks up against those?

I’ve tried Adagio’s at a local restuarant and I’d say it is just slightly better. They are both quite yummy :)

Rich coconut aroma rises from the pot as soon as the water hits the tea. I can smell it from several feet away. Not so overpowering in the cup, but still smells strongly of baked coconut (like a macaroon?). The flavor is also dominated by the coconut; I can hardly taste the tea. Finish similar: all coconut, very long.

I’m not sure how to rate this tea. I love coconut, and it tastes yummy, but it seems just over the top in terms of the coconut dominating the tea. It could just as easily be “coconut white” or “coconut green”. I decided that I should give it a good rating since I claim to rate purely on how much I enjoyed the tea, and I did enjoy it. It is also something I might buy, though I think I would drink it infrequently. Perhaps I should just remove enough from the travelling tea box for a few more cups.

As the tea cools toward room temperature, the oolong begins to peek out from behind the coconut. Still good.

Very nice. Nutty, a bit roasty, with a hint of vanilla. Mild coconut flavor that tastes natural and lets the tea shine through.
(at Bubbling Well Tea & Tonic bar, Wisnton-Salem 6-1-12)

This makes an excellent iced tea – the subtle flavors come through very nicely.