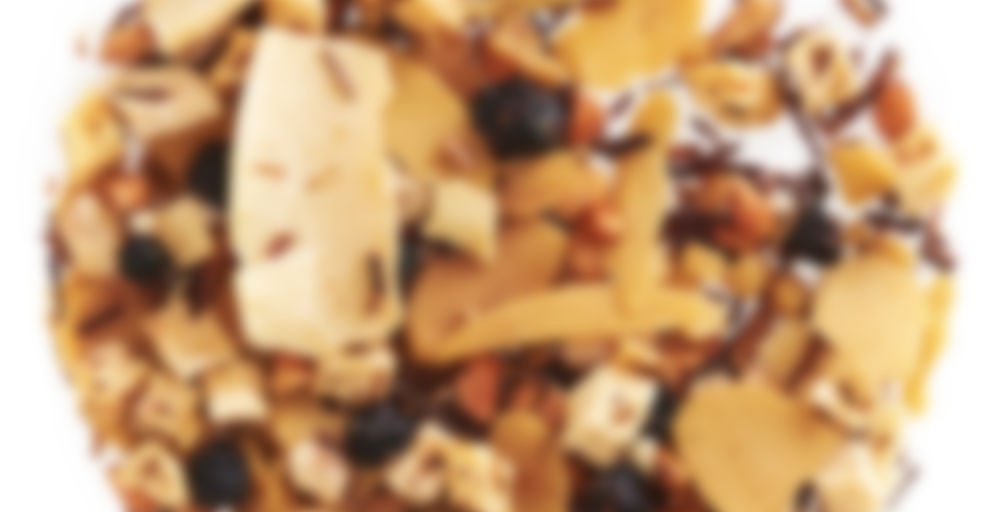 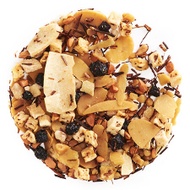 Shake if off with this iced latte-ready rooibos. Laced with nutrient-packed hemp seeds, sweet coconut and a big juicy splash of blueberry, it’s the most refreshing (not to mention delicious) way to stay cool. Try it on ice with a splash of milk for a creamy, caffeine-free iced latte that’ll leave you totally shook.

Rich and creamy, with a juicy splash of blueberry sweetness

What makes it great:
This breakfast-inspired rooibos was born to be sipped as an iced latte.

Made with delicious feel-good ingredients like nutrient-dense hemp and antioxidant-rich blueberries.

This was not in my steepster cupped so the number doesn’t change but I finished it as an iced latte.

This is very sweet. To me, it tastes like blueberry cereal milk. Fake blueberry though which is candy-like and sweet. It’s good but not something I need stocked.

I haven’t liked most other blueberry DT blends, so I didn’t have high expectations for this one. I made it before work with the intention of putting it in the fridge to drink when I got home. Instead, the scent was so amazing that I took two teas to work that day. It tastes like a blueberry cake. It’s so sweet and bakey. It’s really, super good. And I cold brewed the leftover leaves for 24 hours, and they made a delicious resteep as well.

This is what I’d been waiting for all day! The last of my new teas from the Black Friday sale arrived, along with some glitter and gold tea tins to store everything in!

I have had some really awful luck with rooibos blends in the past, but I just had to try this. If you read my first tasting note about Honey Drop from DavidsTEA you’ll know how much I love and miss my grandmother, who died a few years ago but was a GIGANTIC part of my life. Well this tea is linked to another powerful memory for me. Whenever I did exceptionally well in school or she wanted to give me a truly special reward, she would buy me the biggest blueberry muffins I had ever seen, from a local bakery near her house. Thus, blueberry muffins are linked to some of my most special childhood memories.

The second I opened this tea (I bought 4 oz), the smell transported me back to those fresh baked muffins. I was concerned that the white chocolate might be too artificial against the rooibos base, as the blueberries were already extremely sweet, but I needn’t have worried.

Given the description of the blend on the DavidsTEA website, I felt this tea was just begging to be made as an iced latte. So I prepared the tea according to package directions (8 oz per a single Perfect Spoon), a little bit stronger than I typically brew tea. The resulting tea smelled heavenly, warm and sweet without any artificialness to the scent. I decanted the tea into a cold metal bottle I had waiting, added 4 oz of cold skim milk, and stirred gently.

OH MY GOODNESS… this latte is like heaven. The sugary fresh baked blueberry muffin taste is spot on, the skim milk accenting the vanilla and cream notes and adding a silky light mouthfeel that’s refreshingly cool. Will be trying the tea straight tonight, as a before bed cup, and will add another tasting note tomorrow.

A wonderful tea, well balanced and delicious. What wonderful memories it brings back as well!

I wanted this to be super creamy, thick, sweet, maybe some ice cream and sugar notes. I do taste blueberry, but it takes more like apple and coconut than cream in the base. Also there is a fairly noticeable rooibos flavour that doesn’t make me think of a dessert. If this was called blueberry granola I would be more accepting of the flavour combination, but there is nothing that makes me think smoothie or milkshake.

Like most of David’s Tea that I’ve tried. I have to do a pre-rinse because it is just too sweet (stevia) for me. I think most people won’t find it too sweet at all but I prefer teas with no sweetener. I like it much better with a splash of heavy whipping cream. Once I get rid of the extra sweetness, it’s yummy. It has a delicious baked berry flavor, very dessert-like.

And here I am adding a whole tablespoon of fake sugar to every tea I drink, including this one. I’m a monster!

hehe AJRimmer, well, you’re like my nephew then :D. He’s a monster too! <3

B is for… Blueberry Shake!

I wanted to like this when it came out, but just didn’t. It has almost a chapstick sort of flavour to it, and what I really wanted was creamy blueberry. The blueberry also seems quite muted here, which is disappointing, especially in a tea meant to be made into a latte, where strong flavours are most effective.

It’s not terrible, and I kind of like the nuttiness coming through from the hemp seeds (I assume that’s the source), but glad it’s gone.

New teas – three of them, in fact! It feels like it’s been a hot second since a new tea launch at DT and to be honest I nearly forgot that I needed to get tasting notes up for these ones – in fact, VariaTEA beat me to writing about some of them! Love you VariaTEA, but how often does that happen!? Oops!

The collection is iced latte themed, so that’s what I’m going to focus on for these reviews but I think it’s worth noting that I’ve tried all of these teas not just as iced lattes, but just iced, hot, and as hot lattes. It’s a collection I’ve been waiting to talk about for a while; I think it’s super cool and I love the nostalgic kinda vibe! In fact, here’s a fun bit of knowledge – this is the VERY FIRST unreleased tea that I tried when I started working at head office; so this will probably always be a super meaningful one for me and I imagine it holding a nostalgic place in my heart years into the future – the same way Birthday Cake does. Back then, the tea didn’t even have an official name; it was just a blueberry tea that I really, really loved!

I mean, I was obsessed with it – both because it was new and unreleased and I felt like I was part of a huge secret club (which, I guess, I am?) but also just because I adored the flavour. I don’t know if DT has ever released a blueberry flavoured blend that I disliked, though – I love when we tackle blueberry. Just adore it! So – what does the tea taste like!? Well, it’s sweet – definitely sweet. However, more a very dense, rich blueberry with a lot of creaminess and coconut kind of sweet – it reminded me a little bit when I first tried it of blueberries and condensed milk, in a very nice way. I think the coconut is a nice touch; I love the blueberry and coconut pairing; they bring out really nice qualities in one another. The rooibos is present, for sure – it’s kind of woody, mostly has a honey and very milk nuttiness to it. Not super strong; but I think distinct enough that those who really dislike rooibos will pick it out.

It was very cool getting to see the tea officially be named, since I was introduced to it because it was named and had already formed an opinion on it. So, do I think it tastes like a blueberry shake? Yeah, I think it’s pretty fitting! It’s sweet, very decadent, creamy! I think the one thing that doesn’t work for me, milkshake wise, is that sort of sweet nuttiness to the taste (from the almond and brittle pieces, and slightly the rooibos) but I suppose if you think of it as a breakfast shake then that makes a bit more sense?

I just know it’s good – awesome as an iced latte, also really good hot and as a hot latte!

One side bar that I wanted to talk about – there’s a gluten allergy warning on this tea! You can look at my Pitaya Power tasting note if you want to understand some of my feelings on that, but I just wanted to kind of note where that’s coming from: it’s because the hemp seeds in the blend are processed in a facility that also processes gluten. So it’s there because of the possibility of gluten trace, but none of the ingredients themselves have gluten. So that’s the explanation for that – not gonna talk about how I feel about gluten inclusion again; just look at Pitaya Power if you wanna know about that…

So yeah! Iced latte collection!! This is my favourite from the collection, for sure. Happy to get to talk about it!!

Gah… You make me want to do an order with them. I’ve been really really really good about ordering new tea the past few months too, but a latte when it’s hot sounds so good.