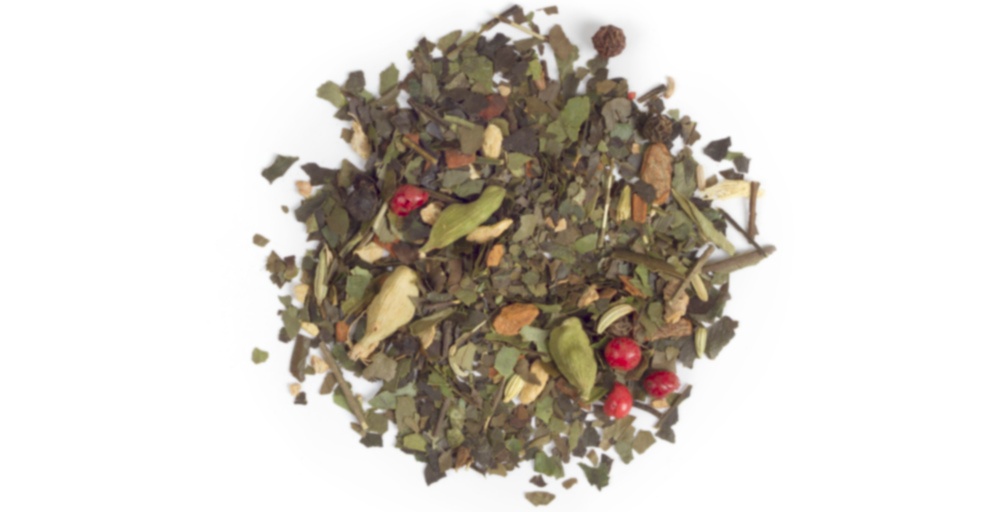 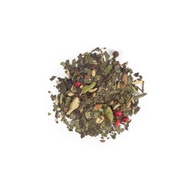 A warm welcome
This exotic, energizing chai uses guayusa from the Amazonia region of Ecuador, spiced up with cinnamon, ginger, peppercorns and spices. Guayusa is a big part of daily life in Ecuador. Every day, indigenous families wake up at 3am to sit around the fire, sipping guayusa from gourds until the sun comes up and chatting about everything from hunting techniques to ancestral myths. You don’t have to get up that early to enjoy it, but trust us – this spicy chai is sure to wake you up and warm the soul.

Had my dad sample this tea while he’s visiting from Canada.

During the week he was here, I introduced him to various teas – he occasional hits DavidsTea in the mall for free samples (lol) but doesn’t buy much. He does drink bagged earl greys.

Throughout this week, it was looking like he really likes spicy – which is ultra weird because he has stomach issues with spicy food. Spicy to him is too much oregano in the pasta sauce.

This morning I gave him a cup of this tea (that I have yet to do a official tasting) and he LOVED it! Said it was the best tea he ever had (and we had everything from 52 teas, Fusion Tea, The Persimmon Tree and Butiki) Lucky for him, it’s a DT tea so he can buy it at home.

Looks like he’s gonna buy a Steeper when he gets home now too because he likes mine.

I have a friend like that to! Apparently it doesn’t bug her when a tea is spicy, just food?!

I got this in a swap with Reasoned_Melody. There’s a longer story behind how I got this tea, but let’s just say they finally came. Yay!!!

I was dragging a bit this morning and I thought this guayasa blend would be good to blend up. I’ve never seen a chai version before. I checked the ingredients and saw there was stevia, so I proceeded cautiously, since other blends in the past I haven’t gotten along with.

I brewed this up and since I’m off to a festival with the family, I put it in my Celestial Seasonings mug (so cute – it has all the CS characters on it). The flavor isn’t bad. There’s definitely chai spices, guayusa flavor, and unfortunately my arch nemesis stevia. It’s not as bad as DT’s cherry cola, but it’s there a little bit. The good news is that it’s masked somewhat by the spices. I still feel though that I could have done without the stevia in the blend. I guess they thought that since guayusa is new, stevia will help ease the transition.

Overall an interesting blend, although I’m still not a fan of stevia.

Guayusa and chai? Sounds like a good combo. I’d really rather have some of Butiki’s Good Morning Sunshine right now, though…

The aroma of this one is definitely chai-like, but smells like it’s missing something. I suspect that “missing” ingredient is a strong base tea; I managed to enjoy 52teas’ Melange Rooibos without a proper tea base, but I think I dislike the flavour of straight guayusa even more than rooibos… Bleh. Yeah, it’s much more like spiced water that I’m smelling.

Eh… the flavour kind of follows the odd aroma. Strangely enough I’m not getting the classic “guayusa” flavour, just light spices on top of something that’s coming off as creamy and pleasant. An creamy aftertaste that actually reminds me of GMS, but without the Meyer lemon. I wonder now whether that’s a flavouring aspect, or part of the guayusa itself… interesting.

Anyhow, although I’m not disliking this one nearly as much as I thought, it still isn’t likely to be a tea I pick up again. The spicing also isn’t strong enough to make me think that it would make a good latté (all chais should make good lattés!)

Oh well! Another tea down (not a sipdown though, still a couple more cups before that happens!)

Flavour: Mild, but warm and spicy with pepper and ginger notes, and a hint of cinnamon. There is an underlying herbal quality which comes from the guayusa

Ooh, can’t wait for this one! I was just thinking the other day that I’d love to see more guayusa blends from DT.

Oooh cinnamon scent – in a good way.
Taste-wise, this is a really nice savory type tea. And black pepper! I’m in love. Black pepper flavors in wine are what I especially seek out. In a tea? Perfect. And the cinnamon which was close to too much in the scent is just the smallest note of heat in the flavor. I avoided this tea for a while, afraid of the spices – I’m sorry I waited so long now. This is a great mid-morning tea,
This is super balanced, energizing and relaxing at the same time.

I have a feeling that what is supposed to be the main star of this tea is what is going to make me not buy it again. I really enjoyed the spice mix of the chai, cinnamon is always a winner with me (my favourite chai tea is the Cinnamon Rooibos Chai at David’s), but it couldn’t compensate for the other ingredients. At first I thought what bothered me was the stevia, since the tea had that fake sweetness to it that tends to turn my stomach. Imagine my surprise when I tried the straight guayusa and found out that was part of the problem here. Sadly guayusa isn’t for me, so neither is this chai. On the bright side it has made me fall in love with mate after re-visiting them.

I happened to be in the area of a DAVIDs today with some time to blow, which I qualify as a very happy coincidence. Had read about this one in the newsletter and I was excited to try it. I always need an energy boost so I gave it a shot.
Anyway, it was quite tasty. I can’t really describe the flavour of the Guayusa, its somewhat similar to a green mate… But the chai was good! A nice blend of spices that wasn’t too spicy, and the guayusa complemented it well.
And, what i was really looking for, the beloved energy boost, did happen!
I was told be the store girl to let it brew for a quite a while and so I did. The resulting colour was almost black, but the flavour was great!

Well this is interesting. Earlier I had a chai that was mostly a good base lacking spices, now I have spices lacking a base. I think Chai Amazonia and Pure Chai were meant to be blended together. I will have to try that later.

First time trying guayusa, also first time trying a tea with stevia in it. I added milk but no sweeteners, figuring the stevia would sweeten the tea and it did. Though I think a little honey would have helped make the tea thicker, it is rather thin. I think it’s mental after seeing how green and herbal the tea is, but I keep tasting hints of mint. I do not think there is any mint in this tea.

I had no idea what guayusa was before trying this tea, and I wish I would have remained ignorant. The dry leaves smell amazing, sweet and spicy. But the brewed tea honestly smells horrible to me. Vegetal and bitter and, frankly, a bit like B.O. And it tastes exactly like it smells. I taste a bit of sweetness trying to come through, but the guayusa is too overpowering for me. Luckily this was only a sample included in my order and I didn’t pay for a whole pack of it. Not a fan.

This tea has almost every spice imaginable: cinnamon, ginger, cardamom, fennel, black pepper, and pink peppercorns; and they all blend together perfectly creating a beautiful, clean and smooth tea. The Guayusa maté tea leaves are a fantastic base because it has a mild and fresh taste that helps bring out the lovely spices.

If you like those ^ kinds of spices, then I can guarantee you will love this lovely tea. Enjoy :)