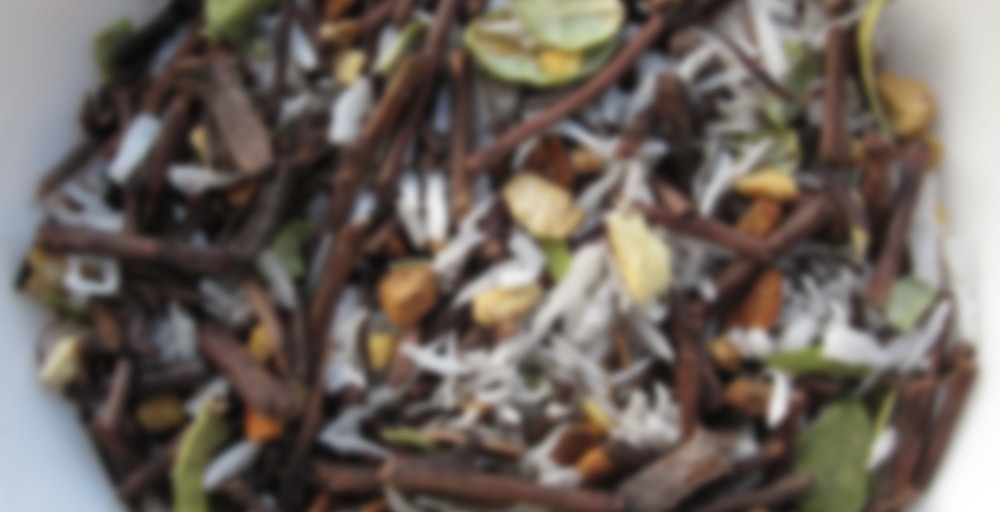 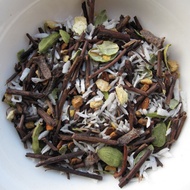 by Yogic Chai
88
You

Herbal Properties:
- Kukicha Tea: Popular among the macrobiotic community. Kukicha is a powerful antioxidant* and is very low in caffeine, in fact the lowest in caffeine of all traditional teas.

- Coconut: Coconut, says vaidya Mishra, Director of Maharishi Ayurveda’s Product Research and Development, is considered a divine plant in vedic tradition. Whenever you perform a sacred ceremony like a yagna, havan or puja, a coconut must grace the occasion.

This one REALLY surprised me! For one…I never would have thought of flavoring kukicha with these chai ingredients but now that it has been done I am glad it was!

The Cardamom and Cinnamon are NOT overly strong at all…they are wonderful on the assist! As are the Ginger and Clove. The primary flavors are the Kukicha and Coconut which are bold and sassy! I love that about this blend!

As for the aroma it’s a coconut-twig-toasty-nutty-slightly coffee bean-esque type aroma that I have never sniffed before! Very creative/unique and a daring/bold move! And a successful one, I might add!! This exceeded my expectations and was a wondrous surprise!

Sounds like the tea to cure my recent chai embargo. I haven’t been very chai friendly lately for the same reason but add in the magic of kukicha and coconut? Gah, you’re making my shopping list quintuple! XD

wow sounds great! I’m a big fan of kukicha, so I have to try this.

I ordered this one in the end of the year sale and can’t wait to try it..

This sounds great! I’m putting it on my shopping list. :)

Finishing off the last that I have of this tea. So yummy!

Erm, I’m horrible. I forget who sent this to me… I’m sorry! This tea is so delicious! The spices are well balanced and not too much fennel or anise or any of that licorice flavor. Bleh. The roastiness sort of gave this a caramel-like flavor. I need more of this. Better than rooibos or black base. There should be more kukicha blends out there.

Agreed! This is one of my favourites.

I am addicted to this blend and have had it for the past 5 nights in a row. I was concerned prior to ordering that since this was an “authentic” chai, the cardamom would be overpowering. This is not the case. All of the spices blend well and perfectly. As an extra plus, the coconut provides a natural sweetness. This is a tie w/Liberteas Masterpiece Chai.

Wanted something dessert-like last night, so I made this amazing chai. Yogic really does it right!! I’m still craving it right now :)

This is so very good. I seem to want it every day, even today despite the warm weather, and am really wishing I got more. I must drink a lot more tea before allowing myself to buy any more, but I’m going to be upset to run out of this creamy, sweet, spicy, kukicha goodness.

I made this chai instead of 52tea’s chocolate chai – enjoyed it a lot more! But then I realized I forgot to put sugar into the other. Oops!