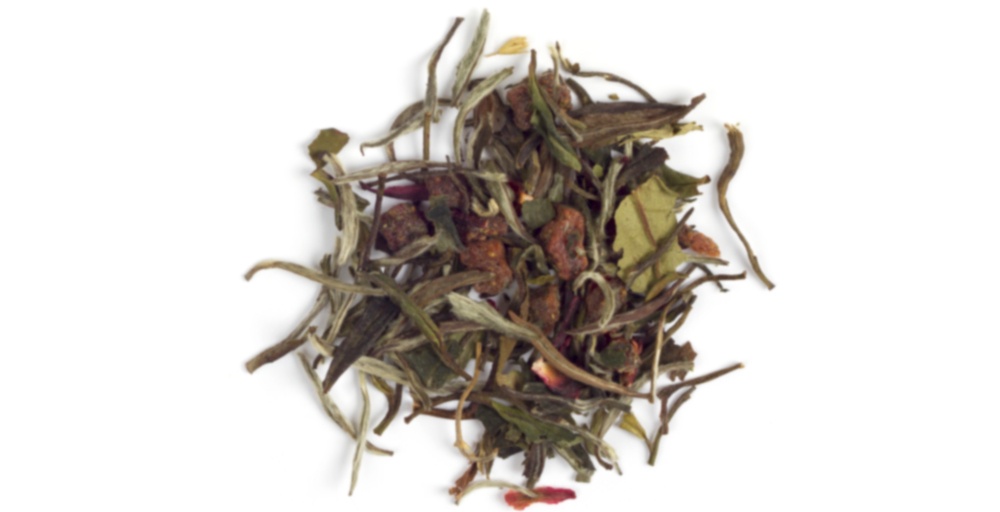 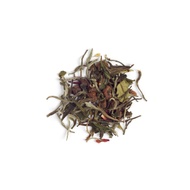 A sweet offering
There are hundreds of reasons to love strawberries, but our favourite comes from Bavaria. Every spring, they tie small baskets of strawberries to the horns of their cattle to attract berry-loving elves. Legend has it, with the elves on your side you’re sure to have an abundant year. So when you enjoy a pot of this sweet, berry-laced tea, try leaving a cup on your doorstep. You never know what your neighbourhood elves will leave in return.

What the fuck is up with DT lately? I could be wrong or overreacting, but it seems like they keep pulling their white blends and discontinuing them! I know they’ve now discontinued Checkmate (thankfully I have a sample of it still I can try), and their Jasmine Silver Needles, and now this one isn’t listed on the site any more either. I seriously hope this one isn’t going away because I really enjoy it and their white tea selection is becoming increasingly small. Boo.

Step your shit up DT: I mean, half if not more of the white blends still listed on the site aren’t even straight up white blends – they’re white/greens.

Anyway, I cold brewed this for a total of 19 hours. I’ve been a little sloppy with my most recent cold brews since they’ve been left for a long period of time. In fact, the one currently in the fridge that I’ve yet to strain has been there for over 24 hours. Oops.

This was really good though; very strawberry in a more tangy and natural/realistic way. My observation with this tea thus far that depending on how and how long it’s steeped it really has two very distinct flavours which are this way which is like tangy and sweet actual strawberries and then the other which is more like strawberry gummy candy.

How long do you normally cold brew your white teas?

Usually under 10 hours; seven seems to be about average. I forgot I was cold brewing this one, though.

I didn’t know checkmate was discontinued :(
I agree with you about stepping up their game in the whites though!

I tend to forget about my cold brews as well. oops. I need to start putting reminders on my fridge!

I shared this with my coworker today and she loved it! yay! Then she told me she doesn’t hate any tea, except pumpkin flavoured. I can work with that. Let the tea tasting begin!

We both enjoyed it with no additions, and it was very smooth, subtly sweet and tasted exactly like fresh wild strawberries. The hibiscus turned the liquor the perfect shade of pink and added an extremely mild tartness. Gentle and soothing.

Glad to hear that the hibiscus is mild. I’m really nervous to try this one, because I desperately want to love it now that Strawberry Fields is discontinued from Teaopia.

Couldn’t hurt to pick up 10g! The hibiscus is definitely mild, but the whole flavour of this tea is kind of mild as a whole as well – it works though I think!

I have a bit I haven’t tried yet either. I’m so terrible with trying new purchases, because I have so many teas from swaps to try too…

And again, back to my old faithful. After the disappointment that was Chili Chai, I figured I should go for something a little more reliable in my world. I do love this tea, I can not believe how often I reach for it. I think it might be the perfect strawberry tea for me!

You do! It is such a sweet strawberry flavour, all on its own!! I love it!

haha. mewakeling, you and your sweet strawberry :)

I decided to move into whites for the evening (and by evening I mean 10 at night) to cut down on my caffeine. I decided to go with this one because Lovelylotus sent me so much and I am trying to work through it. I also had the thought to add just a smidge of the Honeybush Mango MissB sent me, as I have a lot of that as well and thought the two would make an interesting flavor combination.

So how does my concoction actually taste? Weird. There is strawberry, there is mango, there is sweetness, but each component seems to be in conflict with the others as opposed to being harmoniously intermingled. Oh well, it was worth a try. Thank you both Lovelylous and MissB for so generously sharing your tea stashes with me!

I cold brewed this for 5-6 hours. I thought this was really good, maybe a little bit tart, but that was ok.

Nice and light strawberry taste with a delicate white background. The strawberry was maybe a little too light. I can see how this might become overly tart from the hibiscus if not brewed properly.

Not sure if I would buy this again, just because I have so many other whites that I enjoy so much better.

I want my old strawberry white tea from DT back! pouts
This wasn’t terrible. When hot, it was great. like fresh berries, all tart and sweet at once. However… as it cooled, the tea got super thick and weird. It became more syrupy, and lost the intense berry note. Certainly not worth keeping in my cupboard.
I guess if I can gulp it down before the tea gets to cold… it’d get an 88 but that won’t happen so boo! bah. I still miss the old version. Oh well. Sweet memories… one of my many gateway teas!

omg for the longest time it wasn’t… but I just checked and now it is! oh man, I can’t afford it this week. MUST save up. and fast! thanks for the tip Kittenna you rock!!!

Upping the rating some because it is better hot, made by moi at home. I still say it is a very mild tea, and I liked Teaopia’s better, but this one is less bad than before.

I’m finishing this one off today. I used more leaf than I did last time, and that seems to have helped to improve with the flavors having more of a presence. The scent still reminds me of strawberries that are past their prime, but the taste as a hot tea is a bit better than the last time I made this. Unfortunately, as it cools, the overripe taste becomes increasingly prominent.

Meh…it doesn’t impress me enough to merit a repurchase.

Unsurprisingly, this is much like Strawberry White. Definitely sweeter and more jam-like though, and along with the tasty white tea flavour I’m almost getting an odd smokiness. Not unpleasant, but quite unexpected! Not really sure where it’s coming from. This is good, though. I’m not sure whether I like the old or new version better; may have to give it a try later today, after I’ve slept…

I think depending on my mood, I could go for either. For a strawberry white, I think the original really does it best, but for a desserty sort of treat, this one’s better. I think I’d prefer to avoid the stevia if I can, though (and since I have a whole tin of the old one…!)

I have a confession to make… I went a little bit bonkers in my DAVIDsTEA today and bought the Steeper, leak-proof kids cup (for my accident-prone self), and four of the new teas. FOUR! It’s a problem.

This tea was first on my list to try ever since learning that my beloved Strawberry White was no longer going to be carried in-stores. I know, I know, why not just order some online? Well, I’d have to use my man’s credit card since mine is expired and that means he’d get to dictate what I’d spend. Psh… no thanks! I’ll just go into the store and buy a little bit here and there. >_<

On to the tea! When I asked the sales-girl if this was the reblended Strawberry White she told me it was indeed because they wanted a stronger strawberry flavour. It looks nothing like it’s precursor and yet smells basically the same, maybe the tiniest bit more strawberry-ish. I erred on the side of caution when brewing this, ever since discovering that white teas taste so much better when brewed short + not-boiling. Taste-wise, it tastes slightly sweeter than Strawberry White, probably due to the stevia, but I’m also noticing that I now feel dizzy and I’m only a couple sips into the cup. Great. Is stevia the culprit in my not tolerating certain teas (Love Elixir for Her I’m lookin’ at you!)?

Other than that… to me it tastes the same, but I’ll hold off rating until I know for sure whether it’s the stevia making my head spin…

Yeah, I’m discovering that I don’t either…