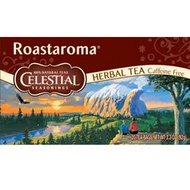 by Celestial Seasonings
66
You

With the robust flavors of roasted chicory and barley, a hint of chocolate from roasted carob and just a touch of cinnamon and allspice, Roastaroma is hearty enough to give you a lift in the morning and delicious enough to enjoy all day long.” — Charlie Baden, Celestial Seasonings Blendmaster Since 1975

Not tea. Not coffee. Not chocolate. Not bad!

This is very weird stuff, but I like it — maybe more than I expected to. It’s also kind of a historical research project for me, as something similar to this blend was apparently used in the American South when real coffee wasn’t available because of the blockade during the Civil War. Roasted grains + chicory was a common coffee substitute.

It looks like coffee. The half-and-half sank into it the same way it sinks into coffee. It definitely doesn’t taste like coffee. I get the carob a bit. Can’t find the star anise or allspice or even the cinnamon. I was thinking the cinnamon would be quite strong.

Dude, this is one weird tea. I didn’t go into it expecting coffee. which is good, since I don’t think it tastes anything like coffee (unless you only drink chicory coffee.) I think that I like barley tea, which is itself a bit of an acquired taste, and I remember my Mom drinking this once upon a time.

I got worried when I opened the box and took a sniff. It smells of barley and chicory, which I expected, but I also sensed my one spice nemesis in there – star anise! I don’t know why I dislike it so much, but I do. Still, it was much in the background, and I tolerate some anise heavy teas, so I brewed up a cup. The smell of the tea was, I’m not going to lie, a little off-putting. I can’t explain it, it’s just funky. I like carob, barley, and even chicory well enough on their own, but mixed together with spice it’s all a bit much.

I took a sip. Then I added milk and sugar and took another. It was better, but it was still strange. The problem, I think, is that while the taste isn’t awful, the smell is bad to me, and I can’t avoid it if I’m drinking tea! I think that if it were just the grains it would be fine, but the spices shouldn’t be lurking. The anise came out as it cooled, and the tea gave a coated feeling to my mouth and throat. I tried to finish the cup, but I ended up leaving the dregs. My cat was begging for a smell (he always wants to sniff at what I’m eating or drinking, and I let him after I’m done, as he doesn’t want to eat people food, he just loves smells.) He bristled his tail and ran away. Smart cat. The smell of the teabag was threatening to make me feel ill so I threw it away. And then ate chocolate to get the taste out of my mouth. You see what you are doing to me, Celestial Seasonings? It looked all innocent in the box, and led to chocolate (wait, that part’s not so bad!) But I think I’ll skip the funky tea and go straight to the dark chocolate next time.

Experimented with this today. Was wondering if I combined this with almond syrup, if I could replicate the old Celestial Seasonings Almond Sunset with milk and sugar that I used to drink as a kid with my mom in the afternoons. The answer is YES! Tastes just like it. I used Fabbri brand syrup.

Now that I’m into real tea, I don’t think I’ll crave this too often, but it’s a nice non-caffeinated dessert drink. The Roastaroma on its own is an interesting, malty beverage with lots of body and no astringency or bitterness.

With apologies to those of you who are farther north and even colder than I am, this kind of weather makes me tired, tense, and anxious. So the last thing I needed, even after stepping out in -22F wind chill to start and run my car for a bit and take a turn at snow sweeping, was a heavy hit of caffeine. But the thing I needed most was something with meat on its bones to warm me up.

This is a good compromise. While it would never fool anyone into thinking it’s coffee, the chicory is dark and just a little sweet; the cinnamon and spice is enough to warm you up and recharge your draining batteries.

I love this one so much

I love your notes, g. You know how to take care of yourself with tea.

None of our cats are in a cuddling mood this afternoon. Roastaroma is as close as I could get to a purring hot pad.

Something about the snow has my cat a ball of frisk today!

When I bought this condo I was told our monthly HOA went into them providing snow removal. I have yet to see this in action. After trying to clear a walking path in 6"+ packed snow with a house broom to get to the grocery store, I finally bought my own shovel, convinced this “paid snow removal” service is a unicorn. Harumph.

Rogue rural redneck here…I’ve never thought very highly of HOA’s, but as hubby and I get older, yard service does sound more and more appealing.

As to the cats…ours have mighty, mighty cabin fever. The kitchen floor is a muddle of pawprints from one-minute “let meow-t, no let me in!” runs and the living room has lost the Battle of the Catnip Mice.

I bought this tea out of curiosity. It would be unfair to compare it to coffee since it tastes nothing remotely like coffee. Comparing it to other teas, it is a very dark, roasty, chocolately flavor with subtle spiciness. I find it a little strong to drink by itself so I add some milk and honey to it.

I think I like it only out of nostalgia

Just a thought: you might like it better if you didn’t steep it so long. It tends to get bitter after a while.

I really wish they sold this one in grocery stores… but alas. I’ve been meaning to try it for a long time now, and since I’m on a bit of a “coffee alternative” kick with yaupon and mate in the mornings and caffeine-free herbal alternatives like dandelion and chicory in the afternoons, I finally gritted my teeth and paid the $6 Amazon wants for a single box of it. My grocery store sells other CS blends for like $2 or $3 a box. T-T
The dry teabag smelled very strongly of cinnamon and not much else. However, the SECOND the hot water hit it, the liquor released a very strong roasted barley scent, in addition to the cinnamon. The scent was very faintly reminiscent of coffee, but it really reminds me more of Cinnamon Toast Crunch cereal, minus the sugary component.
Once I sipped, I tasted the anise, barley, chicory, and cinnamon. Didn’t get much in the way of carob or allspice.
Overall, this tea tastes like biscotti. I see what CS was going for here, and it’s a very pleasant, warming, roast-y cuppa, but it doesn’t taste like coffee and doesn’t satisfy the 2:00 PM coffee urge the way that Teeccino’s Dandelion Dark Roast does.
Still, I’m not mad at it. I’ll definitely enjoy the rest of the box and maybe even consider re-stocking it, if I can continue to get it online.

Doggone it, I have GOT to get to the store! :) Another one of my CS favorites that I have neglected for snootier things.

LOL! We can always count on good ol’ CS when everything else in the world gets crazy.

I was feeling adventurous the last time I ordered from Celestial Seasonings so I ordered a box of this. I don’t like coffee (though I love the smell), or chicory; but I do like roasted barley, carob, cinnamon, nutmeg, and anise so I figured it was worth a shot. This is a very strong tea. It’s in the same flavor category as coffee, dark chocolate, and strong black tea but it is definitely it’s own distinct flavor. I could taste the carob, barley and chicory, while the cinnamon and nutmeg are only an accent on the flavor. I didn’t taste the anise at all, so it’s probably just a tiny amount to take the edge off the bitterness. After a bit of experimentation, I decided that I’m not a huge fan of this plain, but it makes a very nice latte, and it’s especially nice with a teaspoon of cocoa powder added to the mix. When I pick up more brewing cocoa, I’ll have to try blending that. I have seen several varieties of “herbal coffee” that have made me curious. Since I like this one, I’ll have to give some other varieties a try.

I’ve always liked this one but hadn’t considered the cocoa touch! (Now that you mention it, I’ve got some straight-up chicory in my pantry … hmmm…!)

Hope you are okay. Wondering what is going on with the Here’s Hoping teabox?

Not bad. Not bad at all. Definitely reminds me of coffee, but smoother. Love sampling from whole food stores. I would not be sure I’d get some myself, but if I was desperately trying to give up coffee, I’d get this on discount. It also might NOT be beneficial because it would accelerate my coffee cravings.

I had a boyfriend in college who loved this stuff.

Yep, this is a weird one. At first I loved the roasted, warm flavor… but eventually I grew tired of it. It’s a nice change of pace from the teas I usually drink, but I think my exploration into chicory tea is over.