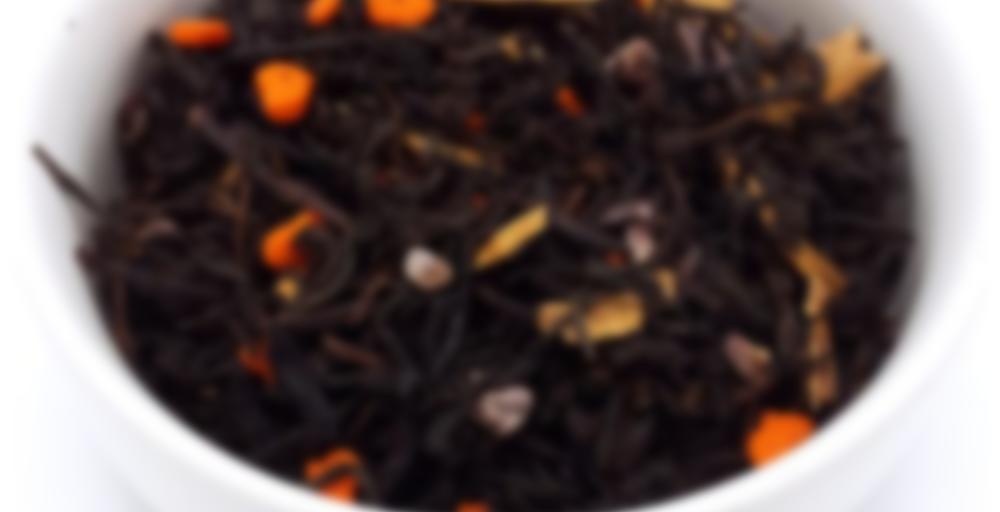 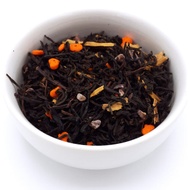 What could possibly be better than having pancakes for breakfast?

Drinking them of course. Ceylon is used as the base and is paired with the flavors of cinnamon-spiced pumpkin pancakes with a hefty drizzle of maple syrup.

I admit, this one is disappointing to me. I expected more pumpkin and more pancake.

This mostly seems like a mild chai. The base tea is very light in flavor, and the majority of the flavor is the spices. There’s a heap of cinnamon, and I feel like I taste clove and anise as well, though they’re not listed in the ingredients. Perhaps there’s added spice flavoring?

The spices here actually remind me of cinnamon-scented potpourri. That sounds worse than I meant it to, it’s just a rather distinct aromatic cinnamon flavor.

It’s a shame, because really the pancake aspect what was excited me most about this tea, and I don’t get maple at all. To me, this is perhaps closer to a crisp cinnamon cookie?

Sipdown!
While looking at the loose leaf I’m noticing that there are a LOT of large cinnamon bark pieces in my sample bag of this. So there should be a lot of spice in this cup.

I did add some maple syrup to this and a tiny bit of almond milk.
This is a nice tea not what I was expecting but I really like the spices in this. I was expecting this to be a really heavy maple tasting tea with some spice. The spice was the main flavor in this though for me. It tastes like what you would want a Pumpkin Chai tea to taste like. I don’t really get pancakes from this as much as pumpkin chai. The base is malty and the milk adds a creaminess to the cup. There’s a slightly sweet spiced pumpkin flavor as well. It’s slightly spicy but the spices are very well balanced. This would definitely be a great Chai to drink during Fall. It reminds me of Bath and Body Work’s pumpkin collection.

I like to add maple syrup to my pumpkin chais too.

It’s the time of year again when I hoard pumpkin spice teas because I NEED them.

That said, this is more ‘Cinnamony Pumpkin Pancakes’ than ‘Syrupy’. There’s huge pieces of cinnamon in the dry mix; I had to break a few to get them to fit into my tea ball. The smell of it, both dry leaf and brewed tea, is also overwhelmingly of cinnamon and other spices. It goes without saying that it tastes mainly of cinnamon when it’s freshly brewed, and just a bit bitter from the Ceylon. When it cools a little the other spice flavors come out a bit more, and just a little bit of pumpkin. If the syrup’s there at all, it’s lost under all the spices. It’s not particularly pancakelike either; it’s really more of a cinnamon-heavy pumpkin chai than anything else.

I took the package’s advice for my second cup and added maple syrup as a sweetener; then I got the maple flavor because I added it myself. So yeah, BYOS if you want the ‘syrupy’ part of this at all.

The ceylon base is on the bright and astringent side, but, wow, that flavouring swamps it the best it can! The syrup oozes into my nostrils and down my throat, while pumpkin spices catch on the tongue.

I don’t necessarily get pancakes, but their is something extremely dessert-like to the finish; it reminds me of cupcakes and fall candles.

This isn’t as high a priority repurchase as other AQ2T teas but it will definitely find its way into my shopping cart come end of summer/early fall.

At least, I think this is a sipdown. It is of one package, anyhow, but it’s possible I have another sample bag of it somewhere. Anyways, this might have been the best cup of this tea I had (maybe some of the better flavouring was at the bottom of the bag?) It’s quite nicely fall-spiced, not too heavy on the cinnamon, and with a nice sweetness, which is presumably the maple syrup. No pancakes that I’m getting, but this tea deserves a small ratings bump for this marvellous cup. As a side note – I just happened to be particularly watchful of infusion times tonight (and last night), and that attentiveness might be the key here. I’m fairly sure this was steeped no longer than 3 minutes, instead of my usual “awww crap I have tea steeping”, so it might actually taste the way it is intended to taste!

Overall – I’d get this again for a fall tea. I think I like it more than most (possibly all) of the DT offerings that are similar, as they usually taste fakey or taste too much like chai (aka too much going on).

Sniffed the bag of this and could smell a little syrup dominated by cinnamon. My cup smells of syrupy cinnamon pancakes for sure. I’m trying to decide if I can pick out any pumpkin or if the tea relies on the pumpkin spices to give the impression of it. It smells very fall potpourri like. The first few sips are all cinnamon which doesn’t seem to want to give way to anything else. A little clove comes in and finally dominates. Adding sweetener makes the syrup pop right up mid sip and into the aftertaste. As I sip on, I can totally pick up on syrupy spiced pancakes, but I’m still not sure if there is actual pumpkin/flavoring in it. Pondering it makes me long for Costco’s pumpkin pie. They do really good gigantic pumpkin pies. I meant to try this with cream, but was enjoying it so much with a little sugar that I absent mindedly made it to the bottom of the cup without cream. I think a resteep may be in order.

Update: Resteep killed by cream. A touch of sweetener alone is enough to bring out the magic in this cup.

I miss A quarter to tea. Finished my last cup of this tonight to try and clear out older teas. Forgot how sweet this one was and overdid it with the sugar but oh well, was in the mood for something sweet

I miss them too! She kept it a little open-ended so I’m hoping at some point she’ll reopen.

That would be nice if they reopen

Sipdown! This was a sample size so that’s not much of an achievement, but still. It’s a bit chilly out due to the wind from Hermine so I wanted a fall-themed tea. This fit the bill and I got to claim a sipdown.

I added rice milk to the first steep for a bit of creaminess. There was lots of maple syrup and pumpkin spice flavor but nothing pancake-like per se. I didn’t really miss it. The base tea is nice and malty and that’s plenty to hang the flavor on. For the second steep, I didn’t make any additions. The maltiness of the base tea came out more, with maple and cinnamon notes at the tail end. Overall, this was a great tea for a fall-like day.

With the addition of maple syrup and milk, this tea makes for lovely dessert tea. They really bring out and enhance the favors. I’m getting syrupy pumpkin bready sweetness. Really good this way!

Maple Syrup and milk go together amazingly well. I’ve never tried to through the spicy in there, could see it though. :)

It’s funny that reading the other reviews, there are a couple comments about the base being really strong on this blend. I found the base to be rather watery tasting. But since this was a secondhand purchase, I don’t know how long the leaf has been sitting in its little baggy.

Other than that, I enjoyed this. The maple is strong, and you can never go wrong with a nice maple flavor. The cinnamon is the next strongest flavor and pairs well with the maple. I suppose I chose to drink this this morning because I wish fall were here, and the maple cinnamon is doing its best to help me pretend. There’s a buttery chocolatey kind of aftertaste too.

Maybe my palate is filling in the likely pairings, but I might taste a bit of clove? It’s nice, whether it’s there or not. The cinnamon sticks and the pumpkin sprinkles were a nice touch to making this blend fun.