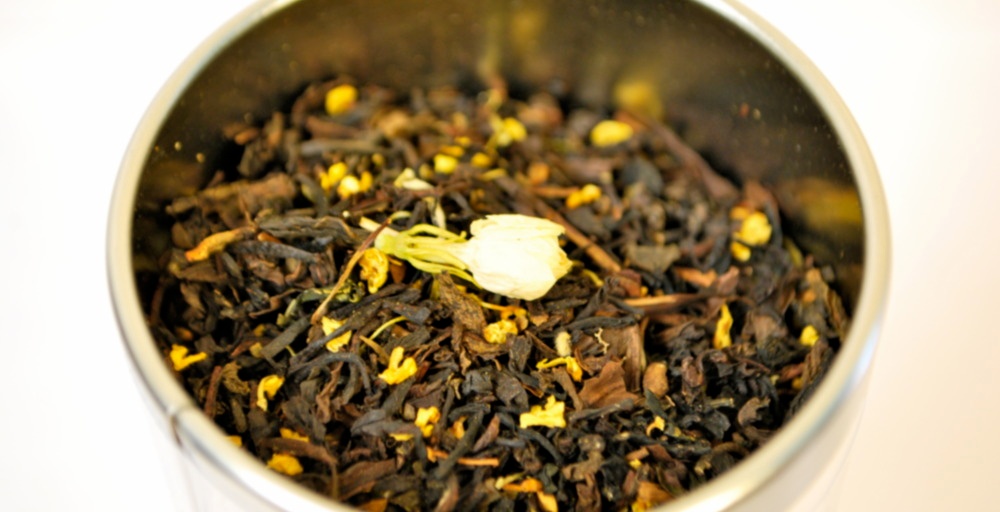 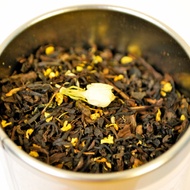 Oolong tea from Taiwan is blended with organic black and green teas, and flower blossoms to produce a blend that is appealing to the eye and palate. Makes a delicious iced tea.

All About Health Store

Here’s Hoping Traveling Teabox – Round #5 – Tea #48
I thought this was the same blend as the Fusion Peach oolong that I had a while ago… and it is! I like this blend. It’s a nice combination with peach but it seems more like a Darjeeling to me than an oolong. The peach is strong but tasty. I love seeing the jasmine, but I’m not sure it offers much to the flavor. A nice one to revisit!

I made this tea as a cold brew and forgot about it for TWO days. Hey, it was still good. What a miracle. Very nice peach flavor a bit of earthiness but I had sensed that when I had it previously. The earthiness does not interfer at all but it has less of an oolong taste than I would expect. Still a very lovely tea for the summer.

This tea tastes a lot like what I imagine a peach Bellini would taste like—very peachy, slightly effervescent, slightly tangy, almost bitter but not quite. I’m really enjoying it! I had mine unsweetened; hubby had his with honey. I snuck a sip of his before I brought it to him, just to see (shh, don’t tell), and I actually think I like it better without sweetening (I know, how crazy is that??). I will give it another go, just to be sure, but I’m not gonna experiment too much. If it ain’t broke… :)

Millions of peaches, peaches for me! Millions of peaches, peaches for free!! I’ve been a little excited to try this tea; I’ve been having very good luck with flavored Oolongs. The leaves smell of a floral peach with undertones of oak. Upon brewing, the aroma uplifts and maximizes. The peach tones become tangy and almost syrupy. the actual flavor of the tea is unlike the aroma. It has a dominant woodsy and herbaceous flavor. I can then hint at the peach only in the aftertaste. I especially enjoy the undertones of grass and lemon. I do enjoy this tea quite a bit, it would taste even better cold brewed!

If you like the flavor of peach you need to try this. The peach is a total overwhemler. Oolong? Not so much. It’s there, very subtly. This oolong reminds me more of a black tea because of it’s earthyness. There is also a slight bitterness that I’m not too fond of.

Sipdown number three for the week!! Cold steeped in the fridge while at work for 12 hours today… sigh!! But at least I had this tasty treat waiting for me upon my return! I really wish this tea had more peach in it… although there are a couple of decent chunks of dried fruit in my sample the tea has a real mild peach taste. The tea isn’t bad, in fact its quite refreshing and delicate however I was kinda hoping this would be a punch you in the face with peach flavor, cant live without you in summer iced tea blend for me… alas, I must keep looking… Thanks Inkling for the share!!

This tea is a pleasantly smooth oolong with a silky mouth feel and just a hint of mild peach flavor. I wish the peach were a bit stronger, but I’m really enjoying this one overall!

An unassuming oolong with a early peach aroma. I made a cup and my friend could immediately tell I was brewing something peachy.

The dry leaf is quite pretty, with a fair amount of decoration… how much of which contributes to the taste, I don’t know, but adds to the weight. The tea didn’t TASTE peachy, just oolong, but the oolong isn’t too roasty or dark, or even too green. I did do a very short rinse, so maybe if the oolong was flavored, that got washed away, but I tend to expect a well flavored tea’s flavor to last beyond an itty bitty rinse.

Generally a nice middle-of-the-road tea, good for everyday, or serving to (non tea enthusiast)guests tea. Plus it’s organic, so if you have some of THOSE friends over, then you can serve them something without getting lectured on the horrible unnatural chemical laden tea. Not a high profile tea though – I won’t hoard it and I wouldn’t mind leaving it out on the counter for others to try (though I won’t).

The scent of the dry leaf and liquor is early peach, or peach trees, but not heavy sweet peaches like when it’s late in peach season. This is a nice change from other peach tea, I would have appreciated (because of the aroma) maybe a hint of peach blossom to round out the profile.

The leaves didn’t expand too much during steeping, even after three steeps, and the flavor didn’t change much either. The dried fruit did rehydrate though. Definitely not a tea to forget, steep with water 195F or lower, and 2 min or less. I was using a small tea cup, and half my steeper was brewing for ~4min, which was too long: yucky. I switched to a larger mug so the brew time was short and it was fine.

The tin is rather soft and already kind of falling apart. I probably wouldn’t reuse it for tea, maybe as a pencil holder or something. The tea is heavy, I think- the tin says 4oz and the same size tin from another company is 3oz. I think TeaGuys (distributor) packs by volume though, and they pack it really full. I really don’t mind this tea for the price I paid for it, but if it was at normal price, I would be more critical. I don’t find it exceptional.

p.s.- TwoGuysTea is clearancing out stuff and Donovan’s a nice guy, really courteous and prompt CS.