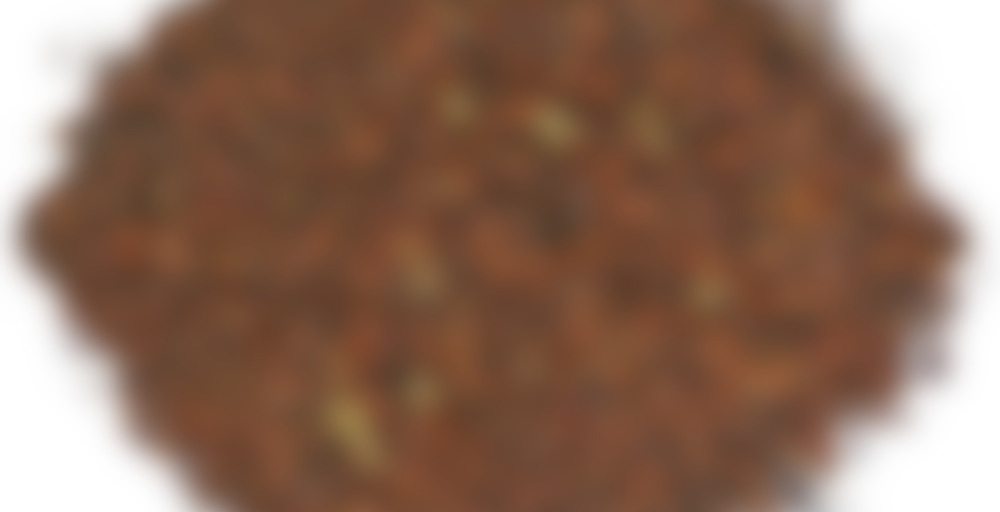 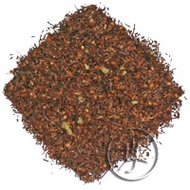 Just like the dessert that it is named after, this tasty Rooibos blend has a complex, layered flavor that gets better with every sip. Starting with a nutty sweet base you get a hint of almonds and chocolate that sends your tastebuds into rapture!

I too ordered this with my TeaFrog order. There is SOMETHING in there that has the most overpowering fruity smell so whenever I open the box I’ve stuck them in (thanks Golden Moon :D ) it hits me first. I think it’s the Hawaiian thingy. I may have to isolate it from my other teas because that is all I get until I move like, ten feet away from my cupboard.

Once that happens, I can smell hmm, something. Not sure that it is tiramisu per se, but it’s nice! Now, before I tried this, I tried, using advance scientific techniques, to ascertain tiramisu’s place in my pastry affections. But then I realized that I love all pastry in different ways and to compare them is unfair. But I DO like it a lot. On the other hand, I haven’t had it in a while. Now that I think about it, the last time I had it was in Japan, so…god only knows if it actually tasted like Tiramisu is supposed to. At that point I was willingly eating pizza with corn on it.

Anyway so the tea. It smells quite nice, but I can’t say that it’s Tiramisu-y and the taste is…hmm, I’m not sure. Very almondy. Amaretto perhaps? I can definitely see the cherry flavor mentioned by some of the other reviewed. I don’t think the rooibos is that prominent to be honest though, the blend, while not necessarily tiramisu like works well.

I DO find this tea tasty, but I have a bunch of other rooibos samples in my TeaFrog order so perhaps one of the others will speak to me more.

Second steep: as it cools it becomes more tiramisu like! That’s weird! Clearly more experimentation is called for.

Boiling 5 min, 0 sec
Yours I Like This
9 likes
1 comments
Edit

wow, I think I will have to try mine again and see what happens.

Sampling this at the moment. Tastes like the ingredients suggests…altho…not sure about crackle bits…eeeeek.

It’s probably the most creamiest Tiramisu tea/tisane I have ever tried which is somewhat refreshing…since the others have been so coffee-esque and almost bitter. I can taste the chocolate-goodness and that is the part I like most.

This is pretty good…yes…good, indeed

I hate when a tea is echoed after something and there’s a weird, random ingredient.

crackle bits? like pork rinds or what? What’s a crackle bit?

I actually really enjoyed this one. Much better than the Tiramisu Treviso by Teavana.

lol on the crackle bits and pork rinds! :) I kinda thought it was pork-related too- like the pork cracklings they made in the Little House on the Prarie books!

This is another of my TeaFrog samples from a previous Steepster Select. I’ve got some chai on the stove and thought I’d give this a try while it’s working.

What are “crackle bits”? (Do I want to know? ;-)) Whatever they are, they must be what is responsible for the fragrance of the dry mixture actually smelling like tiramisu. Uncannily so. The chocolate and cocoa alone wouldn’t do that. The rooibos in this mix is red, but I can barely smell it in the sample packet. Will my luck hold?

Alas, after steeping, I can smell the rooibos, primarily. The accurate tiramisu smell has been diluted. And unfortunately for me, since I like my rooibos to be virtually silent, I can taste the rooibos in this blend. It’s not bad for red rooibos, but I much prefer rooibos as a backdrop for other flavors to play on rather than as a flavor unto itself.

There is a suggestion of tiramisu in the taste, but oh, if it had only tasted exactly like the smell of the dry mixture! As it is, the rooibos is too prominent in the flavor of this tisane for my taste.

Those who like rooibos in their rooibos and a suggestion of flavor in their flavored rooibos rather than rooibos as a vehicle to make something that tastes not at all like rooibos would probably like this. If they can follow that last sentence…

Oh then this is definitely not for me! Your last sentence was perfectly understandable! :)

aww i was getting all excited, i love tiramisu

Thank you to TeaEqualsBliss for sending me a bit of this tea to try!

I just wrote a longer review of this that should publish soon on the Tea Review Blog, but here are some quick notes about this tea. It DOES get better with every sip, but, I am not getting much in the way of nutty flavor as described by TeaFrog, except from the rooibos.

The chocolate flavor is faint, but pleasant. I can taste a bit of the rum, but it isn’t strong either. But what is strong is a sense of creaminess in this tea which is very in keeping with the tiramisu idea. It doesn’t really taste much like mascarpone cheese, but it does have a very creamy, custard-y like taste to it. I am also not getting a strong coffee essence of the tiramisu.

I’ve enjoyed all the blends I’ve had from TeaFrog, but I was concerned about this rooibos because I’ve only had one so far that didn’t taste and smell like sour wood. I am pleasantly surprised by this blend! Tiramisu is one of my favorite desserts of all time and this tea does remind me of that taste. It is very smooth and the flavors are blended nicely with none of them standing out more than the others. You can taste the rooibos, but it is the backdrop to the other flavors and is not woody at all.
This is starting to make me reconsider rooibos. I’m definitely interested in others from TeaFrog’s collection.

Unfortunately, I have had the same similar reaction to this tea as the other reviewers. It was AMAZING in the package, smelled heavenly. However, once prepared I tasted the chocolate, rooibos, and another flavor I can’t describe but I can say it was not Tiramisu and it no longer smelled as it did when it was dry. I can just say it was ok. However, I agree with Morgana I prefer the rooibos in the background and the flavors to be the major players in these type of rooibos drinks.

Pre-steeping, my nose revels in the wonderful and delicious smells coming from the dry leaves. This tiramisu smells delicious, and it is strong enough that I can hardly detect the scent of the red rooibos underneath it.

After steeping, the aroma of rooibos has been brought to a more prominent place, but the tiramisu is not letting go of its grasp on the scent and the senses. The liquor has steeped a deep red colour, yet remains bright and clear. Eagerly, I lift the cup to my lips in anticipation…

Creamy! This tea has a very thick mouthfeel that actually starts out being a bit thin, but when the sweetness of the tea finally hits, it thickens considerably. The rooibos has come through beautifully, though it almost seems to have too much rooibos flavour (as compared to the tiramisu). The tiramisu does put forth a good showing, however. It boldly jumps out at the drinker, and lasts a while, settling in a delicious aftertaste. With each sip, I’m left wanting to take another sip and another…

I really enjoyed this tea, which is probably an understatement, considering how fast I went through the first cup. I gladly give this tea an 85 out of 100 on my personal enjoyment scale.

Time to go have another cup!

Still tasting all of my new samples! I took this to school today in my travel press, and it was just what I needed, sitting in a cold classroom. The smell is very nice, and the taste is lovely. It was sweet, but not too sweet. It definitely smells and tastes like a dessert, but there wasn’t much of a coffee-like hint to it (which I normally associate with tiramisu). That’s really not a big deal, it still tastes great!

I resteeped this during my break, but it tasted very…hot watery, more than I normal find when I resteep. I mostly just needed something to keep me warm anyway!

Smells good in the bag. Brewed it up and took a sip. SWEET IMO. I did not detect any chocolate notes which is what I wanted and expected. What is in here that makes this sweet? The crackle bits?

When Teafrog posted their “Sample deals” on Steepster I decided to go a little crazy and ordered 9 of them.

This is the first one I tried. While Teafrog were awesome in shipping and they offered very generous quantities for samplers, I must say I was disappointed with the taste of this one.

As the previous reviewer mentioned, the scent is absolutely amazing: Up until you pour boiling water on this one, you are literally holding a piece of Tiramisu in your hands -it’s that convincing !

Unfortunately, that all goes away to be replaced by the overpowering taste of pure rooibos with an accent of artificial cherry flavor -nothing else.