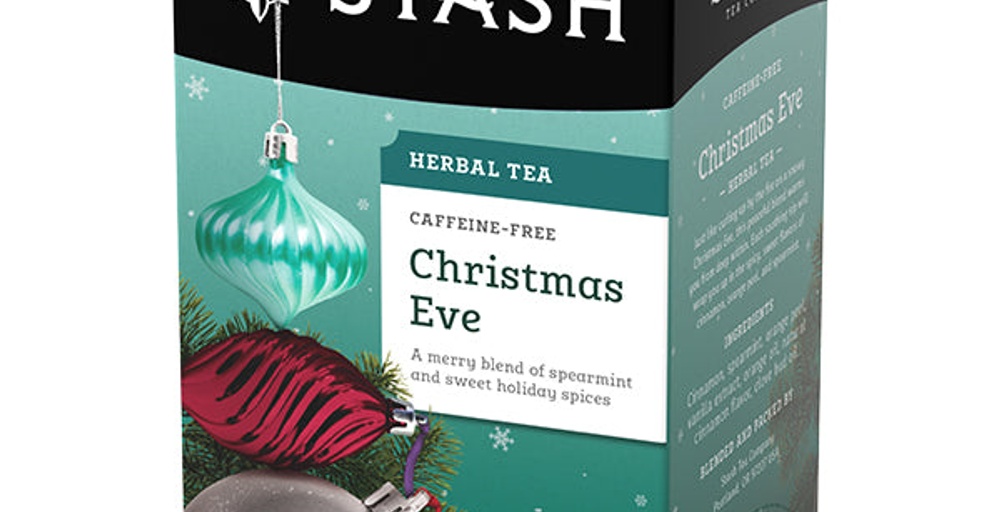 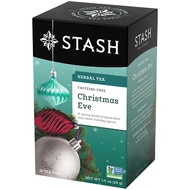 with 39 Ratings Rate this tea Rate This Tea

This tea will have you singing “All I Want for Christmas Is You” to your teacup.

Flavors of orange, spearmint, cinnamon, clove, and vanilla come together like a Christmas carol (if you’re into that sort of thing), and make this Christmas tea a superb blend to harmonize with. But this tea isn’t restricted for only Christmas Eve… While sharing a cup of this sweet and spicy tea with loved ones the night before the big day does make for a delicious tradition, sipping this blend any of the other 364 evenings can bring about some of that same Christmas cheer.

Since this blend is caffeine-free, it is the ideal hot cinnamon spice tea to sip on before visions of sugar plums (or Mariah Carey in a Santa outfit) begin to dance in your head.

I’ve had to wait almost a year before drinking this tea bag but I’m so very happy that I waited.

The teabag smells strongly of clove and cinnamon but it’s very sweet and festive, the spearmint is also noticeable. Also rather strong for a tea bag.

The tea tastes rather sweet thanks to the spearmint. The clove and cinnamon are the main characters but they blend nicely together and the spearmint and orange help to sweeten and lighten the whole blend. It is festive but I would also say it was an acquired taste.

Ahh..I read this note and realized that I have a bag of this in my tea stash also that has been waiting patiently! I just got it out to take to work with me, as what better day to have it!
Happy holidays to you as well!

My boyfriend’s mother gave three sachets of this as a gift to me just before Christmas, so I figured I’d bring them home and actually drink the tea on Christmas Eve! Steeped up a cup each for my mom and I and then, finding it to be rather weak, dipped the third teabag intermittently into each of the cups for a bit more flavour.

I was initially worried at the spearmint aroma emanating from the bag (as I dislike mint), but the mint is fairly light here. As are, well, all the flavours. I mostly taste mint, with a hint of sweet cinnamon spice.

I will admit… I’d prefer not to drink this again. I definitely appreciate the chance to try it though, and also the fact that she didn’t heap me with an entire box of teabags!

I had this earlier. I mainly taste the spearmint and cinnamon. And think this is really good.

I got this in a trade from someone, but it’s been so long, I’ve forgotten who it was. But this seemed like just the thing for a wet, windy day here in Atlanta. Not that it’s cold, but you know.

It smells of cinnamon and mint the most. I admit, I’m a little apprehensive. The scent reminds me of a Yogi tea, which I’m not a fan of at all. Also, it’s a tisane, which sometimes disappoint me. (I like the tea base to be bold!) The flavor is very heavy on the cinnamon. It reminds me of those cinnamon peppermints they sell around Christmas. The ones with the red centers. Mint is the second-strongest taste, followed by a hint of clove. I can’t really taste the vanilla at all, which is something I was looking forward to. And the orange peel is non-existent. All around, this isn’t something I’d drink again.

This smells like holiday booze! It tastes like it too!It says it has cinnamon, orange peel, spearmint, vanilla, clove flavors in it but they all blend together to make it’s own flavor. The only thing identifiable on its own is the spearmint. As it cools – or iced rather – I can taste the orange a little.

The flavor isn’t incredible by any means…but it’s ok. The flavors aren’t really defined but it’s fairly strong for a bagged tea and I can see how it resembles a holiday drinks so props there!

I tried the Christmas Eve Herbal loose tea many yrs ago, and for me it was just OK. I remember it being overly hibiscusy, and it didn’t rock my world. I think they have reformated the blend a few years ago, and I haven’t tried it. On memory, I would give my experience of this tea between 65-70.

Still from the tea swap (thank you Keen Tea Time) a spiced herbal blend. Cultural expectations and all this tastes not at all christmas-y to me – it´s spearmint, orange rind and american cinnamon mostly. Spearmint has its own tang, different from the usual mint around my parts of the world, to me its association with toothpaste is unavoidable. And american cinnamon is also different from my regular cinnamon, american cinnamon to me is the taste of tooth-friendly chewing gum. So you see where this is going. Instead of Christmas associations, this sounded like a very tooth-friendly drink. And it was a nice, palate cleansing sort of taste, I liked it. Orange was also present, but my mind focused mostly on the spearmint-cinnamon thing. Cloves I did not detect.

The one drawback of this tea for me was that it was so thin, so weak. I like that they did not use fillers like chicory (à la Lipton) which taste muddy to me, but the poor spearmint was just not up to the task of my bigg-ish tea cup. When rebrewing I think I will up the dose or halve the tea

I know what you mean about it being weak. I usually brew two or three bags together! :)

Great minds think alike, because that will be what I will do! or brew much less, which is also an option. I really liked the balance of flavours, it tastes very sharp and clean, sort of pure, to me, but I think it is that toothpaste – virtuous chewing gum association!

Meh. Two immediate strikes against it (and not the bag) – there is no tea in this and I have never liked spearmint. The cinnamon, vanilla, and clove are all interesting flavor ideas but the mint overpowers them. I will say, after it reaches room temp it isn’t bad. Just not my cup of joy.

Boiling 3 min, 0 sec
Yours I Like This
5 likes
3 comments
Edit

This must be the one that tastes like mouthwash.

I decided I like how Tazo does mint, and since Stash was originally created by the same guy, I just figured.

When I opened the box I got hit by a STRONG mint odour and was initially very worried. But it mellowed out when brewed, and sniffing it, it smells of a mellow mix of orange, cinnamon and nutmeg, with just a very small hint of mint.

It tastes of a mellow mint. I could have done five minutes, I think; I decided to test the centre of the steep-range the box gives. Just so I could simplify my next cup—go higher, or go lower. Mostly mint, with a bit of orange and almost some spices. It’s nice to curl up with.

Eh, its okay but it looks a bit better than it tastes. I have the loose variety & its very pretty in the infuser but tastes a bit too fruity for my liking.