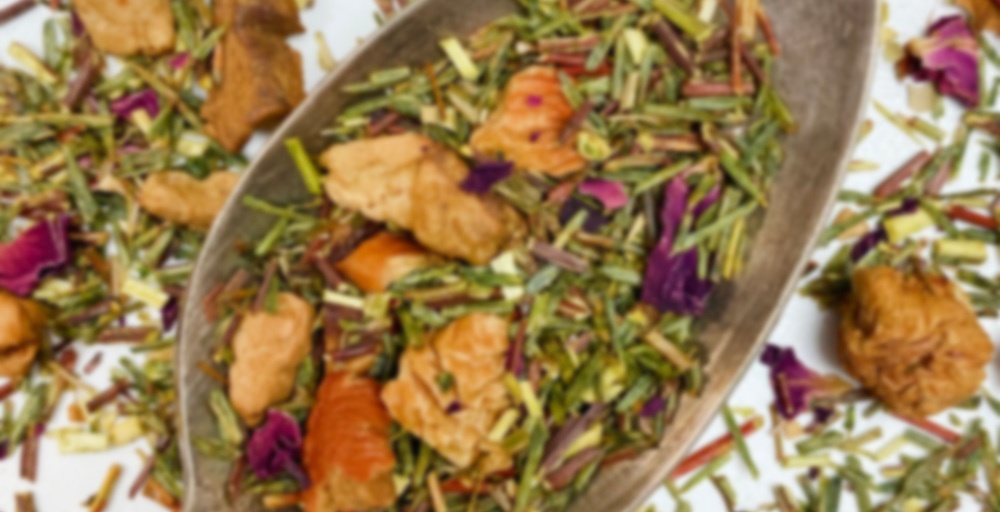 by Plum Deluxe
81
You

When thinking about a great apple flavored herbal tea, we decided to give it a twist by adding a custard apple (cherimoya). This is an Asian fruit (pronounced share-moy-ya) that is more commonly known as a custard because of its taste. Think of a creamy green apple with a simple, clean, not overly sweet finish. It’s the perfect herbal tea for after dinner or a calming pick-me-up.

This is my evening cup tonight. A small sample from Plum Deluxe. It’s quite nice. Green rooibos tends not to have the heavy woody flavor, which I appreciate. Red Rooibos is good for heavy spice teas, but this is fairly light and dessert-y, and the red rooibos would have ruined it. It is good, but as it cools it ends with a slightly soapy flavor, which may be the rose petals. Not a fan of floral teas. So I will not be ordering any of this. But glad I got to try it.

Made this as a hot tea last night. Left the tea steeping in it and only took the teabag out today in the afternoon. I’m only now drinking it.

This is fine. Sweet apple. Fairly crisp apple actually. The slightest touch of creaminess but not overtly custard.

Well, after Googling “Cherimoya” (I’m Idahoan, any fruit or veg more exotic than the humble potato is likely something I have never heard of or tasted) I am very wary about this tea… many sites are comparing the flavor of this South American fruit to banana, and anyone that takes the time to read what I write here on Steepster knows I am the one person that hates banana teas. But… it isn’t just like, a general dislike. We’re talking extreme aversion. To the extremes that if someone is eating a banana in the same room as me I’ll retch, or if I smell the peel in a breakroom garbage can, it’ll set off my gag reflex. Everything about the taste, smell, texture, and even artificial banana sets me off. I don’t know why I’m this way. No other food is like that for me.

So, here is this cup of green rooibos (and I really like green rooibos!) steeping in front of me. I don’t smell banana coming off the cup, at least… more of a pineapple/papaya aroma, with a slight hint of stonefruit. I taste… mostly peach? Yes, I think I’m tasting peach, with this sort of tropical (that pineapple/papaya flavor) aftertaste. A little pear-like, as well. Maybe my Idahoan palate just doesn’t really know what to compare this fruity flavor too. Surprisingly, I’m not really even getting apple, despite the fruit being called a “custard apple.” But I can’t taste banana, at least.

I’m not sure how I feel about it… what I’m tasting is like a weird fruit salad combination, and while I like any of these elements in their own right, I’m not sure how I feel about this peach/pineapple/papaya/pear salad. It is definitely interesting, and I’m glad to expand my palate in that regard, but I don’t think this is something I would care to have around… maybe as iced tea? Hmm… With this small of amount of leaf I prepared a warm cuppa, but I am now thinking that perhaps this would have sat better with me as a cold brew. If we ever cross paths again, perhaps!

Well yay for no banana! XD

I’ve occasionally found cherimoyas at farmer’s markets in California or at specialty fruit stand stores that get all fancy with their importing. Maybe a fancy Whole Foods like store in Austin. It’s kind of a random fruit to see in a tea!

I’m totally baffled and slightly amused at how opposite we are in regards to banana! LOL!

Okay, I had no idea wtf a cherimoya is, so I had to look it up. The descriptor I found said something like a combination of apple, pineapple, banana, peach, and something else? Which sounds like a lot, lol! But this smells nice and it’s green rooibos, yay, so I’m excited to try it!

Well, I definitely get apple and a little bit of sweet pineapple. I would definitely say pear is in the mix for me as well, and I can understand why someone would say banana.

But mostly it’s apple, and it’s a lovely cooked apple with just a hint of cinnamon and a nice big glug of crème Anglaise over the top. It also sort of reminds me of apple pie with French vanilla ice cream melted over it… Needless to say, it’s yum!

I had this with my two advent chocolates for the day – the DAVIDsTEA matcha advent had a salted caramel matcha-infused white chocolate star, and the La Maison du Chocolat advent had a few dark chocolate-covered almonds. A really nice pairing actually, as they had a great contrast and played well off each other.

The matcha white chocolate was decadent and creamy, of course, but there was a sort of slight texture to it that I assume was salt? There was a nice salty presence to it as well which was delish. I wish there had been more matcha though, as I didn’t really get a matcha flavor at all… The chocolate almonds were so good because the almonds were really nicely toasted and had such a rich nutty flavor, and the dark chocolate really contrasted well with its more bitter notes.

Yum, amazing evening snack! That is all. :D

Banana?! Okay, now I’m not sure if I should steep this… (I didn’t know what cherimoya was either…)

Oh no! Well it’s not super banana, I think it’s worth a try…

Hmm I dunno dear, I’m not sure I would’ve even thought banana if I hadn’t read it somewhere. And no one else mentioned banana?

It’s been a long time since I’ve tasted cherimoya, but I feel like I’m getting some of it in this cup. I recall it being custardy in flavor. The rooibos is a little drying. It’s an okay fruity cup, but could use something to make it pop. I’m also in a shitty mood and it’s hard to be present and appreciate much in this tea. Sometimes I think I’m meant to live remotely in the woods instead of in a city.

I always think I’m meant to live remotely, far away from a city. I get you. I do hope your day looks up from here though! :)

I have no idea what a cherimoya even is…

Plenty of people are stressed out these days, and then there is holiday stress on top of that. Too bad we can’t all go around offering cups of yummy tea to these people and tell them to chill out!

Thanks! I have a girlfriend who is living in a tiny house on some acreage she bought in Tennessee while she builds her dream home. She has so much space away from other people and it looks delightful!
The extra holiday stress is a big part of why I hate this time of year. It’s the opposite of what we tell ourselves the holidays should be.

That is why years ago I tossed aside celebrating “Christmas” (it has no religious connotation for me anyway) and I now observe the non-religious, non-commercial Festivus. (And yes, I only have a single aluminum pole up in my living room as “holiday decor”).

I’m not sure I’d want to sit through the airing of grievances this year, but I could sure go for a festivus miracle!

I never saw that episode, but am familiar with the reference. I do have an aluminum pole in my house for “structural reasons”.
I’m going to have to make the focus more of a winter solstice thing which would fit seeing as how my house is in some level of Halloween mode all year.

Plum Deluxe Advent Day 5
(backlog from yesterday)
Yay! Very happy to see this, as I really loved the sample I tried last week. This is just as good, if not better, than the first cup. Definitely something I will be repurchasing.

I liked this one too, to me it was very apple pie with ice cream. :3

I just got weird fruit salad, heh. I would have preferred apple pie with ice cream!

The apple flavor is quite delicate. I definitely see where this tea is going. Mild spices, but mostly just sweet apple. It’s really light and refreshing. This is the way I wish more apple teas could be!

Y’know I meant to find some cherimoya this summer and then I never got around to looking for it out at the market. My loss, for sure. This was a nice reminder of that unique and delicious flavour though. It’s not a great match but it does certainly have the combination of golden apple and a silky kind of custard/cream alongside those fresh green rooibos notes. Makes me want proper cherimoya even more though. I’ll try to remember next year…

Tangy, like a sour apple, sweet like a pineapple, and creamy with a a fragrance of banana is how I characterize the cherimoya. While this tea is not an exact replicate, its flavor profile is right there. I am glad it isn’t an artificial scent. The woodsy green rooibos allows this tea to be resteeped with a lingering flavor that still comes through. I coldsteeped my cup after brewing with hot water. Not a must-have but definitely try it if you like a unique fruity herbal blend.

Thanks for the samples, Plum Deluxe!

I’ve never had a custard apple before, so I can’t attest to how much like one this tastes. If they’re anything like this tea though, I’d be happy to try one. It’s got a sweet, creamy, fruity taste that’s a little bit appley (although that could probably also be due to the apple pieces), and maybe just a bit like a pear.

I’d like to give it a shot iced. It’s lovely hot, but I’d imagine it’d make a nice iced tea too.