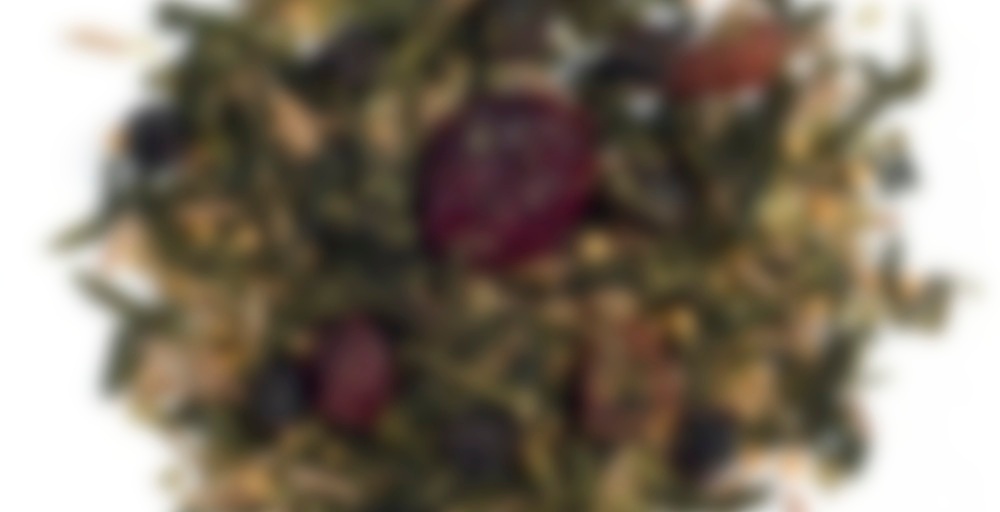 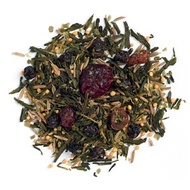 We were inspired by David Suzuki when we dreamed up this tea. It’s an organic blend of Japanese sencha with Canadian-sourced cranberries, blueberries and sea lettuce. A little bit sweet, a little bit fruity with an oceanic hint. Plus it’s entirely sourced from farms that meet the highest standards of sustainability. You might call it an homage to everyone’s favourite environmental icon.

I didn’t think this tea was supposed to be out until tomorrow (ok, today), but it was there, so I bought it! I initially thought it would be loaded with juniper and other icky things, but it sounded interesting enough for me to give it a try. I have a weird feeling it’s going to be rather tart though…

The dry tea has a very interesting aroma. I honestly can’t place it at all. A bit of berry tart/sweetness, and perhaps I’m smelling the sea lettuce. It’s quite a strong aroma, as well. Also, the girl at DavidsTea was nice enough to load my package with fruit :D Cost more, but oh well!

Ok – definitely not tart like I was expecting! Actually rather refreshing. Tastes sweet and a bit like blueberries. I’m not placing the other flavours, but it’s cool on the palate. Again, no apparent green tea flavour, but I’m sure it’s there.

I think this one might be good cold-steeped. I think the berries need more time to infuse into the brew, personally, particularly the cranberries as there were a bunch in the infuser and I’m not tasting any cranberry (or if I am, I’m attributing it to something else).

Much better than I was expecting! Pleasant surprise :)

Oh I’ll be honest I am jealous. You live in a city with a Davids Tea don’t you? I am glad I only have a bike, as if I had a car I can assure you I would drive to a Davids Tea every second weekend (1.5 hrs). It’s probably a good thing I don’t have a car or live by a DT now that I think about it (being a student and all =\ ).

That I do :) In fact, the DavidsTea is in the same mall as my gym, and the mall is literally a 20-25 minute walk away from my house. I assure you, they now recognize me at my local store. I literally came in daily one week. And the one girl remembers the time I went in to get 10g samples of all the teas they were putting online.

Sadly, I am also a student. But with a car. And a (currently nonfunctional) bike. Easy access means I have ridiculous amounts of DavidsTeas… and am very, very poor.

I am so curious about this one. I mean, a tea inspired by David Suzuki? How cool is that?

I thought it was kind of neat too. And so thrilled that it contained neither juniper nor peppermint (as I had expected)!

That is super cool, honestly, I was expecting some pretty bad reviews of this tea. I wasn’t going to try it, but now I think I will.

I’ve been meaning to write this for hours but I completely forgot.

I let it cool down to nearly room temperature before I got a chance to drink it. I tasted mostly blueberry with a bit of tartness from the cranberry. It was followed by this saltwater type taste. Kind of interesting, but not something I’d like very often.

My mom couldn’t taste that part. She was like how are you getting salt? It’s really like vaguely seaweed but it really tastes like ocean air.

Kind of interesting, like the environmental/sustainability aspects though. Probably would not buy except for those aspects of it but taste kind of trumps that for me just a little, and there are plenty of other tasty blueberry teas.

I love the name! and that’s cool how its related to the environment. Too bad it wasn’t that good :(

Very unique, with ingredients like mustard seed and sea lettuce. I’m glad I tasted it, but I’m even more glad that it’s finished. BLECH! It’s just not for me.

\0/ for finishing up the last of the tea. Especially with David’s Tea, I’m more excited about getting rid of the old so I can fill up my tin with something (hopefully) better.

That’s exactly it Cavocorax – Davids Tea is always coming up with new and exciting tea to try. So I’m excited to finish some old unfavorites I have sitting in my cupboard, to hopefully make room for some actual favorites

sample from whatshesaid whoop whoop!
i knew this was a unique one and really wanted to try it out. and honestly, this might be one of the most berry tasting teas i’ve tried. whoda thunk?! but really. usually berry greens just taste like greens but this one is greatly balanced. i kinda got over davidstea for a while, but this might spark my interest again. just a little. yummy!

Smells fruity first of all.
Tastes better than I was expecting. I taste the green sencha with slight hint of berries with some freshness from the sea lettuce. A couple of sips in, the caraway and mustard started to take over. I don’t think I am a fan of mustard in tea.
I am glad I got to try it, but I don’t think that I will re-stock my small 12gram sample.

Ya kinda strange for there to be caraway and mustard seed in tea. Maybe it was all in my head, but I could taste the mustard a little bit. Maybe I just knew it was an ingredient, so then I tasted it, I don’t know…..

Wow, I don’t hate this one! I was so ready to not like it but it snuck up on me. The sea lettuce is definitely there, and it has that same asian restaurant flavour that Splash has, but the berries seem to mellow it out and the tea has a really high natural sweetness to me. I had it hot and without sugar and am glad I did, because I don’t think it needs any sweetener. Am definitely curious how this one will taste iced.

I tried this one yesterday and forgot to log it, but was surprised that I didn’t hate it, too! I didn’t know why or how I ended up buying it because it sounded really offputting to me, but it’s not bad.

I’ve been really, really wary of this blend. Splash and I were not friends, and this smells a lot like that one. Still, one of my DT protégées liked it, so I decided to try it last night while we were hanging out. I had it iced with sugar. It was…alright. It wasn’t horrible, and I somewhat enjoyed it, but I won’t be ordering it again. It tasted like sea lettuce with a backhint of berries, but then a huge metallic twang at the end of the sip that really just put me off it.

Liquor: Clear green liquor with a blueberry and oceanic nose – interesting, because blueberries often flourish in geographical locations that are close to the ocean

Flavour: The blueberry note is prominent but definitely challenged by the sea lettuce which adds a new dimension to the blend. The cranberry adds sweetness and the green tea contributes to the entire flavour.

This totally reminds me of Splash, it must be the sea lettuce. I hope this doesn’t become like a “thing” for Davids. The dry leaves didn’t turn my stomach QUITE as much as Splash did, but the tea tastes much more sea lettucey/salty/weird. I was hoping the berries would kick in and be the star, but noo :(
It’s actually not SO bad until I get to the aftertaste and the sea lettuce taste just starts taking over everything and I’m like “nnooooooooo!! D:”
But yeah, sustainability = good, David Suzuki = good, sea lettuce tea = bad.
Oh well, not my thing!! What am I gonna do with the rest of my 25g bag??!

Edit: IT ALSO GAVE ME A HEADACHE! This tea has it out for me!!!

Try to swap it! But not with me, haha. I have a 28g bag to finish myself. :) I definitely didn’t hate it like you did though.

So waking up to not a beautiful day I see the line of beautiful trees that stand between me and a rather boring and grey line of buildings. I love the trees they make it feel like I’m separate from all but what I want to see..trees forever green full of life and color ..well this tea needed desperately and expertly drunk at this moment,this damn beautiful moment.

In the pouch it smells like a decent green tea with light notes of fruitiness ( reminds me of Merry Cranberry but softer and green).

The liquor is oddly clear makes me worried it will be too soft serve, but we shall see. Don’t judge a tea by it’s color…glass..ummm can we make that saying work here?!

First taste: The most gentle tea in existence. No bitterness but a light fruity after taste with a whisper of tartness. Feels like something you drink after a heavy meal.

Reminds me of the lingering after-taste a while after eating an apple.

Perfect for palette cleansing and people who don’t like traditional green tea taste.

Final Verdict: Too light,too timid and too underwhelming. It is nice and light and may make a good iced tea in the summer. I prefer my green tea to be itself strong or light but it always tastes like green tea because it’s a beautiful sensory thing accept no substitutes.