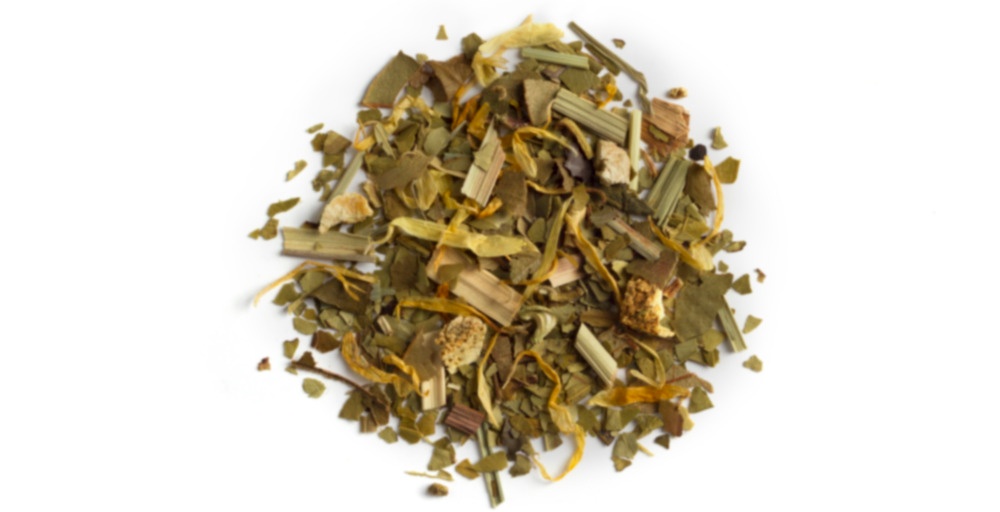 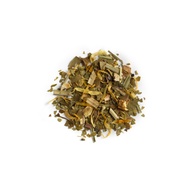 Maté with a twist

Need a little help getting up in the morning? So did we – until we tried waking up to this sunny maté blend, with lemongrass, lemon myrtle, lemon zest and pretty yellow calendula petals. It’s light, smooth and refreshingly citrusy, with a welcome energy boost from green yerba maté. So steep yourself a little sunshine – it might just make you a morning person.

Thanks, Kittenna for a bit of this!

This tea’s name makes me want to sing. YOU’RE SIMPLY THE ZEST! BETTER THAN ALL THE REST~~ but I’m not sure if it’s true.

It is what it is…lemon and mate. I am not sure if I like the flavor of lemon myrtle with green mate. It tastes too much like green herbs. I am not a fan of this I don’t think…it’s just flat. If I could taste the other aspects of lemon in here, it might be better. I don’t think this is enough other flavors for me with the green mate. I think I like roasted mate better, or at least something that doesn’t make it taste even more like medicine.

Wow it would be amazing if we’re slamming things over by the trash compactor and recycling bins if it didn’t cause vibrations in my wall not close to these things at all, and had not been happening on and off for the past 3 1/2 hours, causing me to miss classes because I had to get myself some headphones, cause guess what else gets set off? A yapping dog.

LOL @ the tea name. That’s exactly what I thought too.

Hahaha, I sing the name of this tea too (although I don’t think it’s simply the best, sadly, not a big fan.)

I’ve had this sitting around for ages, so figured the “morning” would be a good time to try it. Still sick though, so this is probably not the best time to be drinking new teas…. oh well. Although my friend/office-mate raves about this tea and tells me that she absolutely loves to mix it with otherwise non-caffeinated herbals, I’ve been wary to try it as citrus flavoured blends and unroasted mates have not been appealing to me lately.

Anyhow! I got a nice refreshing lemony citrus aroma when removing the infuser basket from my mug, which smelled better than I was expecting.

Unfortunately, this cold is obviously influencing my ability to taste things right now. I can kind of taste the lemony flavour if I try, and I can tell that the mate has a flavour, but I can’t quite taste it, although I can perceive that the tea is pretty strong. This clearly isn’t a case of poor flavouring, but a case of stuffy nose. Sigh.

Oh well, a dud of a tasting note. I think I can see how this would work well with herbals though. Interested to try it when I can actually taste properly again!

Dry Leaf Nose: A refreshing blend of maté and lemongrass.

Liquor: Green, with a hint of yellow. Aromas of lemongrass and maté.

Flavour: The cup boasts a definite maté taste, with sweet citrus flavours. The lemon myrtle comes through in the aftertaste.

Very intriguing…perhaps a new tea that I will actually like??

This was one of my go to morning teas for a few months. It tastes like strong lemon and green mate. If you like that, you will like this tea. Much sharper than a traditional lemon herbal.

I am definitely growing to like this one! I am very excited because I was worried that I’d never find another mate that could capture my heart and taste buds like Chocolate Rocket, but then DAVIDs came out with this one! In terms of flavour, it is definitely citrusy with some nice earthy mate undertones. You get the citrus first, and then the green mate (which I was worried I wouldn’t like but now know that I enjoy). If you don’t like green mates, there is not enough flavour to mask it, but if you do, I highly recommend this tea, the citrus flavours complement the green mate taste wonderfully.

Like lemon and green mate? Think you may like them together? Then try this tea. It is exactly as advertised, a seemingly simple blend of intense lemon and green mate flavours. My first brew was a tad too mate for me so I’m going to ratchet down my boiling temperature next time, but overall it is a pleasant tea. There aren’t any surprises here, but I didn’t really expect any with a name like this one has, either.

We used up the last of our sample of this to share a pot yesterday morning and I enjoyed it! It was good and refreshing and something I find myself craving occasionally. It’s lemony, but not overly tart. While I don’t feel the need to get a tin and stock up, I wouldn’t mind having some around to dip in to occasionally. This is a restock for me, but only a little one.

Woke up full of grump and snark today and outside it is rainy and I soooooo do not want to leave the house today. I need as serious boost and this is the last mate I have that I have not tried yet it is steeping now.

Smells lemony which I love even if it is in a sore throat lozenge kind of way.I will drink anything today if it will wake me up and stop the rain. I love Dt’s stimulant teas they are like strapping you to a rocket or gently punching you awake…I always end up full of energy with no real burn out like energy drinks or too much caffeine. Today either of those are much needed boosts.

Once brewed it smells even more wellness-tea like but I’d drink rocket fuel right now. It tastes like lemony wellness..but unlike wellness teas this isn’t gross or boring it is actually totally mellow,refreshing and is a totally pleasant start to any day I am unprepared for the energy boost because it doesn’t taste like any incoming energy. It is a perfectly drinkable drink. Wonder if icing would be nice.

The taste doesn’t blow my mind but I like it. It is mellow,bright and a kick in the ass(hopefully)

Well I feel more awake but nothing like I wanted. What a disappointment! No punch no kick. Just mellow. Sigh major points docked unless I get serious energy in like 5 . I remember Amazonian Chain being OMG IM FLYING energy this is meh.like the taste though .

an okay tea. i have chocolate rocket that i like better as a mate, and many citrusy teas, so i won’t be buying any more of this.
it tastes very green, quite strong. the lemongrass dominates, and i think that’s where that green, grassy taste comes from.
my mom really enjoyed this one though! so at least it wasn’t all for nothing!

Boiling 4 min, 0 sec
Yours I Like This
2 likes
1 comments
Edit

I love this one sooo much, I really love the lemongrass in it. It is really enjoyable to drink in the morning and whilst studying. It really give me the energy I need to wake up and stay up. I am smitten with this tea.

mostly i buy mate for my boyfriend. and then enthusiastically feed it to him. he approves!
this is a delicious breakfast drink!