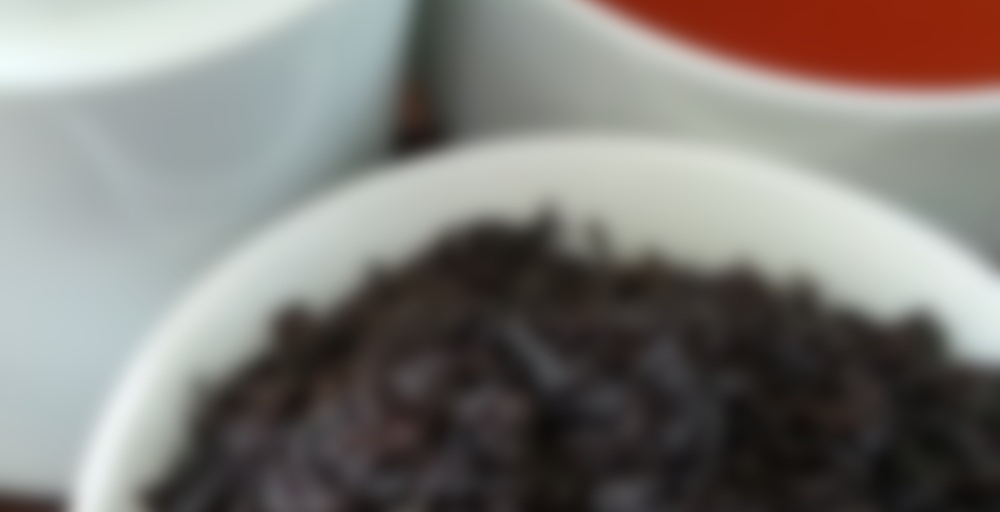 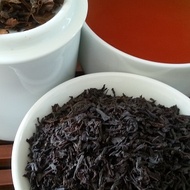 by Butiki Teas
75
You

Kenyan Obsidian originates from the Mount Kenya tea region in Kangaita, Kenya. Tea is grown at 5,000 to 7,000 feet above sea level in this region, where the soil is rich with minerals. This complex tea has mahogany, apricot, biscuit, malt, spice, and roasted notes. Grapefruit notes appear towards the end of each sip and linger. We highly recommend our Kenya Obsidian as a breakfast tea or iced tea.

Not entirely sure what to make of this one. The dry leaf is jet black, but once wet it looks like a dark green tea. I was puzzling over it while sipping it piping hot, then returned to it after it had cooled a bit. It was more palatable then, with suggestions of baked bread and apricot, but it was still harsh enough that I decided to sweeten it with a bit of agave. This took some of the edge off, but I opted to go further still and added a little splash of soymilk, which turned the liquor an unappealing grey color. It tastes quite nice this way, though – a gentler flavor with maybe some vanilla-y notes.

I’d probably use a shorter steeping time and/or cooler temperature in the future, and maybe see how it takes to icing/cold-brewing.

Wow, this is strong. I used 1 tsp of leaf for my first cup, and then wandered off for a few minutes while it brewed. I came back to it and added a splash of milk, not really sure what to expect. The initial sip nearly knocked me over – this one is SO, SO malty it’s almost thick. It makes my mouth feel kind of furry and icky, if I’m honest. I’m not sure I’ve ever had a tea as malty as this one before. There are other flavours, too – baked bread, prominently, and it’s also kind of earthy and woody. It’s rich, though. Maybe too rich for me. Even though I had lunch recently, I feel like this one’s making me feel a little queasy. Definitely not a tea to drink on an empty stomach, for me at least! On the plus side, it is keeping me awake. Given that it’s Friday, and the end of a horribly busy 6-day week, I really need something to keep me conscious this afternoon. I’m not getting out of bed tomorrow, and that is a FACT.

Not sure about this one.

I know what you mean. This one is intense. I understeep it a bit hah.

Sample from Kittenna. Thank you!

Finished it up today, and while I liked it I didn’t love it. Of course, burning my tongue on my quesadilla might have contributed to that, but it was fairly astringent/bitter/something I didn’t love. I didn’t add milk to it because I just wasn’t feeling it.

Still, I’m sad that one more Butiki tea is gone from my cupboard.

My replicator seems only capable of making hot earl grey. While fortunate when we had a visiting Captain, not my preferred beverage. And there is only so much raktajino I can drink. Then I found this on a recent Shore Leave. Scent- I get some malt, and baked bread. The flavour is similar, with a hint of spice.
My First Officer says there are apricots, and I get some as the tea cools. Will have to make sure the Mess Hall has some on hand before our next mission.

Make it so, Number One.

I am definitely getting baked bread and cinnamon as I sip but the aftertaste left behind is much earthier. It’s quite good but there are other blacks I would reach for first and thus I am not sad to see this go. Still it was fun to try so thank you Kittenna for the sample.

Last tea in my Butiki order! D:
So the dry leaf smell of this one was kinda bready, which I wasn’t expecting. For some reason I was not expecting to like this at all. I was expecting it to be woody and earthy for some reason….where I got that idea…I don’t know. xD So the dry leaf smell really threw me off.
And the actual taste even more!
It was kinda earthy and woody, but there was still a lot of malt. Not as much as Crimson Horizon but there was still a lot more than I expected!
Not my absolute favorite, and not something that I’m gonna only save for special occasions or something. It’s good, but not my favorite.

This is yummy. It is toasty and bready and really good for a winter morning. I imagine it would not go well to oversteep this, as it already is pretty strong. I will enjoy what I have of this for sure, but I probably won’t notice overmuch when it is gone, unlike so many other Butiki teas in my cabinet.

This is a nice, mellow cup for me. It has a sweet, comforting smell (much more prominent with the dry leaf) and I’m so happy I picked it. The taste isn’t as strong as I expected, considering the smell, but I may not have steeped it long enough/used quite enough leaf (I only bought 1/2 an oz so I’m being a little stingy perhaps). My only other experience with a Kenyan tea is Davidstea’s Kenyan Tinderet which I didn’t care for at all (it was very bitter).

I believe this was one that came free with one of the group orders we did, and then just kind of got split up between the people in the order?

I made mine yesterday morning to drink on the ride to work; I saw in the description this is recommended as a breakfast blend and my morning tea to work is as close to a breakfast tea as I usually get; so that seemed like a good match. Definitely debated drinking this with milk, especially after reading Kittenna’s review, but ultimately went with a straight mug.

Sipping on it, all I could think with this blend was that it was very bready tasting with lots of cinnamon notes, and maybe even nutmeg? I’ve reread Stacy’s description for this tea and I can see that I was probably experiencing the “Spice” and “Biscuit” notes she described; but I think I missed out on the other things she’s made note of.

I don’t know – this was nice, but not overly complex or layered in my opinion. Overall I suppose I’d probably just call it somewhat average. Part of me is relieved by that; I don’t have to worry about getting more. If that’s even still an option for this one; I don’t know if it’s sold out yet. I have enough leaf left for a very small cup; but I’m going to pass it on to a coworker named Nathan. I’ve been sharing tea with him for a while now; he’s a bit of a tea snob in his own right (he literally wont drink anything but tea), though his main interest is Chai.

So far his favourite tea I’ve shared with him has been Latkes and Applesauce, coincidentally also from Butiki. I think he’ll appreciate this one though!

Yes, you assumed correctly. I just split between those involved, and someone got the last of the package in their box. I don’t remember who. :P I had my single cup.

The studying is never-ending. I’ve not had coffee since Halloween. Enter Kenyan black tea.

This one is surprisingly creamy, while still the typical deep, dark Kenyan black. Quite enjoyable. A nice boost to get me through the next few hours.

Good luck with the studying!