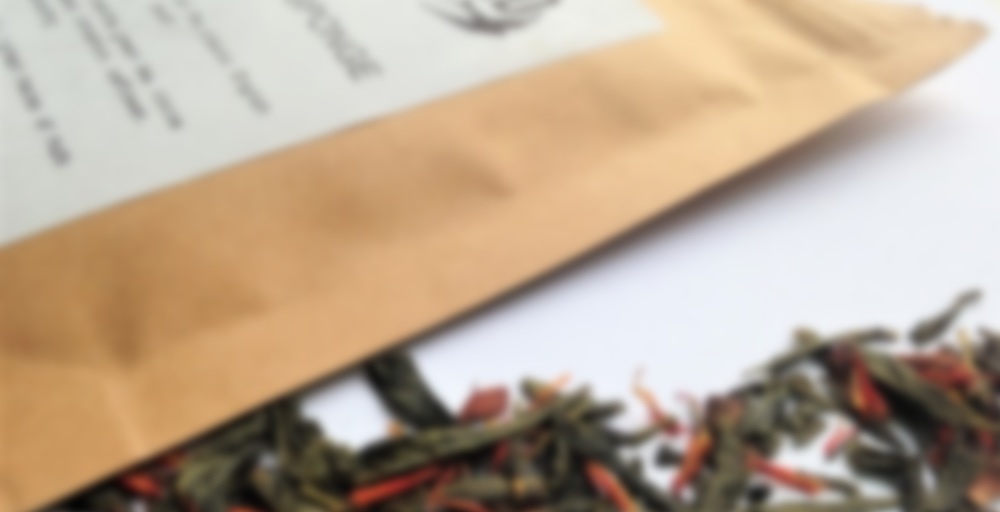 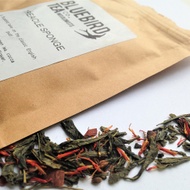 Sticky, indulgent + moreish, Treacle Sponge is a British staple and for a good reason too! This tea is slightly sweet with cocoa yet lightly spiced with cinnamon, aniseed + safflower. Best enjoyed without milk (+custard too!).

This sample is also thanks to Mastress Alita. I didn’t remember if I’d eaten treacle before, but once I tasted this tea, I realized that I must have because this flavor is very familiar! This tea is so sweet, and it has a cakey flavor as well. I need to remember to drink green tea while it’s still warm though, because with this and many other green teas, as they sit there, the flavor seems to get a bit strange. Maybe that’s just me. But anyway, when I was drinking the first half of this warm a few hours ago, it was quite nice. I don’t enjoy treacle enough that I would seek out more treacle teas, but it was fun for sure.

I believe Treacle is the same thing as Molasses.

So I’ve looked it up, and apparently golden syrup also counts as treacle. And “black treacle” is the same as molasses. The more you know!

Aha! I’d say this one is more like golden syrup than molasses. So I guess we’ve all had treacle before!

I’ve actually never had golden syrup, has far as I know… only caramel, which is what this tasted like to me, so that’s probably the closest thing my palate could identify to form an association. It certainly tasted more like caramel than honey to me. And I know I’ve never had the actual dessert where golden syrup is soaked in a sponge cake. I really love this tea, though… I was sad it lost the tea elections!

This came from Tea-Sipper, I bought some of this in her stash sale a few months ago along with some other goodies.

Not loving this one, maybe I need to play around with it some more. I don’t get any of the tasting notes that other’s have mentioned. There was a lot of safflower in my strainer. I wonder if that is what I’m tasting so much of. I get notes of anise, but am missing the cake aspect. The Cinnamon and cocoa shell comes through faintly and more so in the last few sips. For a Sencha it’s not very buttery. Maybe I didn’t store this properly. I’m not sure what treacle is supposed to taste like but I get the impression it’s supposed to be quite sweet which isn’t the case in this cup. I hope I have some better luck with this one in the future.

Hmm, this was a very buttery sencha base for me. I remember it being very caramel-like in flavor. I ordered more during the tea elections, but the shipping from the UK is taking forever to get here. * sad face *

That just means you’ll enjoy it even more once it arrives! (: Hopefully the next time I make it it will turn out better.

I found it really buttery, too. Mine also had a lot of safflower – some of it I had to pull apart since it had clumped together so much!

I definitely put a few safflower clumps in mine. I’ll try to break it up next time. Thanks!

I HOPE this one isn’t losing flavor already! I suggest trying a two minute steep… sometimes that brings out more of the flavor while not oversteeping the base tea, especially when it’s a green tea.

I’ll definitely try that! Thanks.

The fifth of Bluebird’s Tea Election candidates. As an aside, there was something odd about this tea’s profile when I tried to add my note earlier. It looked different, and clicking “review” just took me back to the Steepster home page. I faffed around for a while, since the records for other teas looked fine and seemed to be working. I finally got this far by clicking “edit tea info” and then saving. Not sure what happened there…

Anyway, the tea. I made this one up as a latte using Bluebird’s recipe. It’s the first time I’ve made a green tea latte, so that was kinda exciting! I used 300ml of 80 degree water and 100ml of milk, plus 1/2 tsp each of honey and vanilla essence. I was a little worried about bitterness from brewing at double strength, but it actually turned out fine.

I get the treacle aspect of this one, although it needs to cool a bit before that really comes through. Initially, it’s very smooth, sweet and buttery, but little more than that. Once I found the treacle flavour, though, it was all plain sailing. I should probably say at this point that what I can really taste here is golden syrup; this tea reminds me most of those microwave puddings I had as a child, only minus the sponge. Treacle to me is the black, molasses-y stuff, and that’s not what I can taste here. I don’t think it’s what Bluebird intended me to taste, either, so I think I’m on the right lines.

The sponge is the only aspect that’s slightly lacking. I suppose the buttery flavour approaches that territory, but for me it falls slightly short of actually tasting like sponge. I’m more than happy with the syrup, though; that’s spot-on. I can’t even imagine what’s creating that flavour, because the ingredients seem fairly innocuous in and of themselves. Bluebird magic, clearly!

I like this one, but I still don’t think it’s my favourite of the six. I’ll give it a couple more tries before I make my final decision, though.

Log it in the bug thread, there’s quite a few out there. Something about being stuck in mobile site mode.

Treacle sponge is made with golden treacle rather than black treacle, so probably similar to those microwave puddings you mentioned! (:

What is a treacle sponge? It’s apparently a pudding, but when I first opened the tin, it smelled like a delicious cookie. I wonder if there’s a good way to make sugar cookies and flavor them with this tea.

Anyway, it tastes like delicious cookies, and I also like it with a little vanilla almond milk. I drank it hot. I wish it were part of Bluebird’s permanent collection, but at least I bought a nice 0.15 kg tin of it. My friend recommended it to me, and thanks for that!

I’m still waiting for my Bluebird order, but am also glad for the opportunity to pick up more of this! Doesn’t look like it’s going to win the election, but it had my vote!

Dinner is finished, it’s time to switch to dessert, and since my kettle was already set to “keep warm” at the temperature for green tea, I decided to try this one out, which I got as an extra sampler from tea-sipper inside a treasure trove cupboard sale of discontinued Bluebird teas! Thanks tea-sipper! I /think/ this may be my first dessert blend using a green tea base… My green tea blends tend to be fruity, I don’t think I’ve ever seen one go the “sweet and decadent” route, which makes me extremely curious!

As an American, I have never had this British dessert… I don’t even know what it looks like. So my brain has nothing to connect what flavors or aromas should be associated with the treat, so this should prove to be an interesting experience! To me the dry leaf smells a bit sweet, and I get some hints of caramel and vanilla in the aroma. Brewed up, the aroma is much more pronounced and /very/ pleasant! The tea has a very creamy mouthfeel, and I’m surprised the base is sencha because it reminds me more of a buttery Jin Xuan oolong! It has a very rich, sweet, caramel flavor, but the tea is very light and silky from the green tea base. This tea is delicious and a great dessert tea nightcap!

I’m glad you like this and another appreciator of Bluebird teas. :D

So over here in America, I have no idea what a Treacle Sponge should taste like, but this is a pretty delicious tea. This sure is sweet and if there is butter involved in the dessert, a buttery sencha green base is perfect. I’m not sure how the cocoa shells, cinnamon and aniseed came into the blend… they are a lovely idea for the blend but I think I was mostly tasting the flavoring on the green tea. There is a TON of flavor here, even on the second steep. And I haven’t tasted this flavor with any other tea before. So I’m not sure I had to use 1 1/2 teaspoons to create such a tasty cup.
Steep #1 // 1 1/2 teaspoons for a full mug// 30 minutes after boiling // 3 minute steep
Steep #2 // 25 minutes after boiling // 3 minute steep

The name of this sounds really tasty. I’m envisioning a decadently sweet sponge cake (I didn’t look up what treacle is).

Yeah, probably the only treacle related thing I will ever have is this tea.

Treacle Sponge is the smell of nostalgia! Anyone else remember those sticky toffee puddings that came in a tin? That’s what this tea smells like to me! I remember my mom would make them with custard, as an after-dinner treat. For anyone who didn’t get this wonderful experience as a child, you can now experience it in liquid form. It shouldn’t be a surprise that this tea smells sweet, cakey and treacle-y. And the flavour? A punch of vanilla, slight green tea notes and a lingering cake-like finish. It smells great and tastes great, but it also looks beautiful. It’s like a mini firework of tea. It actually turned out to be my favourite of the collection.

For more on tea: www.Tastethetea.co.uk