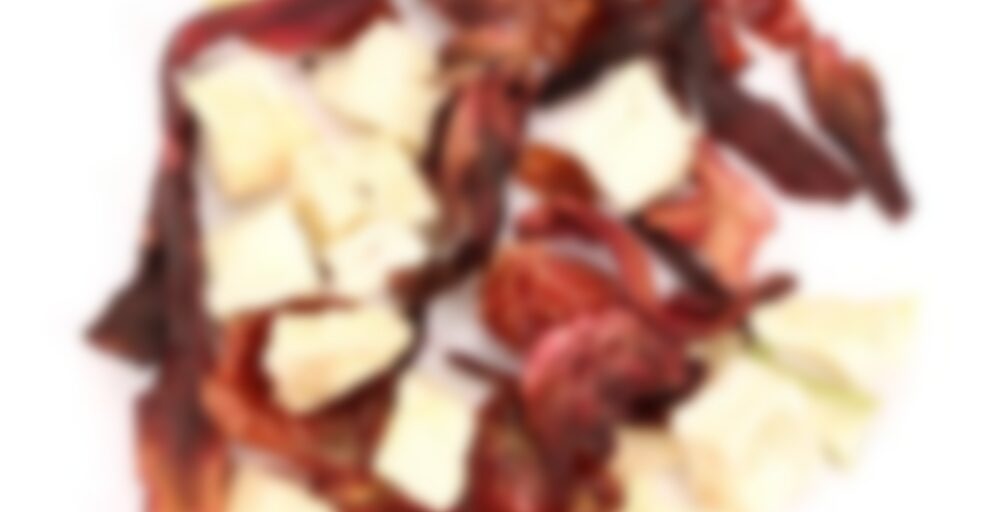 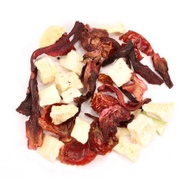 A delicious blend of natural fruits and spices that brews up a mouthwatering cup of herbal tea. Entirely caffeine free, it holds a special appeal for kids and sweet-toothed adults. Yet contains no sugar or other sweeteners. The flavor is all natural, emanating from apple pieces, hibiscus flowers, cranberries and raspberries. Highly addictive; Please proceed with caution!

Light and sweet. First you get the sweetness of the apple and a hint of the raspberry. Then as the pink liquor travels back on your tongue you get more of the sour/bitter flavors of the cranberry and the hibiscus. This seems like a tea I would really like, except I can’t quite seem to get the preparation down. My first cup was too light, not enough flavor, so maybe I needed to add more tea and steep for longer. The second cup (that I had left steeping) had a much more powerful flavor but a little on the bitter side. It would probably help if I had a proper kettle so I knew what temp my water is.

You could try getting one of those dinky little cooking thermometers that you can find in the grocery stores.

I feel like one of those variable temperature kettles would be good because right now I use a super old and crappy one. What do you use/recommend?

I know you’re not asking me, but I’m gonna be a buttinski anyway. I use the Utilitea from Adagio, and it’s pretty fantastic, though I sometimes find myself wishing for something more more precise.
http://is.gd/3OQDv

But if I were in the market I’d probably get this one.
http://is.gd/3OR1V

And continue to lust after this one.
http://is.gd/3ORbZ

@takgoti: yea that last one looks amazing, I’ve even tweeted about it before. The utilitea is more in my price range but I would like something that has fairly precise temp control. Hmm, so many decisions…

The Utilitea is good enough temp-wise, and you can’t beat the price!

I picked up one recently at Upton Tea Imports and I adore it. It has four temperature settings and it heats a full kettle of water to 212 degrees in three minutes flat (I timed it). Plus it is on sale, so I got it for $42.88. Here’s the link:

Just wanted to say that I lust after the Bugatti as well. If only I could afford to spend that kind of money on a tea kettle.

Don’t bother w/ the UtiliTEA, it’s SO much more inferior than the Breville. Sure it’s cheap, but that’s because it doesn’t have all the features to make the perfect cup of tea. Why waste any amount of money on something that doesn’t work the way it should?

What’s so special about the Bugatti? the Breville is perfect for 1/2 the price.

I was wrong. Never mind w/ the Breville either. This has WAY more settings and is a heck of a lot cheaper. I’m getting this ASAP.

Wow, so many great choices. I have some research to do.

What the heck is it w/ Adagio’s fruit teas? Why do they insist that fruit teas need to be flavored w/ other fruit?. If I order raspberry, I want raspberry. If I order sour apple, I want sour apple.

Funny thing is, this is a free sample from adagio. I would have never looked to purchase it. And, surprise twist, my boyfriend loves it!
I’m not a hibiscus person, but he got one wiff of the bag and was immediately like ‘I want that’.
And I am not a person who will deny a man his tea.

This one is actually a more tolerable blend with hibiscus.

Additional notes: Iced edition! This one is lovely iced. The sweetness of the apple cuts the tartness of the barely there hibiscus even more. The cran/raspberry gives it a fruit punch like quality.. especially if I add a tiny bit of sugar to it! I’m going to be experimenting with tons of teas for iced teas…

Pretty sure this is the last fruit mix in my herbal sampler. I think the only sample left after this is lemongrass. It’s pretty much indistinguishable from the other mixes in what it looks like dry, but it does have a rather distinctive sweet, berry smell to the dry mix.

It steeps to the dark magenta I associate with hibiscus. It’s aroma is not strong, and not very distinctive. Apple may be the main component, with some hibiscus earthiness.

It’s tart, but not too tart and it has a countervailing sweetness that must be from the apples and berries. My main complaint with it is that I expected a stronger raspberry flavor given the name.

There is a little raspberry, most noticeable in the aftertaste, but it isn’t nearly as strong as I’d want in a mix that has raspberry in the name. Though this has a pleasant taste, it’s not very distinctive, and I wouldn’t say it’s better than the first two fruit mixes in the sampler. It also doesn’t surpass the Blood Orange, which I found disappointing for essentially the same reason — not enough orange. This has an even bigger not enough raspberry problem, so I can’t rate it as high as the Blood Orange.

So somehow I got all caught up on my reading and homework about an hour early today. O.O It is a strange feeling! So I’m spending my time figuring out what to do about needing 2 new tires. Yay for car registration time! (jk it is awful).
So this tea is very flavorful, cheap, fruity, and basically awesome for people like me who like tartness in their cuppa. It is perfect for easy steeping and nearly impossible to get wrong. I need to make iced tea with the last serving of it. I would suggest this for people who share tea with non-tea people, simplicity seekers, and people who, like me, love herbals.

Have I never written a tasting note for this? Weird. Well, SIPDOWN anyway. Working to clear out some of these work teas. I had enough for a full pot of this so I’m drinking this this morning. I have another cup in the pot ready to be drunk too, though I’ll have to reheat it. My lead engineer asked for some too. He doesn’t add sugar to it. I guess he just likes hibiscus.

This is a bit too much hibiscus for my tastebuds. It’s very tart. The colour is a nice bright red and the hibiscus and rose hips are very present and I can just about taste the raspberry but it’s not like the raspberry in, say, 52teas raspberry and cream, just a very berry herbal tea. I don’t love it, but it is tolerable when sweetened. And at any rate, this is the last of it and I shall not be getting more!

Have you ever watched one of those videos where an adult gives a baby a taste of lemon, and the baby’s face contorts at the unexpected tartness? I’m sure that’s how my face looked when I first sipped this tea. Even after adding sugar the tartness was overwhelming. Me thinks this is not the tea for me.

Thanks darby for this tea! Oh wow! This tea is so tarty and I love it! Raspberry tart – almost like sour candy. I really don’t find the tart to be a negative aspect at all, but then again I love sour candy! With a little pinch of sugar, it’s still super tart but the other fruit flavors comes through and the whole cup blends together very nicely. This is not at all what I was expecting from this tea – I love the surprising characteristics here. And it’s a beautiful dark pink color too which I adore.

I’m wishing I had some of those shockers candies I used to love when I was younger to go with this tea. It’s been so long since I thought about them…I think I’ll go and get some tomorrow =)

Wow, the scent of this one is so strong. Incredibly strong. And it’s such a deep red colour.

This tea is really tart but I’m enjoying that. It’s so tart it’s borderline candy raspberry-ish. Or not quite ripe raspberry-ish perhaps. To be quite honest it tastes more like a juice chilled than a tea.

I did a resteep of the leaves to see if I enjoy it hot.

Okay the resteep was alright. It lost quite a bit of the flavour unfortunately. I drank half my resteep hot and put the rest in the fridge for after work.

One downside I will give this tea is that if I have a large glass of it and don’t steep it forever it’s almost TOO light. But usually if I have boiling water and I wait it out it’s poifect.