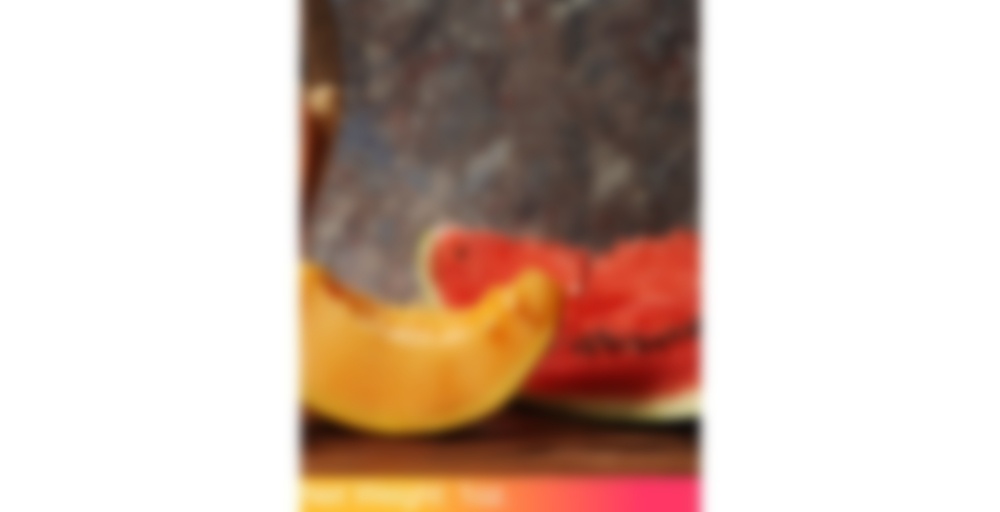 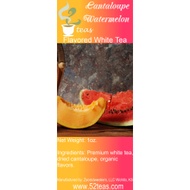 Description: Cantaloupe is one of my all-time favorite fruits and so is watermelon, so when I had the chance, I just couldn’t resist creating this blend of premium white teas, dried cantaloupe, and organic cantaloupe and watermelon flavors. This is a serious glass of refreshment as an iced tea and I’m sure it’s awesome as a hot tea too. I’m already getting a little anxious for spring. I’ve got this week’s tea and next week’s tea already blended up, and they are both on the fruity end of the spectrum. But that’s all I can tell you for now.
Our Tea of the Week for the Week of January 20, 2014
Ingredients: Premium white tea, dried cantaloupe, organic flavors

Hm. Much better hot than cold, this is very cantaloupe-y with less watermelon than I’d expected in the mix. Also, was a bit disappointed to see this was a 1 oz. bag, when it’s the same price as the 2oz. bags in the same order. Yes, I realize white tea takes up more space – however I also need more of it to brew, and if I’d known it was double the price, I likely would have passed. My bad for ignoring this important aspect of buying.

Really though, it’s a very authentic cantaloupe, even if it gets a bit metallic as it cools. Watermelon comes in a bit at the end of the sip.

I feel somewhat special, I’m the second one to post something for this tea! Im super excited that I finally got some new teas to try. I felt deprived on all the teas that I have. I opened this package and oh my it smells freaking amazing, Hello Child Hood! The package filled my nose that resembles fresh cut Cantaloupe! The white tea is definitely good quality as well. The taste of the cantaloupe and white tea is beautiful, it is almost as it gives the texture of a cantaloupe!

I used one scoop (I use David’s tea Perfect Spoon) in a 14 oz mug and I also used a bit of German rock sugar, then steeped about 3 minutes to maybe 4 minutes.

Resteep:
500ml at 175°F for 3 minutes 30 seconds
very dark orange brown
a little bitter, but a nice white with hints of fruit still

I took this tea to work with me tonight, and sipped it while I poured pints for other people, which was weird but infinitely better than working without tea. I had been telling some of my coworkers about my tea habit during the week and they actually asked me to bring something in, so I opted for this since I had plenty to go around and the water from the espresso machine (the only source of hot water – no kettle) is around the right temperature for white teas. One coworker pronounced it ‘alright’ and the other ‘fruity’, so I’m not entirely sure it was a success, but I think it went better than they expected. I’ve been requested to bring in a chocolate tea next.

I think the water was a little on the hot side, but the tea did admirably considering the less than ideal brewing conditions. The base tea is strong for a white and only a little astringent, and the flavouring quite natural tasting. It’s very juicy and I can taste the cantaloupe clearly alongside the white tea, and the aroma is dead on too. It’s a shame I don’t like cantaloupe! I don’t get watermelon at all, in the scent or the flavour. I’ve thought this every time I drink this tea, but in my opinion watermelon just isn’t a strong enough flavour to translate to tea well. Maybe if it was paired with a more delicate base tea, and wasn’t competing with the cantaloupe flavouring, but it’s just overwhelmed and the name of the tea feels misleading. Butiki’s Watermelon Xylophone did it well, but other than that I really struggle to think of a good watermelon tea which has been strongly reminiscent of the flavour of a watermelon. All of this sounds really negative, but despite everything I’ve just said I always enjoy drinking this tea. It’s not overly complex and while it isn’t exactly mind-blowing it just goes down so easy. Not a bad choice for a workplace tea.

This tea is always super yummy! I feel like it makes a good breakfast tea because melon always reminds me of brunch. The flavors are spot on and the white tea base adds a nice sweet note.

Pumpkin Cream from Mahamosa has honeydew melon in it and it is delightful.

Another from the grab bags! I wasn’t too happy about the watermelon, but I wanted some of this one to try anyway… turns out I could probably drink this on any hot day! Luckily for me, this one doesn’t taste like watermelon, but plenty of cantaloupe! It tastes like the Butiki cantaloupe tea… but there is so much cantaloupe that I can’t even taste the white tea. I was craving white tea today. I’m happy with this one: oodles of cantaloupe, no watermelon. Drinking the second cup, I was LOVING the flavor in this one on a hot day and more of the white tea made itself known: fruity, juicy, a burst of flavor. This is GOOD. I’ve only seen cantaloupe with white tea and that is the way it should be.
Steep #1 // 32 min after boiling // 45 seconds
Steep #2 // 32 min after boiling // 2 min

White teas in general seem to be growing on me, but I really gravitate towards flavored white teas lately. Any recommendations?

But anyways. This was the only tea I tried from the HHTTB R3 that I wanted to keep. I’m still surprised how much I like melon teas. This one I don’t get a ton of watermelon in this tea, the cantaloupe seems to be the dominant flavor here. It’s definitely sharper than the butiki cantaloupe and cream, which is much smoother. But I downed this cup quite quickly, which is a sure sign I like it a lot.

I can send you a sample! I hit return too quickly.

oh wow, that does sound fantastic! I would love to try it!

Shoot me your addy.

I cold brewed the rest of what I had left in a 2 qt mason jar. It was ok, I enjoyed the cantaloupe flavor but I did not notice any watermelon. I’m so sick of iced to tea right now that I’m sure that is influencing how I feel about this tea today.

Tea #3 from Another Traveling Tea Box R2
This tea kinda almost makes up for the rest of the box being a flop for me. It’s pretty dang good. (Which surprised me really)
When I popped open the package I was like ‘Cantaloupe? Really?’ /intent stare/ It actually reminded me strongly of Butiki’s Cantaloupe & Cream with the smell. I hadn’t been too thrilled with that one since it was early on in my tea experimenting stage, so I passed it on fairly quickly.
Since I’m still not too big on white teas, I figured I might as well give this a shot since it’s here and all.
Kinda faked it on brewing parameters since there’s nothing official that I could find. But I think I managed to get a decent brew from it.
The scent of the brew was strongly juicy cantaloupe, though I didn’t find much watermelon in it.
Taste wise, the unsweetened brew is very cantaloupe, but with some truvia this tea really hits the mark. Sweet, juicy and divine. I swear it’s like drinking just straight cantaloupe juice. I still am not getting much of any sort of watermelon, but maybe that’s just how the measure of the leaves turned out. It’s a definite departure from my usual malty’/heavy’ sort of teas that I’ve been drinking lately, but in a good way.
I wonder if this would be as good iced as it is hot. /ponders/ I wish 52Teas still had this for sale. Lol.

This morning, I read Marzipan’s tealog on this tea and thought, “wow, that tea sounds really good. I’ll have to try that someday.” And I bet you can’t guess how excited I was when I pulled this tea out of the box…eeep!:D

I taste the juicy cantaloupe, but the watermelon flavor alludes me. I don’t mind so much as the cantaloupe is sweet and fruity. Very fresh and springy! As the tea cools, it appears to lose a bit of its flavor, better hot than warm in my opinion.