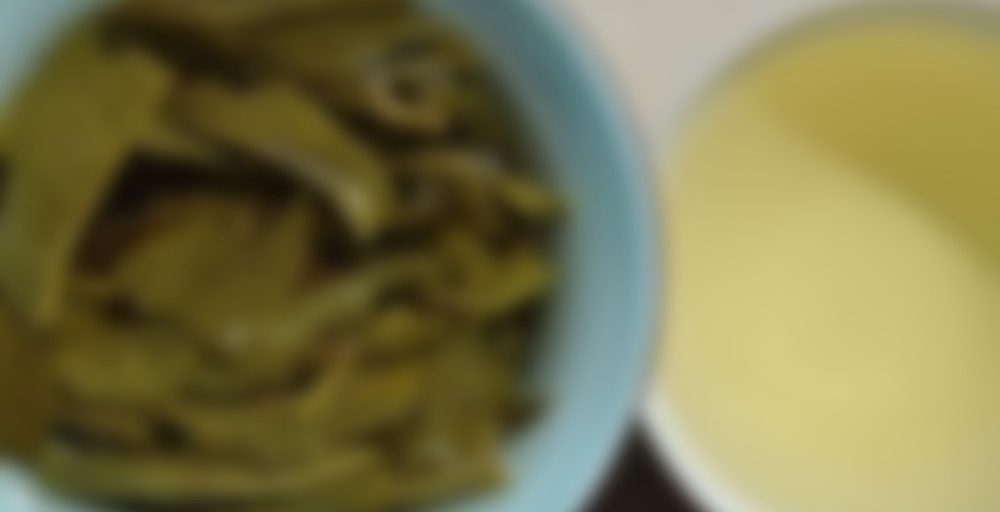 Aromatic Needle is a type of high fired hand-processed green tea. After picking the leaves are carefully transported to the processing room and pressed by hand into a dry wok in small batches, firing time is short but temperature is high. Skill is needed to accomplish a good result. The tea liquor is very green and light! The taste is penetrating and carries hints of toasted peas and pine needles with a stimulating mouth-feel.

A great deal right now on Yunnan Sourcing’s China website. I purchased 100 grams of this last month, along with a number of tea ware and puerh items that were on my wish list… Such wonderful natural flavor. I am a big fan of Autumn pickings, that are often more robust and filled with stimulating energy.

The hand processed needle like tea leaves unfurl gently and yield a cup of light amber/green tea that has a distinctive aroma not unlike some dragonwell (long jing) teas that I have enjoyed, but the flavor is more robust. Nutty, toasty and very pleasant. A real winner here for a bargain price.

Yunnan Province in China has a reputation as being THE place to find premium teas. Tea cultivation in this area dates back thousands of years. In fact, it is purported to be the birthplace of tea. One of the more intriquing aspects of Yunnan tea is the diversity of tea bush varieties that grow there as well as the number of old tea trees and old gardens that thrive in the mountains. Yunnan teas really define the notion of terroir as there are many particulars that contribute to their flavour and style characteristics. When it comes to dark teas – and, even some blacks – Yunnan pumps out some of China’s best.

So it was with some surprise I learned green teas were coming out of this area.

A short search online threw up a handful of impressions about green tea production in Yunnan…
◾In general they aren’t particularly high quality.
◾The price is often suspiciously low. (Yet, that’s not indicative of a quality tea.)
◾The teas are often heavily roasted, creating a tea that is more aromatic.

As a rule, needle shape teas are difficult to process. The fresh leaf must be quite long in order for it to have shrunk to this the long needle size and shape during the firing.

This particular tea from Yunnan Sourcing is made near Simao from large leaves that are rolled into a needle shape (Xiang Zhen in Chinese) and roasted at high temperature for a short time. This typically helps to impart a strong scent. And it does. The dry leaf is highly aromatic, with standout notes of cooked fruit (peach or apricot) and snow peas.

Time for some infusing!

As with most green teas, the leaves needed to be treated with care. A gaiwan was used and water heated to 80 degrees as per the vendor’s instructions. The leaves had a bluish-green hue, which changed on contact with hot water, to light green. After an infusion time of 1.5 minutes, the liquor looked a clear light yellow-green. However, the taste was slightly on the bitter side. For the second infusion, the temperature was wound down 10 degrees. The result? The flavour was full, rich and distinctively fruity with a backbone that is reminiscent of chestnut and snow peas with a slight mineral note at the finish. It possesses a very nice sweetness without any bitter notes. It reminded me a little of Rizhao Xuequing (Snow Sunshine) from Shandong Province, but fruitier. Overall impression? The aroma is by far the outstanding feature of the tea, but it still rates as a reasonable cuppa. However, it not a particularly forgiving leaf when it comes to brewing. Measurement is critical: use too much and it will be bitter, use too little and it will not seem particularly interesting. The water must be well off the boil, similar to the temperature for a Japanese green tea, but not too cool or the flavour will hide inside the leaf until the third steeping (which you may not even infuse!). In saying that, with a price tag of US$5 for 100g, one can’t really complain.

Nice, I love Rizhao, if I want a cheap green I may try this sometime.