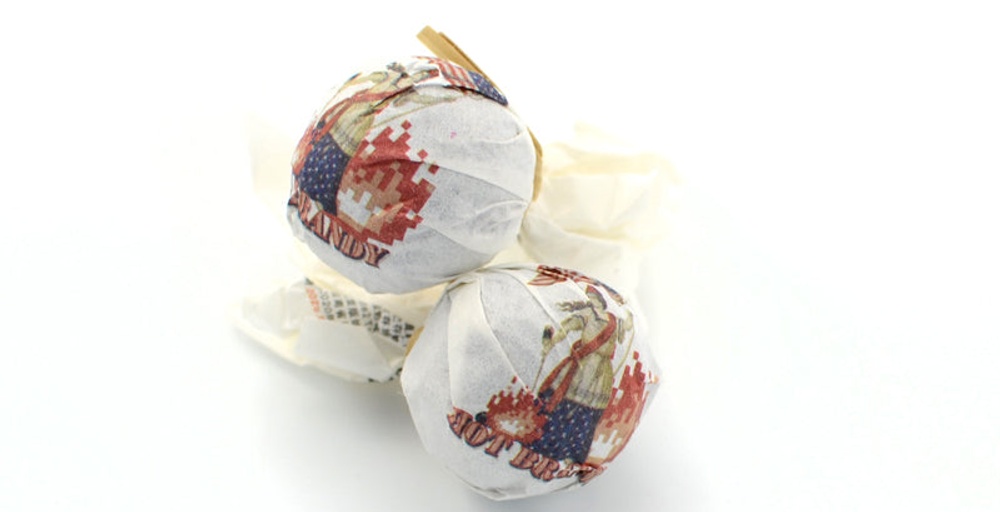 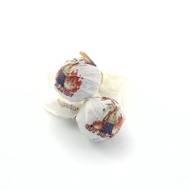 A blend of both white and black tea experiment gone horribly right, this is the latest version of our sold out 2016 Hot Brandy.

The soup is thick, smooth, and fragrant. It fares well with both gongfu style and western style brewing. The tea has excellent endurance and can steep for a very long time and can even withstand being simmered or boiled without becoming acrid.

Pressed into a convenient 7g ball, this is perfect for thermos brewing.

So I figured I should probably get cracking on some of these white2tea minis… Not that I’m in a hurry to sip them down or anything, but I haven’t tried a single one and they’re sitting on my tea counter in categorized bags, just staring at me. O.O

I kind of struggled with steeping this though. I originally used my lazy glass steeper thing from Rishi, which is what I usually do for casual gongfu at my desk. But it has a bit of a wide circumference, which didn’t work as well for a spherical tea since it requires more water to be added to submerge it. After that I switched to a baby glass teapot which worked better for the tea:water ratio. But the tea was still tasting quite mild to me, even with longer steeps, and the orb wasn’t really unfurling at all.

So then I switched it up, to grandpa style in a glass tumbler. Still sipping on that now, but the little ball still isn’t unfurling much, even though it’s probably been 30 minutes or so. The tea is tasty though – soft and mellow with a nice honey-brown sugar sweetness to it, and with some maltiness from the black tea alongside lighter hay notes from the white tea. I don’t think I’ve ever had brandy, but this does have some woodiness to it that would make sense for a cask-aged liquor, plus the sweet notes.

Anyway, I have quite a few of these little ball-shaped minis to try, so I would love some advice on how best to steep them. Is grandpa-style better since they take so long to unfurl, or should I do a long first rinse/steep to try to open them up a bit? Let me know what your experience has been! :3

#tiffanys2021sipdown Tea #204 overall / Tea #28 for May
Monday 5/17 - white2tea 2020 hot brandy mini. From Nazanin's (teathoughts) Valentine’s Day Tea Countdown Theme Box. Brewed this many times in my gaiwan with hot water dumping each infusion into my DT pitcher then after pitcher was halfway full added cold water and leaves to strainer and cold brewed entire thing. Finished up the pitcher. It was fine, was just something to sip during the busy work life I lead. I have picked up another 3-4 of these in some white2tea orders this/last year so I’ll be curious how this turns out with more sipping/experimenting.
#tiffanydrinkstea #tiffanys2021 #tiffanysfaves #tiffanyinthe614 #tiffanysteasipdown

Hot Brandy is interesting. I’m still relatively new to gongfu-ing teas and in my head white teas are delicate and light like silver needle steeped western style and blacks are all sort of English Breakfast-y. Combining those two things sounded weird and not especially pleasant to me but I added one Hot Brandy mini to my order because it was cheap and other teas that didn’t sound great to me have been surprisingly delicious. Hot Brandy is more like aged pressed whites that start tasting a bit like black tea. There are sweet and fruity flavors like I’ve come to expect from shou mei or moonlight whites and then there’s that thick and creamy, feels-like-you-could-chew-it mouthfeel I’ve noticed in fancier black teas like gold needle. It seemed like earlier steeps tasted more like white tea and as it went on the black tea flavor got stronger. At one point I thought I could taste cherry…that reminded me I need to re-order more of that aged dahongpao I thought tasted like dark chocolate covered cherries. Toward the end I wasn’t getting that thick tongue-coating feeling anymore and the flavor weakened into lighter somewhat fruity black tea. It was nice. I don’t know that it’s amazing enough to order in bulk but I’d drink it again without any complaints and might even sneak another ball or two into a future order.

I’ve never done any gongfu-ing, but this sounds like an interesting experiment.

Sweet and cozy with a lot of autumnal leave notes as a nice stonefruit/peach jam kind of top note that I fucking love about this tea. I really do think this is miles better than any other previous years’ production of Hot Brandy – and I think it might be my favourite go to “mini”/dragonball to brew up from anything that was produced in 2020. I actually wish I’d gotten to drink more of it on the day I made it in office, but I started it later in the afternoon than I probably should have. By the time 5PM came around, the tea wasn’t close to being brewed out – but I didn’t want to stay later just to steep out the tea and I wasn’t going to be back at the office for two days so I also didn’t want to try and keep the leaf. A little regrettable, in that regard…

Fun fact: I took this photo on my walk from the metro into the office in the morning. It’s from a flower pot outside of a card dealership I walk by, and I stopped and unwrapped the dragonball to snap pics because I was captivated by the colour of the flowers. As I was wrapping up, I looked up and an employee from the car dealership was just starring at me. Just instagram things, I guess…