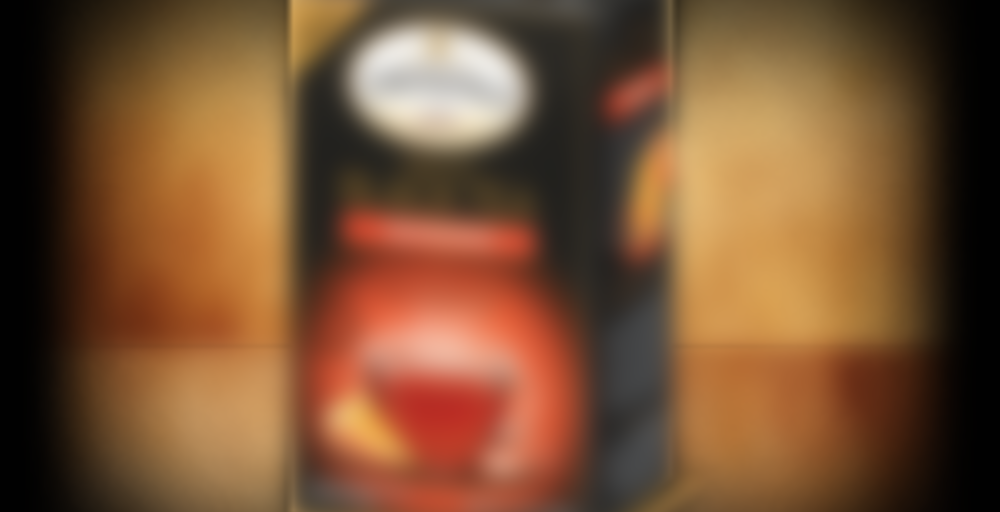 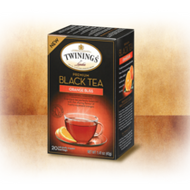 Fine black tea expertly blended with the alluring flavour of freshly-squeezed oranges to deliver a delightful tea with a sweet aroma and fresh citrus taste.

I have no memory of where I got this teabag. There are only two places I can think of – the most likely being that one of my students brought this to me from her trip to Disney long ago. The other possibility is that daughter’s BF sent it from Ireland, but I don’t think so. This has been hiding somewhere but turned up yesterday in all the turmoil.

You see, dear hubby who can do ANYTHING! ANYTHING I TELL YOU! is moving our washer and dryer for greater convenience for me. But as happens, it was discovered that the wall where the washer used to be was wet from seepage and the sheetrock had to be replaced. This resulted in two extra trips to the hardware store and lots of extra time for poor hubby and the water had to stay shut off periodically so he could run new water lunes and I couldn’t have tea and since we were pulling things out we found tons of things, including this tea. Phew!

(Oddly, I also found a three page “handy hints” email that my late mom printed up for me over a decade ago, and I saw the identical list on Pinterest today. Weird.)

Now this teabag is probably no spring chicken, but I am horrified at how much tea I have now that I had to move it all around so I am drinking up such things as I can. I steeped it for three minutes in just less than boiling water. Wow, this is dark!

But you know what? The tea really tastes like hearty tea blend and the orange flavor is really authentic, including the juicy orange aroma plus that slight bitter smell you get from the white membrane. This really tastes like I just squeezed an orange over my cup. Since the base is a little stronger than I usually drink, I added a wee bit of sugar and had a nice cuppa. I also got rid of one teabag without guilt. Now I only have about twenty teas to go…

I’ve never even heard of this one. I’ll have to check the local market for this one – gives me yet one more excuse to walk the tea aisle :)

I think there is an area at Disney with food from many different countries. The British section had a basket full of different types of Twinings and she picked a handful to bring back to me. I think I saw it at either A Southern Season or Christmas Tree Shops once.

They have it on Amazon. I’m pretty sure I’ll find in the nearby college town. Twinings is good stuff on the relative cheap.

I love a good orange and black tea. I’ve found Twinings disappointing over the years, but I’ll hunt this one down.

This smells like those soft candy orange slices that are all covered in sugar I used to eat. I love those. Haven’t seen them in years. Now I want some. Only thing wrong with this is I wish the base was a little more memorable. I would like this to have more bite. It is a very smooth cup and I would drink a whole box of this. Put the Ceylon base Ahmad uses with the orange flavor and I would drink it often.

Love candy orange slices (my mom made cookies with chunks of those cut up and stirred in), but not as much as the candy fruit slices that are soft on the inside but had a little chewy/gummy rind.

yeah the gummy rind ones! That’s what I’m talking about. Love them.

They are REALLY hard to find; hubby brought home some mini-sized ones from WalMart a couple of Christmases ago, but they weren’t quite the same. Sunkist Fruit Gems (Cracker Barrel carries) are the closest substitute I’ve found. No rind, though.

Afternoon tea time with a cup of this and a slice of orange cranberry bread. The weather has turned cold and rainy, and I’m thankful to be inside with a warm cup of tea. It’s almost that time of the year to start using the fireplace!

I’ll admit that I wasn’t expecting much out of this tea. Even when I opened the wrapper, I was about knocked over by the overwhelmingly strong, artificial orange scent. The tea itself had a malty aroma with a hint of juicy orange – much better! The flavor was a nice black tea base with a sweet orange finish. There is a fresh, juicy orange aftertaste that is dead-on with a glass of fresh squeezed orange juice. We went to the fair last weekend and had fresh orangeade, and this tea reminds me very much of that. It’s perfect with a little milk and sweetener. I am definitely going to check the next time I’m at the grocery store to see if they have some of this. It would be wonderful for a breakfast tea, and I’d love to surprise my fiancee with some of this since he loved the orangeade at the fair so much!

I am fairly sure A Southern Season has it, but if you don’t find it I can have my girls pick it up in London next week! :)

Oh, and if you have Christmas Tree Shops near you, they get a lot of Twinings and other UK teas that are hard to find here.

Thank you, Ashmanra! We have so many stores around us, I am sure that one of them has it. The Lowe’s Foods near us actually has a very good selection of Twinings from what I remember. I am hoping to visit A Southern Season soon, so I can check there too. :)

sounds yummy! I need to finally visit A Southern Season one of these days too (but not until I’ve drank down more tea!)

Definitely don’t go until you’re in need of lots of new teas – I always buy way too much every time I go. Love Southern Season!

So I got this as a free sample in my package of Lady Grey so I thought I might as well try it out. Not knowing what to expect I steeped it for about 3 mins which turned about to be fine. When it was done steeping it smelled quite a bit like orange flavoured children’s Sudafed. It tasted like the smell (do you know what I’m talking about?)but with black tea as well. It was an okay I guess, I just prefer my teas to be delicate instead of a power punch so you can enjoy the subtleties a bit more. Summary: Not bad, wouldn’t want to own it though.

Not very memorable. Too orange-y and not enough tea. Would not buy again.

Once again, it is time for purse sample teabag day!

I was not expecting it to stay cool and overcast today, so the large jug of iced tea I cold brewed the night before was just not doing it for me. I pulled this one out on a whim and brewed it up.
The black tea base is so nonexistent it makes me so sad. I do get some astringency in this brew. The orange is a very familiar orange. Think orange hard candy, not the fruit. 5 or 6 years ago, I would have gone grapenuts for this tea. I used to love the combination of orange and black tea. I think I still would if it was a better tea with natural citrus/raisin/cocoa notes, and a better flavoring.

Bought a box of this at the supermarket in town. I was in the mood for a good black tea and an orange flavor,so it was either get some Earl Grey,or Mandarin Orange. But when I saw this;I knew to get it immediately. I brewed a cup with 2 teaspoons of sugar and let it sit for 3 minutes or so,it was really good and i’m looking forward to buying more!