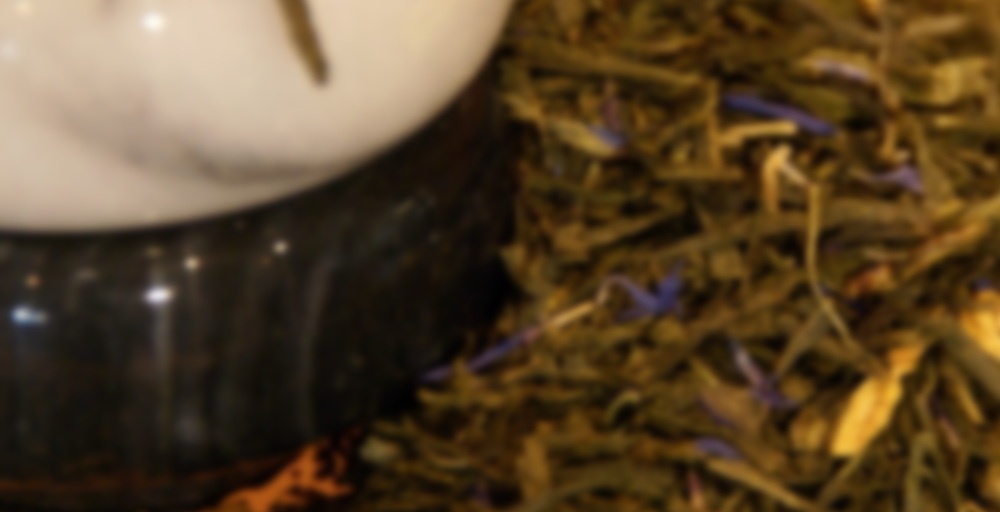 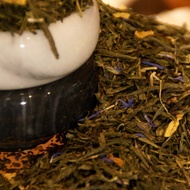 by The Spice & Tea Exchange
79
You

A blend of fine Japanese Sencha and Chinese Dragonwell tea is combined with wild strawberry and rhubarb, to create a very fragrant and luxurious tea. This refreshing combination is also great as an iced tea

This is a pleasant fruit green tea. It’s mostly green with just subtle hints of strawberry and rhubarb. Normally I’m not into subtle, but this one works for me. The green base isn’t too grassy or too floral, it’s well balance and then just a hint of fruit. I get more strawberry than rhubarb but there is some tart that hints of rhubarb.
All in all, this was a really nice tea – I’m sure it would be really good iced.
Thank you for sending me this lovely tea Stephanie.

Glad you enjoyed! And it IS really nice as an iced tea. I picked that one up in New Orleans last summer! :D

I picked up 3 teas at The Spice and Tea Exchange on vacation last week. Decided to ice this one up…oh man is it good! The green teas are of decent quality, and the mallow flavor really comes through. I do not get a ton of strawberry flavor from this one, but what I do get is relatively natural and not at all fakey like some flavored teas. I am looking forward to trying my other 2 selections from the Spice and Tea Exchange! :D

How was vacation, Stephanie? :)

Oh man, it was so great! Thanks for asking :)
We had a ton of really great food, heard some excellent jazz, walked around a lot and everything was so beautiful!

That sure nicely sounds like the ideal New Orleans of the travel channels. :) Glad you had some good time off!

I eyed this one when I stopped by their store in Gatlinburg. Going to have to try it next time.
Glad you had a lovely time!

This is another one that Wombatgirl sent to me. It’s one of those things that I didn’t even know that I was interested in trying until I actually had it in my hand. But now that I do, I’m very very curious!

I like strawberries in tea (and otherwise), I liked the rhubarb sencha I had once from TeaEqualsBliss (I think) and the Dragonwell/Sencha combination is really very interesting, but not one I had even considered for a moment before.

I only had enough leaf for one pot, so I used all of them in my small favourite farm animals pot. I forgot to smell the dry leaves, though, but after steeping it smells very Dragonwell-y. There is that cat breath note that is fairly easy to find. It’s very sweet too in a kind of creamy way, so I’m guessing that must be due to the strawberries and mallow flowers. The rhubarb is coming through with a sharp stap of acid. Very rhubarb-like.

It has a funny multi-layered flavour. For a flavoured tea blend, I’m not sure how well I think they got away with it when I’m getting the flavours one at the time with clear distinctions in between. First, strawberry and Dragonwell. Then sharp rhubarb tangyness. Last a sencha finish.

If this had been a more fluently developing flavour it would have been awesome, but it doesn’t really flow for me like that. Still, I’m very pleasantly surprised by this one. Had the flavour been more rounded off and fluent, I’d have given it a few more points and I’m still not sure I’d have wanted to own it in larger quantities, but it was definitely intersting to try it and a pleasant cup.

But I have a problem with tea.

9 times out of 10, the tea always smells 10 million times than the brewed tea tastes. And no matter that I know this, and keep reminding myself of this, I always get my expectations up when I smell a tea blend that smells really wonderful.

Because they don’t live up to the smell.

This tea did just that. It smelled amazing. And it tasted like a nice green tea with a tiny overtone of wild strawberry. Meh.

I only meant to go downtown to pick up a paycheck today…but I ended up veering off course and entering The Spice and Tea Exchange. It was relatively new. I did some background digging on their teas prior. None really stood out at first, but then I went in to smell ’em. The Mystic Dragon grabbed my attention for smelling exactly like an Orange Julius smoothie. Not a sophisticated comparison, I know…but an apt one.

Taste-wise, both green teas (the Japanese and Chinese) blend quite perfectly. The berry lean showed up in the middle, but not overpoweringly so. The round-out was quite floral. Subdued, slightly subtle, but sating.

That’s why companies let ya do it…so that your olfactory senses override your common sense.

Not all companies let you do it. I get strange looks when I ask If I can smell the tea first.

That’s when you ask if they have a “fitting” room.

I don’t understand why some places don’t, though. It’s such a poor sales strategy. The people at my tea shop practically try to shove you into their bulk jars. They always sell something to anyone who smells anything!
Hmm…But then I suppose it could be a sanitation issue. Like if someone dropped their retainer in a jar and they wound up tossing out $80 in tea…

So this was a tea that I bought while I was in Florida. One of my favourite! A nice green with subtle hints of strawberry :)
Definitely don’t have enough for a decend cuppa though. I have like 1.5g left soooo yeah. Probably the smallest cup of tea tonight ahhaha.
Just something nice and calm after having Sherlock’s Experiment!

((and I don’t even know why, but I’m going through a One Direction craze. Their song came up on Pandora one day and I was like huh. Maybe I have this song? AND I LOOKED IN ITUNES AND I FREAKIN HAVE EVERY ALBUM, THE FREAKIN DELUXE EDITION AND I’M ALL WHEN DID THAT HAPPEN??!?!?! But yeah One Direction. I’m not a fan, but I do appreciate and enjoy their music :) I especially love the ones that Mcfly wrote for them because… reasons))

I totally hear you about the One Direction craze. I just think they’re music is so… fun? And I have an appreciation for good pop music (plus people talk a lot of crap about them and just, ugh, I hate when people hate on things because they’re popular and liked by teenage girls.) But yeah, my friends are hardcore into the 1D fandom so I tried to be involved in it the only way I know how: by making themed blends for them covers face http://www.adagio.com/signature_blend/group.html?group=4873

Oh gosh. I do have friends who are hardcore 1D fans! I appreciate them. I don’t consider myself a fan though. I appreciate their music, but I wouldn’t go out of my way to a concert of theirs. They were at the mall by my house over the summer and even though I could easily drive there, ehh I ended up spending the day in my pjs haha.
But dude. I definitely tried making blends and whatnot, but I just can’t art so I gave up! BUT BLENDS FOR ANYTHING AND EVERYTHING. AWW YISS.

I know what you mean about not being able to art. I finally just bit the bullet and accepted that my teas are going to be more D- in 10th grade art class rather than masterpiece, haha. But since I’ve started making them I want to make them for EVERYTHING.

A lovely blend of Asian greens with strawberry and Rhubarb plus an unexpected addition of the Mallow flower, which I didn’t know about until I tried this tea. The dry smell of the tea is sweet and relaxing. It’s quite a smooth tea with the plant, berry, and flower combo. One must be careful to not let it over steep or the green tea will overpower the rest and as usual become bitter.

The dry leaves smell mostly floral to me, with a touch of fruitiness. The colors are very pretty, the green leaves with the blue and yellow flower petals. The leaves aren’t entirely whole, however, but I’ve had this tea for a while and it went through some travel. I’ve never had dragonwell or sencha tea just plain (yet), so I can’t say much as to the quality of the green tea. It tastes natural, however, although it says there is strawberry and rhubarb flavorings in it. (Note: I used 0.5 tsp to 4 oz water ratio for this brew.)

The tea came out yellow-green, more on the yellow side of the spectrum. It’s a much lighter flavor than you might expect from the scent of the dry leaves, but I still enjoy it. The strawberry flavor comes out more strongly in the brew than what I could discern by scent in the tea leaves. If you could call a tantalizing hint as ‘strong’. (Although perhaps that is my own inexperience at smelling tea leaves at work and matching flavors to scents.) There is some freshness—grass maybe?—to it, which I would expect from a green tea. Nice for a cool spring night, but I doubt I will get this specific tea again.

(Yay for my first tasting note!)

Congrats and please continue with more!

Yesterday yours truly (J) had some Jade Cloud (also by Tea + Spice Exchange; 1 tsp in 8 oz) and I hated it so much that I didn’t go for a second steeping and just trashed the leaves. I felt a little guilty, thinking “maybe I don’t like green tea”.

Today, though… green tea makes a comeback: S + J both had 2 tsp in 4oz of Mystic Dragon over ice. We both really liked it (J more than S). Turns out we like dragon green but not jade green. S points out that the other two green teas we have are jade. Bummer.

This helps explain why we like the red dragon iced tea made at Sofra (cherries/juice + green tea + simple syrup).