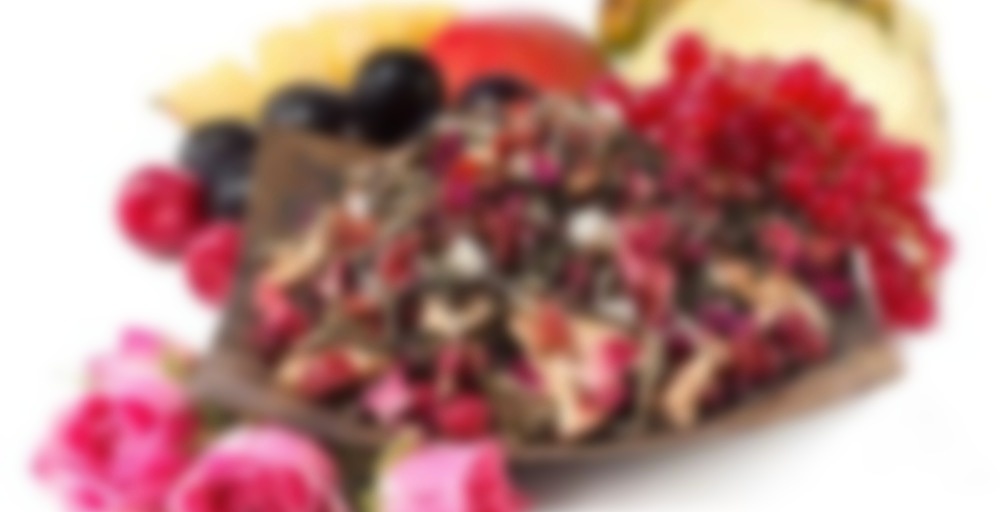 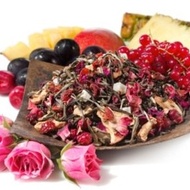 with 62 Ratings Rate this tea Rate This Tea

Realize the legend of the Fountain of Youth with this ripe berry from the South American Acai Palm. In this tea blend, the acai berry is finely ground and carefully sifted into white tea tips and tropical fruit pieces to release a flood of vitamins and youthful energy in each enticing cup.

Departing from my day of only drinking things I’ve already opened to try this.

I’m so confused, though. There are two Youthberry entries for what looks like the same thing (they’re both white teas with a bunch of other stuff in them including acai berries, mango, pineapple, currants, etc.) and then there are a bunch of other Youthberry combos. I picked this one for my Youthberry note. Mine’s a white tea with all the foregoing stuff plus more in it.

I’m pretty sure I got it as part of the tea of the month club. I was holding the open packet in my hand when the BF walked in and announced he could smell it across the room and he really wanted some of whatever it was.

It’s another of those visually attractive Teavana fruit blends with pieces so big I’m really sort of shooting in the dark on the measurements and leaning toward severe overleafing. In the packet it smells very floral to me, a sort of mostly hibiscus with some rose fragrance.

The liquor is a very light rosy pink. There aroma of the steeped tea smells very hibiscusy, sort of tart-bitter. Rather medicinal and not at all promising.

Fortunately, it doesn’t taste as scary as it smells. In fact, it might be that the tartness really cuts the plantiness that white tea can have—which may explain why I like white grapefruit blends.

Sacrilege, I know, but this is one hibiscus and rose hip blend that doesn’t make me pucker like a fishface and run for the sugar. There’s actually a sugary, dewy sweetness to it at the end of the sip and in the aftertaste. I wouldn’t know an acai berry if it hit me in the face, but perhaps that’s what I’m tasting? With an undercurrent of currant, pardon the expression, that pulls the flavor a little deeper and keeps it from just skidding along the surface.

What I’m not tasting or smelling is the mango, pineapple, etc. except in a very general sense, which enables this blend to completely avoid any association with Adagio’s White Tropics. I really like it more than the Shanghai Orchid of yesterday and will jigger the ratings accordingly. Time will tell if it is a restock, but at least it’s one Teavana blend I have that hasn’t been discontinued.

ETA: The BF loves it.

This tea smells absolutely incredible! Unfortunately, whenever I’ve made it it comes out fairly bland and weak. Maybe I’ll make some pot-pourri with it.

try 3 tsp per 8 oz. I read online that Teavana baristas use TRIPLE the amount they reccomend for at home in the store. Perhaps to sell more tea…?

Wow. That’s insane. I’ll have to try that next time I want a fruity tea.

i really enjoy this tea. its, for me, the poster child of a flavoured white tea. Its fuity and light but contains a natural sweetness that only amps the taste of the actual tea leaves. As every flavoured white should be. It tastes like peaches, strawberry, pineapple and of course acai. i really enjoy teas like these and they make me realize why i love tea so much.

although I had a cold sample in the store, when hot tasted a little bit fragant, love that’s white tea based, sweetened with a dash of honey. It’s tasty & yummy having it cold, let’s see how the second steep comes up.

I love this tea! It’s the perfect tea for summer. It’s light and fruity, which is definitely a guilty pleasure for me! I’ve been following the brewing instructions (although giving it a little more time on the second steeping) and it’s been perfect!

I tried making this tea so many times and kept saying to myself “give it a chance!” Months passed by and before I knew it the entire tin was gone and I was left thinking that I gave the tea plenty of chances to redeem itself. I don’t quite know how to describe it, but this tea had almost a sour hint to it. Perhaps I can describe it through feeling: when I sniffed this tea, I felt like I would get a headache. This was just not my cup of tea.

I wouldn’t be surprised if you absolutely love it – others’ reviews are much more favorable than mine :)

The dry scent of this is simply fantastic. I steeped the leaves for 4 minutes per the instructions on the bag (really, Teavana? 4 minutes for a white tea?) The first few sips tasted lovely….a subtle, clean base with bright, sweet, juicy notes of berry to round things out. Halfway through the cup I started detecting bitterness (I’m guessing from the amount of steeping time?) All in all, this isn’t a bad flavor, but I’m not especially drawn to it. (then again, I happen to have a thing for green or black teas anyways) I’ve tried this blended with the wild orange blossom from Teavana, and after having it straight, I think I prefer it blended.

Had a sample of this and it is exquisite! I even thought about making some into ice cubes for the summer time. GREAT hot or cold :)

Another gift from a friend.

Drinking this cold today. I had it warm over the weekend and thought it would be a good candidate when chilled; it is better cold, in my opinion.

The description on the container states that orange is the key flavor in this, but I don’t taste that at all. I taste mango, pineapple, strawberry, and some sort of artificial candy flavor that reminds me a bit of Hawaiian Punch. It is fine if I am in the mood for something like that. It isn’t something I’d grab if I was in the mood for tea, though, since you can’t taste the white tea in it at all.

Overall, I’ll save it for when I am in the mood for something fruity to drink—it’s definitely a healthier option than Hawaiian Punch! :)

Tuesday 2/9 So from Starbucks when you used to get free refills on brewed coffee/tea while in house I’d sit around in Starbucks and get “refills” of teabags and just put them in my purse as I would continue drink whatever tea/beverages I had with me. Anyway, this was 2 teabags best by almost 4 years ago, brewed lukewarm and plain.

Wow, they gave you new teabags for refills? Most coffee/tea shops around here think a tea refill is just giving you another cup of hot water for your already used teabag.

I used to buy a regular priced drink and probably some sugary snack then sit and read a book or play on my phone… then yes my free refill of coffee or tea would be Teavana teabags (they’d let me pick from the assortment they had).. but obviously this was years ago, I haven’t sat around at a Starbucks in quite awhile!!