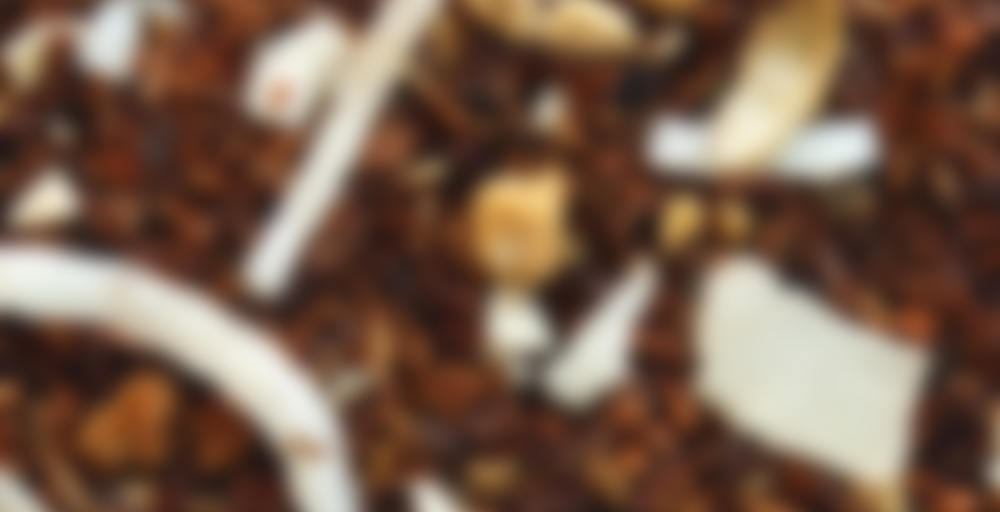 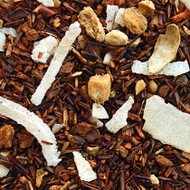 A signature herbal tea blend blend. Swinging from a tree with rooibos, coco, coconut & banana, chai spices and flavor. A customer favorite! Try with a splash of milk or cream

One of the yummiest rooibos chai blends I’ve tasted … ever. It’s a very cinnamon-y chai, but I also note peppery flavors as well as clove.

But what makes this chai unique is the coconut, banana and chocolate! I love that the coconut and banana are in there, and they are strong flavors. I wish that the chocolate was stronger than it is (because more chocolate always = better.)

The nutty flavor of the rooibos works well with this tisane too, it all comes together in a very flavorful way. Really much better than I would have expected given how much is going on with this chai.

The weather is deceptive! I looked outside and saw the sun shining and a complete lack of wind…perfect weather for a stroll to the thrift store (hunt for a new teacup!) but the minute I stuck my head outside I yelped and slammed the door. COLD!! I was under the impression that it was going to be warmer, but it seems I was deceived. At least I didn’t have to go out, unlike Ben who came home and icicle after his bus was late. I need to think about something warm and exotic, like this tea.

Today’s tea is Jungle Monkey Chai by Tea Xotics, a spicetacular (it’s a word now) blend of Rooibos, Cocoa, Bananas, Coconut, Chai Spices, and Flavors. The aroma is intense, mixing chocolate, banana, and coconut for a sweet and creamy taste. Toss in the earthy aroma of rooibos as an afterthought and a pleasant undertone of spices and you have a crazy, mouthwatering blend. The aroma reminds me of an ice cream that I ate tons of as a teenager (it also had monkey in the name) but with the added bonus of chai spices.

The brewed leaves still have a very clear sweet creaminess reminiscent of ice cream, but the chai spices and rooibos earthiness become much more distinct. It does make the aroma seem a little muddy since there is so much going on, but it is still pretty mouthwatering. The liquid is very sweet and creamy, with notes of earthiness and strong spiciness. At the end there is a kick of rich chocolate.

After the aroma of this tea being nothing short of a decadent dessert, I have high hopes for the tasting. As is typical with chais, I have this with a copious amount of Half & Half, but I did not add my usual sugar since Rooibos is pretty sweet on its own. First impression: Sweet! Bananas! Chai! ICE CREAM TEA!! This tea tastes so much like the ice cream I used to eat that I am practically dancing around with happiness. The chai spice taste is distinct, but it does not overpower the tropical goodness of coconut and bananas. The mid to aftertaste is earthiness and chocolate, which is a nice finish for such a sweet tea. I do wish the chocolate had been stronger (but when don’t I?) but other than that, this is an awesome tea.

For photos and blog: http://ramblingbutterflythoughts.blogspot.com/2014/01/tea-xotics-jungle-monkey-chai-tea-review.html

I think this requires sweetening to bring out all the flavors.
Very fun!

I got this as part of my Amoda Tea subscription which i sadly can no longer afford. It was heat fun.

Interestingly, there were two tropical-themed chais in this box: this one and Mowgli’s Fire Chai from Bluebird Tea Co. Of the two, I much preferred this one! It wasn’t a typical chai at all…the spices were quite light and really just provided some depth to the chocolate, coconut, and banana flavors. Actually, the flavor overall was rather light, but quite delicious! I’d be curious to try this one with milk as well.

Well, I’m sick again, which means little or no caffeine for a few days. This turned out to be a good choice tonight! The coconut is wonderful and gives the tea some creaminess even without milk (I really don’t like putting it in rooibos). I’m usually not a huge banana fan but it works well with the other flavors. There’s definitely some cinnamon here, but this isn’t a spicy chai—it’s mellow and easy to drink.

I think I’m getting to the point where I’m a lot pickier about flavored teas. Maybe my most recent pregnancy altered my tastebuds, or maybe I’m just at that point in my explorations. This tea tastes too sweet and a bit too artificial for me, even though I liked it a handful of months ago. I did probably brew it too long, but still it’s just not very appealing to me today. It tastes strongly of sweet coconut, but I wish it had less sweetness and a fuller coconut flavor.

’Here’s Hoping’ traveling teabox Round #2 // Tea #39
Oh the ingredients here are fun! A rooibos chai with coconut, banana, chocolate! If only you could taste them more. The rooibos is a nice one. There is a hint of spice. The coconut is nice – it’s the big flakey type that has the best flavor in teas. The chocolate and banana would have been something special. What I can taste is cohesive though!

I think I’m getting burned out on all these teabox tasting notes! Almost done with them, then I’ll be sipping my favorite teas for a while, I think.

A coconut, banana, chocolate chai that won’t keep me awake all night? I’m there.

This is a nice herbal. I like the robust coconut flavor and the sweetness of the banana. I don’t taste the chocolate at all. I kinda wish it were there even a little. I do like that the rooibos does not have a strong medicinal taste or an overly strong woody note. All in all this is a good herbal. I think my kids would enjoy it even more than I did.

Were the spices strong?

No, they were pretty mild. Coconut was the dominant flavor followed by banana. The spice was kinda hanging out in the background.