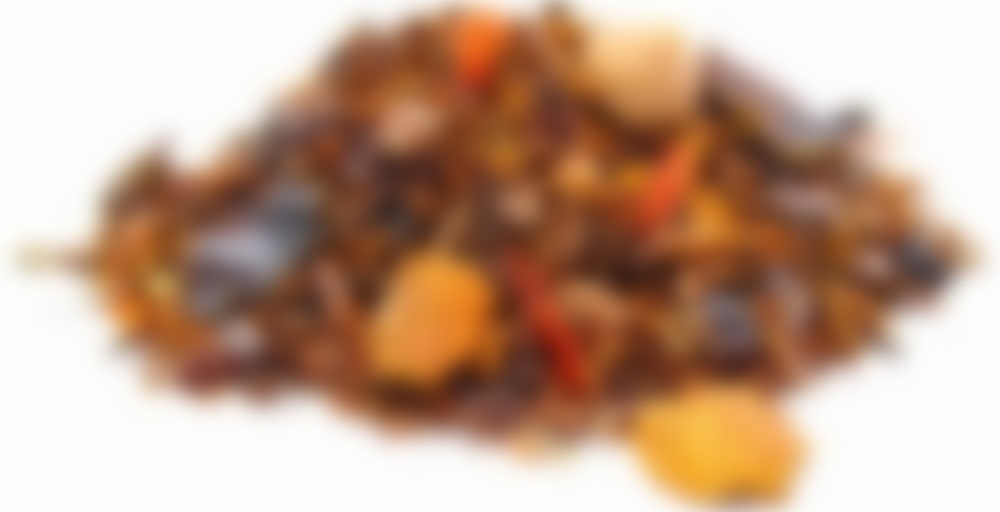 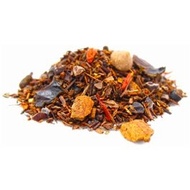 A popular flavor combination in Mexico that is perfectly paired with our organic South African rooibos. We add Mexican pasilla chiles that have a sweet and fruity flavor with a mild spicy finish, organic Ecuadorian dark roasted cocoa beans, and a touch of cinnamon to round out this distinctly satisfying tea. Enjoy straight or with a splash of cream.

This is the wholesale source of:
Mexican Hot Chocolate by Par Avion Teas
Spicy Chocolate Rooibos by The Angry Tea Room

Bumping this up because it is that delicious….can’t stop thinking about it and can’t wait to order the 4 oz size.

This is a brand new offering from Tea Guys that is not even on their website yet. If you are interested in it, you can order it via telephone. I recently placed a large sample order and this was amongst them. The ingredients are organic rooibos, cocoa beans, organic honeybush, cinnamon, cinnamon chips, dark chocolate flakes, ancho chiles, pasille chiles, saffron, natural flavors.

While I am not getting much of the chocolate in this, the spice mix is really warming and amazing. It isn’t too spicy, but I bet it would flush the really fair skinned folks. The cinnamon and chiles play nicely together. I wish I could taste more chocolate. I might try stirring some actual hot chocolate into it. This is good enough that I would buy it even with the somewhat weak chocolate presence. Further, Tea Guys offers reasonable prices.

Incidentally, this best with a pinch of sugar and a splash of chocolate milk didn’t hurt things either :)

Another review I’m moving now that I’ve found the wholesale source; I tried this tea as “Spicy Chocolate Rooibos” by Angry Tea Room (they no longer carry it). It is still available as “Mexican Hot Chocolate” by Par Avion Tea.

This sampler came from the Here’s Hoping Teabox, so thank you to tea-sipper for organizing and all teabox contributers! I prepared this as a small pot of tea in the evening, to hit that evening sweet-tooth craving while not having to worry about caffeine.

The dry leaf had a very sweet chocolately scent, a bit like cinnamon and nutmeg mixed with powdered cocoa, and it also came off as just slightly floral to me. The steeped cup has a very nice cinnamon spice aroma with a hint of cocoa in the background, but I’m a bit of a spice-wuss, so I’m a bit scared of the amount of chili in the blend… But it honestly did not have the kick I was worried about. Really, the tea just has a warmth to it that ends up feeling quite cozy. The rooibos/honeybush base has more of a sweet chocolately note than tasting much like either of the base teas, though I wouldn’t say the chocolate is extremely strong, either; present and noticable, sweet, but not rich or overpowering. The cinnamon is the dominant flavor, and it starts off quite sweet on the tongue, but then the warmth of the spicy chiles settles on the back of the tongue, leaving the finish of the sip slightly spicy, and with a warm, satisfying feeling down the throat and in the stomach. The spiciness doesn’t unpleasantly linger, but I’m sure the tea would also take a bit of milk well to taste, for those even more spice sensitive than myself (and I consider myself pretty sensitive!)

I had my reservations, but this turned out really nice. I’m glad I decided to try this despite the scary “spicy” word and two types of chiles in the ingredients. It reminds me of Mexican cocoa, if the chocolate notes were toned down a bit.

Aw, Angry Tea Room doesn’t sell this anymore? I just had this the other day. At least you found some sources.

How are you tracking down the wholesale sources? I have a few I’d love to find.

@tea-sipper: It seems with the exception of “Sue’s Blend” which is Tea Guy’s “Chocolate Ginger Bourbon,” I’m not really seeing Angry Tea Room stocking any other Tea Guy blends anymore. Par Avion Tea seems to be exclusively repackang Tea Guy blends, even ones that have now been pulled from Tea Guys’ retail site (they must have made some of their blends available as wholesale-only now).

@Shae: Careful searching of ingredient lists, mixed with my library science research training, pretty much. There are still some that stump my best efforts, but I have gotten pretty good at it. I’m still in the process of moving a few of my reviews around, because if one mom-and-pop-shop stops carrying something I find it much more meaningful for me to look for a tea using wholesale info and prefer to archive off of that. (And I use my Steepster hive-mind not for inventory, but archival purposes; I have an external spreadsheet I use for up-to-date inventory needs).

Yeah, you’re good at this kind of thing. I didn’t even notice Angry Tea Room was sourcing from Tea Guys and I’m familiar with their teas.

Thanks for sharing! I’m so impressed you’re able to find all these.