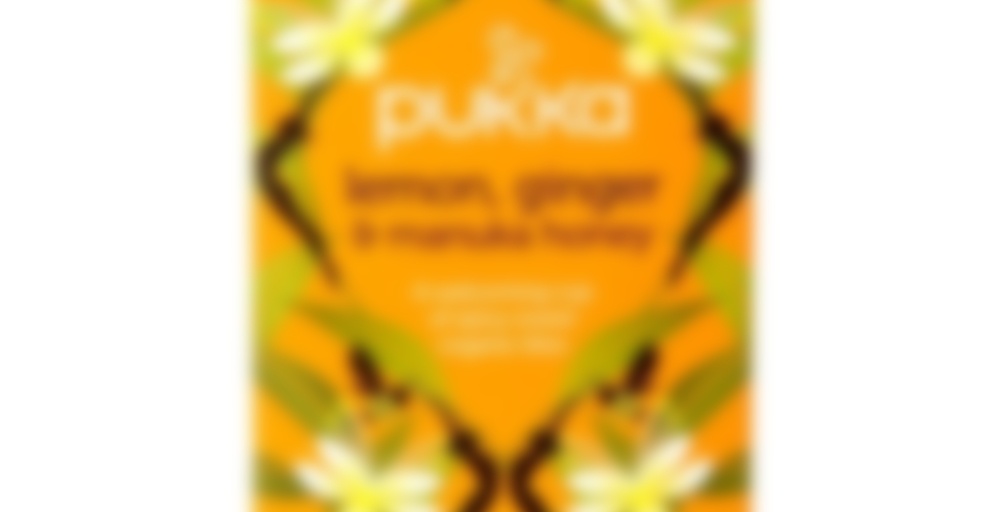 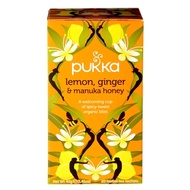 This tea is made from ripe, organic lemons and ginger root that we have slow-dried to capture their intense deliciousness. The oodles of fruity-spice are then blended with manuka honey to give a soothing, sweet finish. And, as with all Pukka teas, they are naturally organic and totally free from artificial flavourings.

Preparation
To get the best from this tea, infuse for at least 5 minutes to release its full flavour

The lemon and honey combine to make a nice gentle tea. It’s not sour at all, and I also don’t taste any ginger. There’s some sweetness from the licorice. It all combines in a really soft, pleasant way. I’m drinking this cold, and I really wouldn’t mind some more if I come across this one again. The reviews for this one are brutal and in my opinion undeserved.

“A welcoming cup of spicy-sweet bliss”??? When I brewed this cuppa, it didn´t have a lot of clear “welcoming” indications, according to me : the yellow broth wasn´t inviting, not in colour not in aroma and even less in texture. Not too citrusy, and I cannot really tell where the honey (2% according to list of ingredients) has gone either.

Watery lemon and ginger and little licorice and turmeric. It wasn’t bad, just super watery for steeping 1 bag in a mug for 15 minutes. Why so weak? The bag smelled so promising.

I had this last night. I hate to have a nearly full box of tea that I don’t want to drink. But I don’t really like this one, so I think it will languish. It was actually a little better than I first time I made it, but I still only managed half the cup. Sad, huh?

In one word? Dismal. At first, the teabag had a lovely amber, sticky golden syrup honey aroma… once brewed, however, it was just overpoweringly strong ginger and anise. I brewed the first cup for the full 5 minutes but found it too strong… deciding I would be able to judge it more fairly at 3 minutes, I gave it another go. Besides the overbearing anise and ginger, there’s a little hint of lemon in the aftertaste but no sweetness or honey whatsoever that I could detect. For someone who usually loves strong ginger, this was just too much. It lacked depth as well.

I actually wrote a whole 1000 words about this tea because I dislike it so much, you can read it on my blog here https://www.immortalwordsmith.co.uk/pukka-lemon-ginger-manuka-honey-tea-review/

This one’s more complex than it first seems, comprising liquorice, elderflower, fennel seed, and turmeric in addition to lemon (many & various – verbena, oil, zest & myrtle) ginger, and honey flavouring. In fact, considering there’s so much emphasis on lemon, my first thought is that it’s not actually very lemony at all. It’s not particularly gingery, either, but that works for me given that I’m not a fan of ginger anyway. The lack of lemon is upsetting, though.

It’s sweeter than most lemon & ginger blends I’ve tried, the dominant flavours being liquorice and honey. There’s also a decent amount of fennel, which I like, but which makes the whole thing sweet and aniseedy. I don’t actually mind the liquorice, which is something I’ve found with a few of the other Pukka teas I’ve tried. It doesn’t taste as artificial and isn’t as throat-coatingly obvious as it can be – which is usually when I hate it most. Perhaps it’s just that the balance is right for my tastes here.

This one’s nice enough, but I wouldn’t really say it’s a lemon and ginger blend. Another thing I’ve found with Pukka is that their blends tend to be quite “busy”, and this one’s no exception. Sometimes I haven’t minded it, but it’s definitely detrimental to the overall flavour this time. Nothing really stands out, except how sweet it is, and how little it lives up to its name. A bit of a disappointment.

I’ve said this in other posts but This tea came from the Pukka tea Sampler on Amazon, I was really bummed that most of the ones I wanted to try that were in the photo did not come but others came instead.
I was very nervous about this tea as I abhor lemon teas but figured I’d give this one a try since it has ginger in it. I was pleasantly surprised.
Flavor: The ginger is coming through slightly stronger than the lemon but does not overpower it, the manuka honey gives it the perfect amount of sweetness. so this tea needs no additives. All of the flavors are coming through nicely for me, this tea is far from exciting but I might consider buying it for the health benefits if it was on sale. Pukka teas tend to run about nine dollars a box. For someone who wants a strong flavor this may not be the tea for you. Overall it reminds me of Lemon ginger infused water.

Not even in top 5 of ginger teas I drank. It tastes a bit artificial and leaves a little unpleasant sweet aftertaste.

It’s not horrible, but I won’t really drink another cup of this.

Another from MissB. I had a feeling this tea would be a bit to sweet for me when I saw Honey in the label but I thought I’d give it a try. It tastes artificially sweet to me and it’s hard to get past the sweetness to taste the lemon and ginger. Meh but I’m happy I tried it.