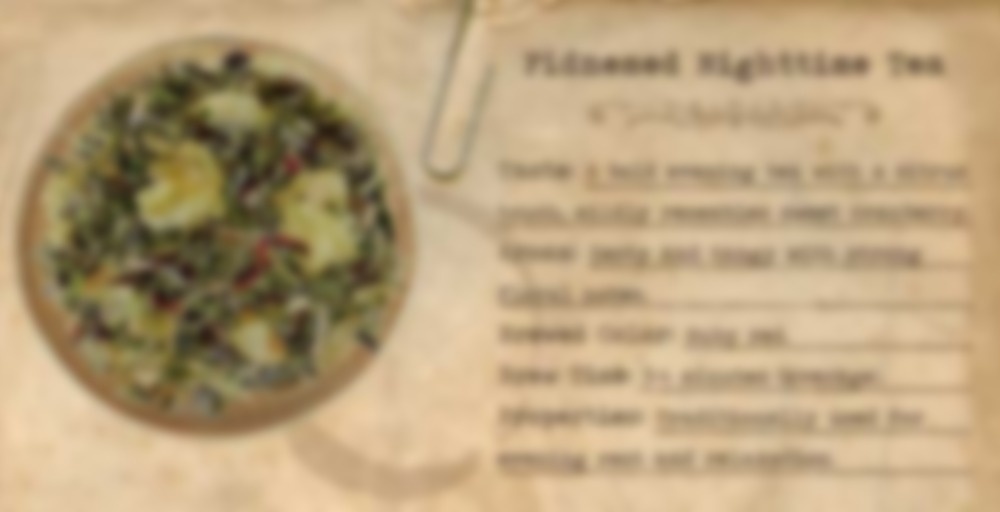 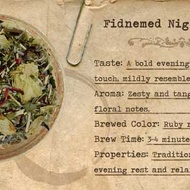 by Mountain Rose Herbs
77
You

So this is the tea I meant to drink two nights ago but I made Dream Tea instead. I remembered that the tea I had heard would knock you out was also called “Sleeps on Rocks” so I dug in my samples box until I found this.

This is the most unusual tea I have ever had. Some of the leaves were huge, others were so fine. I used a large basket with fine mesh. When I lifted the basket out of the cup there was a yellow liquor with a single hovering spot of red, like blood in the bathwater when you cut yourself shaving your legs. The red spot expanded until it slowly stained the whole cup. Wow.

From what I could smell, it was going to be a savory tasting brew. I almost added a bit of honey but then decided to treat it like a savory broth and not even try to pretend it was “tea”. I had no trouble drinking it down. I did have trouble functioning after that. My fingers felt a little….alien and clumsy as I ever so carefully carried the cup back to the kitchen. Hubby had fallen asleep on the sofa citing a headache, so I resteeped the leaves and carried him a cup. I told Mr. Picky not to sniff it, taste it, or say anything about it, just throw it down and go to bed. I don’t want him to get sick, too! He dutifully obeyed.

I went to bed and while I did not fall asleep right away I did utterly and completely relax and could indeed have slept on rocks without moving. Hubby’s head hit the pillow and the snoring commenced.

Is this stuff legal? You bet I am giving some of this to friends in stressful situations who desperately need sleep (bestie works hard and has a special needs son who now has seizures added) and could use a little safe help now and then. My hubby has a lot of trouble shaking a cough when he gets one, but what really throws him under the train is the sleep he misses. That part almost kills him. (Literally, he was hospitalized nine days with pneumonia years ago and got it again six months later.) I think with this in the cabinet, he won’t miss any sleep again.

Skullcap, hops, and valerian… Oh my!

The “hovering spot of red” that expands is fascinating. Have you tried again and did it do the same thing? If so, I’d love to see a video.

this sounds like quite the experience! i could really use a decompressor in addition to my plethora of anxiolytics whose efficacy appears to be waning! love the description of what happened during the infusion…feel like trying this tea if just to witness that :)

I am guessing that a single small hibiscus blossom must have been right there. They can flood a tisane with such color. This definitely doesn’t taste like hibiscus, though. I am very stuffed up but still felt that it tastes more like a very natural broth made with exotic or heirloom spices and little salt, rather than tasting like a minty, chamomile sleepy tea. I really melted into my mattress, but I never take sleep aids so maybe I am more easily sedated. LOL!

Made it again tonight. Same color separation. When I draw out the basket, it is golden liquor with red at the bottom of the cup which then spreads to make a nice orange-red blend.

Wow, I can’t get over your description of the liquor, down to its effects. I sincerely hope you and your husband will stay healthy, and this tea will help with sleep.

That is SO COOL! Going on my Mountain Rose order list. :)

First, let me say this tea works. It’s a different feeling than chamomile – I actually felt fuzzy and slow after drinking it! I slept deeply and was not restless. I found the taste herby and not too bad – the smell of the dry tea is more offputting than the brewed flavor (the valerian – if you’ve smelled it before, you know of what I speak! FEET!).

My husband, on the other hand, did not feel sleepy from it! He is the guy who can take prescription sleeping pills and not feel sleepy, though. What is going on there, I don’t know! He’s been this way since a baby.

It works out though – he swears by the Forests tea for sleeping well with his allergies (so much so I’m almost out of the 4oz I just purchased, and just ordered a pound!), so I make him a cup of that before bed, and I drink this.

Hm. I may need to try this. I have had trouble sleeping for years now. I’ve tried prescriptions but while they put me to sleep, I don’t stay asleep, nor do I sleep deeply.

Okay, I need to buy both of those!

Works for me! I suffer from anxiety and occasional panic attacks, which sometimes strike when I should be sleeping. Zoloft at night and Xanax at the onset of a panic attack works, but I am trying to rely more on natural remedies. This tea sounded good from the Mountain Rose site’s description, so I ordered some. I used about a tablespoon and a half in my acorn teapot from Stash (not sure of the size). Drank the whole pot before I went to bed, skipped the Zoloft and felt very relaxed. Fell asleep in a timely manner, slept through most of the night, and woke up with no neck or shoulder pain, which I usually get due to waking up multiple times and stressing during the night. So far I am highly satisfied, although it took me a bit to get used to the hopp-y flavor. I enjoy a good beer, but that is not a taste I associate with bedtime.

This tea is not sweet or floral. It it definitely foresty. However, it does it’s job. I can be knocked out within 30 minutes of drinking this. The valerian also helps with anxiety, so if you need something to calm your mind so you can sleep, this is the tea for you. I drink it straight, but I add honey for my honey.

Looks a little like salad dry in the pouch…definitely a woodsy flavor to it (drnking it with a chocolate chip cookie remedied any valerian mulchiness). So far I haven’t met a tisane that will put me out completely on its own—will have to report later on any possible zzzzz effect.

ashmanra, I put Tazo outside so I didn’t have any help steeping it :)

The word ‘pouch’ always makes me think of kangaroos, so it’s always very weird when I see it in other contexts. I just wanted to get that off my chest.

Language is a funny thing. Packet, then :)

Haha, nooo, ‘pouch’ is fully legitimate in this context, and I LIKE thinking about kangaroos. Keep pouchin’!

Ended up supplementing with a Tylenol PM due to a headache, so that sort of messed up the integrity of the experiment…