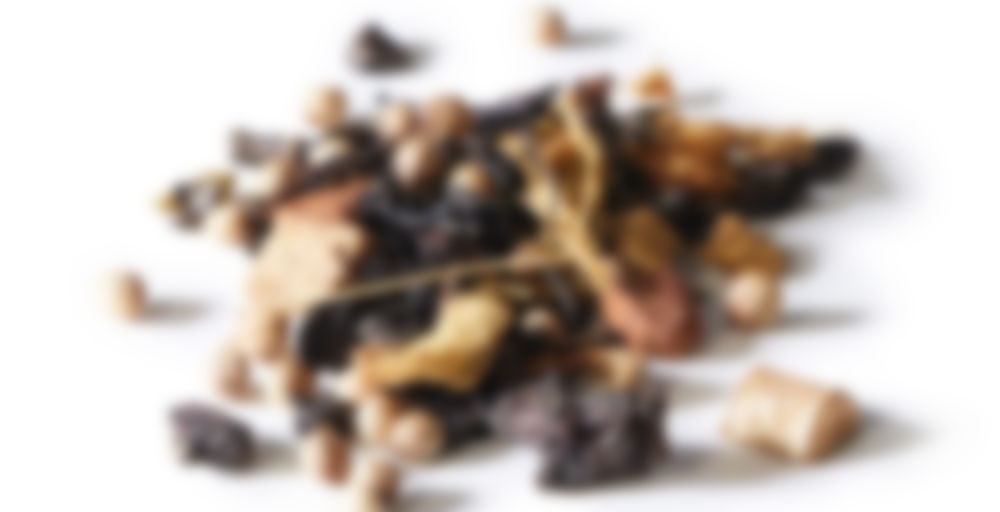 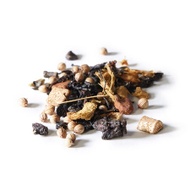 How it tastes:
Sweet, warming & comforting, with the rich decadence of baked caramel

Your shortcut to pure radiance. Sparkle through midnight with a glittering chai that features bold black tea, gold caramel pieces and soothing traditional spices like ginger, cinnamon and clove. Sweet, rich and warming, this spiced black tea is a delicious way to add a little glitter and glam to your holiday celebrations.

Night in the Glittering Caves

AJR had mentioned not being able to see the glitter in this tea well, so I broke out my glass travel thermos. The latest one. That I haven’t yet broken in some random tragic tea bungling mishap. It will happen eventually. Always does.

Anyway, this tea looks really pretty steeped up with little bits of sparkle. They seem to fade after a while which I’m guessing might be them sinking to the bottom. The flavor is really light, not heavy like I’d expect a chai to be. Glamour chai? I get some cinnamon in the sip, although it’s stronger in smell. Mostly just getting cinnamon, but it seems rounded out and not a sharp cinnamon. I should do a longer steep next time and see if I get deeper flavors.

I love the way this tea looks dry. There are little bits of cinnamon bark, various seeds and little rock crystals. I got a new macro lens to use for photographing my work and had to try it out on this tea! Posted some pictures on my IG. https://www.instagram.com/p/CIeUBR-gTJ4/

I think there must be more glitter toward the bottom of the bag because I finally saw some in the cup I had of this a few days ago!

It looked like most of the pieces were coated in a light dusting of glitter, but some of the more confection like pieces were extra coated, so it makes sense that those heavier parts might sift to the bottom.

Why I haven’t noticed that photos back then? I agree with tea-sipper completely! My photos seem lame compared to yours!

No Martin, your photos are great, but I love seeing Dustin’s close-up tea leaves. haha

Thanks! My secret is an awesome lens that attaches onto their specially fitted phone case! I take close up pics of tiny jewelry and the photos I’m getting with this lens compared to my previous clip on macro lens are a huge improvement. Taking macro pictures of pretty tea is fun too!

I can’t really tell the difference between the glitter in this chai and when there are random little particles floating around in my cup. Nice idea though. This one didn’t need milk. The black tea was very light. The spices were decent, if a little generic and sweet. I know I’ve had plenty of other chais similar to this. It’s not spicy. The resteep tasted the same as the first. Quite similar to other DT chais. The strongest flavor is cinnamon.

Just a typical, tasty chai. Nothing out of the ordinary.

I’ve been holding onto this since last year. Finally tried it, and enjoyed it more than I thought I would. It’s sweet cinnamon. Pretty one-dimensional, but I enjoyed it.

gross. so sickly sweet and cinnamony. Appreciate the share variaTEA but omg as a tea this is just too stupidly sweet to consider drinking.

Hahahahaha I guess my sweet tooth is bigger than yours. Also, I’ve only ever had it as an underleafed latte so perhaps that helps.

Ah, the original Glitter & Gold was already pretty sweet and this sounds sweeter.

Tastes like a sweeter/more caramelly version of Glitter & Gold? It’s alright, but I’m fairly over cinnamony blacks. I didn’t even watch for the glitter though, that makes me sad…

Loved it, accidentally steeped it for way too long, made a nice strong chai that wasn’t bitter at all

I got some of this on sale because I had heard it really does glitter, and the idea of drinking something that glittered just made me so happy. This tea has a very strong cinnamon smell but does not taste quite as strong as the smell. It is sweeter than other teas and that is probably why I like it. I think I like it better than some other straight chai teas but the flavors are still a bit strong for me with all the cloves, cinnamon and I believe chicory root. I think I would enjoy the taste more as a latte, but as I rarely have milk around the home I will probably drink it straight more than as a latte.

This is not good as an iced latte. I should have none that this flavor lends itself to being hot.

Another new tea – one of two released with the New Year’s collection this year.

I think I like this one!? That doesn’t sound confidant, I know, but to be honest despite having had it like a half dozen times I honestly don’t know if I exactly enjoy it or not.

It’s cool though visually, at least! Much like the OG Glitter & Gold blend, this tea shimmers in the cup when you brew it – but the shimmers are gold! It’s really gimmicky, but I actually kind of love it. There’s just something very fun and magical about it, and it drove me to buy like 100g of it to have on hand purely to have a tea on hand that has that sort of “wow” visual for whenever I might have company over and want to steep something impressive. The shimmer comes from an edible/food grade “luster powder” that’s mixed into white chocolate caramel pieces, and as they melt they release the glitter…

As for the taste? Well, I think that’s the part where I’m kind of unsure if I’m vibing with it. It’s pretty sweet, and reading the ingredients list I think it would be easy to say that’s coming from things like the caramel pieces or the brown sugar, and while I do think they add some sweetness I don’t think they’re actually the primary culprits of the sweetness I’m experiencing in this! Cinnamon is quite sweet, and there’s A LOT of cinnamon packed into this tea – so much so that it’s initially hard to taste anything other than cinnamon and sweetness. So, that adds a lot of sweet cinnamon flavour – very similar to fan favourite Cinnamon Rooibos Chai actually. I don’t personally think that DT needs another cinnamon heavy chai – we’ve got enough cinnamon forward chai blends! However, people seem to love it so that’s probably why we keep doing it.

On top of the sweetness of the cinnamon, though, is an added lift of sweetness from the fennel in the blend – which adds another element of sweetness. I actually like fennel a lot, and the times I’ve been able to taste the fennel in this tea along with the cinnamon are the times I’ve enjoyed it the most. However I know that fennel can be really polarizing, so maybe it’s overall better the fennel just adds sweetness and doesn’t consistently taste present!? I don’t know.

THe other thing is that there’s “caramel” in the blend, but you can’t taste caramel and that bums me out – I just really want a good caramel tea! Is that so much to ask!?

But yeah – I like the cinnamon and I like the occasional fennel, but I’m iffy on the sweetness level and I don’t think it’s a particularly unique flavour even if I like it. I love the visual though, and the throw back to OG Glitter and Gold!