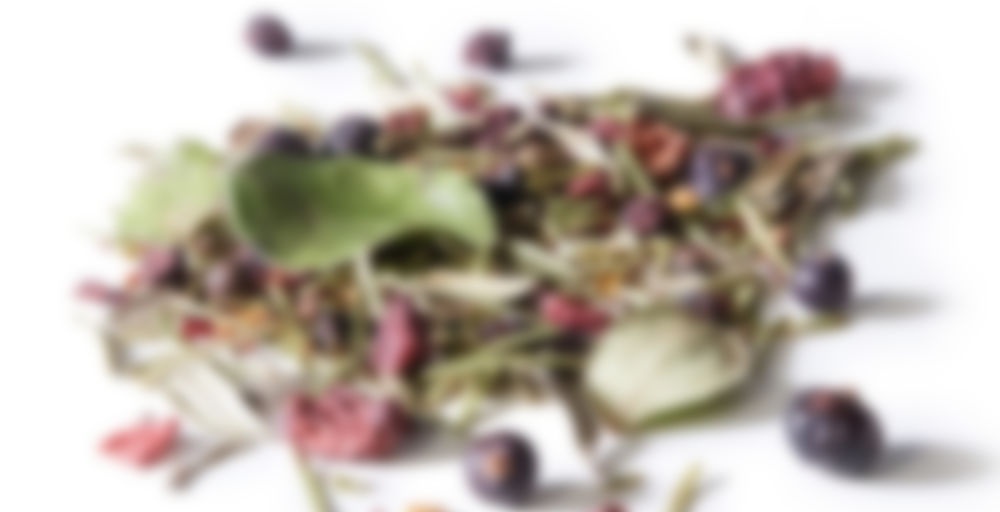 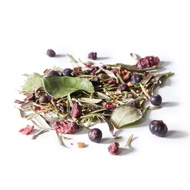 I was so excited to see this tea released, and immediately bought 4oz. I love juniper and fir flavors, but they’re so infrequently used. My order arrived last night (2 days early!) and I immediately brewed a cup of this up. The prominent flavor is definitely the blueberry/raspberry flavoring, but I also get a bit of tartness from the cranberry, some earthiness from the pine, and a bit of coolness in the aftertaste from the wintergreen. I do wish that there wasn’t any of the berry flavorings added, as that would’ve made it perfect for me. It’s also such a beautiful tea. I was so giddy watching it steep. It looks like a Scandinavian forest floor. Overall, I love this tea. I do wish the fir/wintergreen/juniper were more pronounced, and there was less berry, but it’s still an excellent nighttime winter treat.

Another new holiday blend from DT!!

I’ve been excitedly waiting to talk about this one for a long time – the development for it was just wrapping up when I started working at the head office, and it was something that everyone in the tea department was really excited about. It was actually supposed to launch as a web exclusive on November 1st but as I’ve mentioned there were just some delays in updating the website with the new design changes, so I’ve been checking daily waiting for it to get updated so I could publicly talk about it!

This is honestly such a cool blend. I know people are going to be sad that it’s not in stores, but the availability of a lot of the ingredients used in this tisane were just really limited because it’s blended with a mixture of very North American/Canadian specific ingredients – some of which were actually foraged. So, the quantity just isn’t at the level it would need to be to supply all stores. And to that point, it’s also a very limited quantity available online as well – more so than any of the other web exclusive holiday blends this year…

So what makes this blend cool!? Well, personally I love the taste of both wintergreen and juniper so the fact they’ve both major ingredients in the blend is a strong win for me – and this is the first blend that DT has done in like seven years (if not longer) that uses actual wintergreen leaves and not just wintergreen oil! So, with wintergreen leaves over oil you still get that signature sweet taste of mint but it’s a little gentler and takes a longer time to really steep out. One of my favourite things is actually sucking on the wintergreen leaves after they’ve steeped, it’s sweet and cooling and kind of like a natural breath freshener!?

The best part is the fir though! I really, really love basically any tea that has fir in it – it’s so woody/pine-y and refreshing and makes me feel like I’m right out in nature going for a hike surrounded by crisp mountain air – and as far as I’m aware this is actually the first time that DT has ever used this ingredient! I anticipate that it’s going to be a somewhat polarizing flavour – I know that thinks like fir/pine/spruce scented candles and things tend to either strongly appeal to people or really turn them off. For me it’s just relaxing and nostalgic, but also something with a strong Christmas association for me. I loved the years, as a kid, that we had an actual Christmas tree and not an artificial/plastic one – that smell was simply the most amazing thing. Plus, growing up in Saskatchewan there were fir trees all over the place – and while they’re awesome year round there’s something particularly magical about them in the winter time when they have that sheet of snow draped over and everything just smells so crisp and woody. That moment, standing surrounded by snow covered fir trees in your toque and woolen mittens catching snowflakes on your tongue, kind of just feels like the summary of what a “Canadian Christmas” is…

Now, there are some other things going on here – and I’ll be honest I’m not a fan of all of them. There’s a few berry flavours in the blend; raspberry and blueberry. I think I’d like this tea a lot more if it didn’t have the berry in it, but I respect that both of those play into the whole “forest” vibe/story of the tea, and they don’t taste unpleasant. However, my least favourite thing in the blend? The cranberry (and to a lesser degree the rosehip/seabuckthorn). Yes, cranberry is a Christmas flavour and it feels appropriate for the story this tea is telling – but the tartness that it brings to the cup is unwelcome to me, and I find it detracts from the magic of the wintergreen/fir/pine tasting juniper mix for me. I’m certain that people will enjoy that aspect, especially those that might not want to drink a cup of hot pine water, but this is just personally what I view as the weakest element of the blend. I could do without it. It doesn’t overpower the woodier elements though, and it’s not the level of tartness or sweetness you might see from blends like Queen of Tarts, Caribbean Crush or Dandelion Detox – much more toned down.

So yeah, that’s Wintergreen Wonderland!! If any of what I described sounds appealing to you, then I’d check this one out – as I said it’s really limited. I don’t know if it’s a little too out there for most people, but I’d like to think this is a cool tea!

I was excited to hear your thoughts on this one! I love anything with pine, so I was super excited to see this released. I just ordered 4oz…can’t wait to try it!

Awesome, I hope you love it! Definitely let me know what you think when you try it :)

Pine and Wintergreen sounds great, I do have a small bit of pine left from Vitaleaf that I need to sip down maybe I should find some wintergreen to go with. The cranberry doesn’t sound so appealing here.