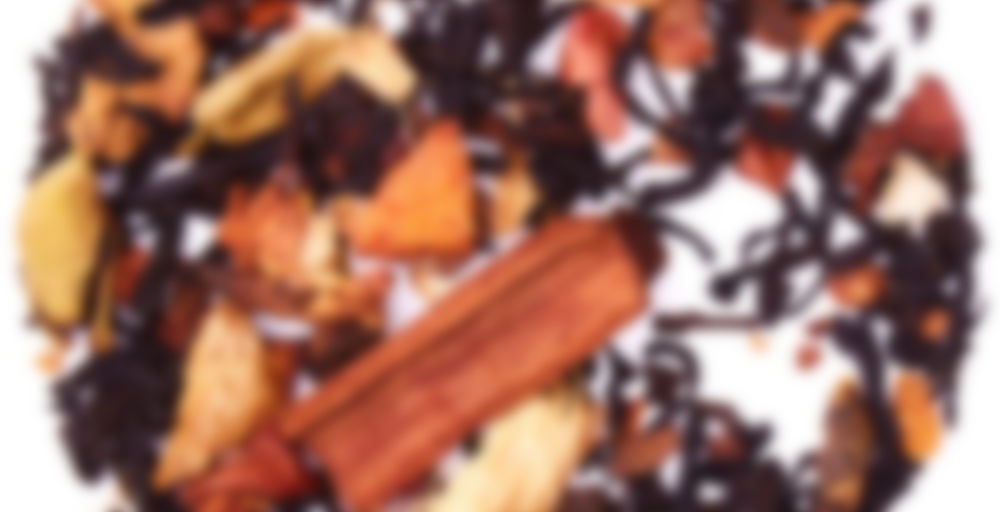 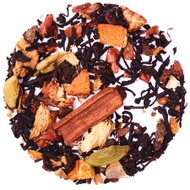 A quintessentially Canadian treat. This spiced maple chai is peppered with premium black tea, cinnamon, ginger and a sprinkling of maple sugar. Fun fact: it took our tea suppliers almost five whole years to capture that deep maple richness we love so much – and we’re glad to say they totally nailed it. Lightly spicy and perfectly sweet, this maple tea is a chai latte waiting to happen.

This one reminds me strongly of Teavana’s gingerbread chai, which I remember liking. For a black tea, it was a little thin, but I’ve been able to enjoy it both with and without milk. I wouldn’t say I notice any maple, but the spices combine into a pretty pleasant cup. I can’t really identify for sure what I’m tasting, definitely cinnamon, but the natural sort, not the intense red hot variety. The bag rates the caffeine as being low, but I can definitely feel it. Yeah, I think I like this one. The spice combination works. The second steep is as strong and tasty as the first.

Grabbed this in an order I’d made as a sample tea, hoping it would offer up as delicious as sampling as it sounded.

First, the smell. It’s DIVINE. Like hot maple syrup; I’m assuming this is part of the flavoring added, because there’s no way it could come just from the maple sugar. Regardless, I could sip this all day.

I made this as a heavy cream latte, knowing it had more than enough sweetener in it for me to drink it as is. I took a quick sip before adding the cream – and wasn’t a fan.

I should note – I LOVE chai. I’ll drink it all day, every day if I can. Cinnamon-heavy is never an issue for me; I note this because I saw Roswell and Kitenna both mentioned it, but I didn’t think it was overkill.

What I didn’t like – initially and after adding cream – was the aftertaste.

Okay, I don’t like apple pieces in my tea, so I’m sure that’s part of it.

But the ‘natural’ and artificial flavorings were off. It left a sour, bitter taste in my mouth, and the only reason I finished it was due to the smell.

I really wish DT would label their flavorings with more detail. Until then, though, this is a hard no for me.

Could definitely be the flavouring – but to me it sounds like the sour/bitter note you’re describing better fits the roasted chicory in the blend. Regardless, sorry this one was a miss for you!

So, Kittenna actually beat me to writing about this one – stores were handing out teaser samples of it for a while, and then it was soft launched along with the rest of the Chai collection, but I waited until today (the official launch date) to put up my own tasting notes!

As I’ve said for the last few year’s Chai Collections – I don’t like Chai. It’s just really not my thing; spiced teas have to be really particular to speak to me. However, I understand why we put out new Chai blends every year – it’s a very autumnal thing, and it makes a lot of people who aren’t me very happy. I can respect that! However, I’ll keep my note minimal because this isn’t a collection I’ve tasted a lot/will be tasting a lot…

I think this is a pretty well balanced Chai – it’s a little cinnamon heavy, like a lot of Chai from DT tends to be – I think this is because cinnamon is such a commercial flavour on top of being a spice that a lot of people tend to feel VERY comfortable and familiar with. However, aside from being slightly more cinnamon dominant it’s also got notes of ginger, cardamom, and a tiny, tiny bit of pepperiness. I think it’s got a lot of body, and has a really full and brisk flavour. The maple is present, but it’s not really all that sweet/intense – my first experience with this tea I was basically expecting it to be oozing sugary sweet and rich maple the same way that Maple Syrup Oolong does, but comparatively this is really subdued and less ‘sticky sweet’. If you were in the camp of people who found Maple Syrup Oolong too rich, this could be a better maple tea for you! Not to say it’s not sweet – but it’s a deeper, denser sweet tempered by the spice and a subtle, but aromatic, citrus note. It reminds me of “old school” DT blends a little bit too – like Glitter & Gold meets Maple Sugar!?

I’ve had it hot and as a latte at this point – I actually like it better hot because I think you get a bit more complexity. However, it’s still a damn smooth latte and I think that adds a nice thickness and creaminess to compliment the full bodied spices.

Not my favourite blend (as I said, I don’t do Chai very much) but I respect this one a lot compositionally – and I’m excited to see what other’s think of it!

Wow… I haven’t had to add a DT blend in quite a while! I’m sure Roswell Strange has tried this, though. I got a couple packets as a freebie the other day, as part of a sneak peek promo.

I’m a bit over all the various chais (I’ve found some I like, and some are so far off that it’s hardly worth bothering anymore), but this looked like it had the right ingredients, so I was interested to give it a try. Unfortunately, something in here doesn’t appeal to my tastebuds. I’m not sure if it’s oversteeped cinnamon becoming a bit sickly sweet, or the chicory root, or just this precise combination of ingredients – it just doesn’t taste how I’d like. (It’s not the maple syrup, or shouldn’t be – pure maple syrup is my sweetener of choice and I adore it). I’m leaning towards too much cinnamon, though. I suspect some milk and a bit extra maple syrup would make it more palatable for me, but I don’t have to worry about that, because my sample was just enough for a single cup, and now it’s gone! Or will be shortly.

Haha; I’ve not put it up yet because it technically hasn’t officially launched yet. I figured someone might beat me to it though, w/ the soft launch/sneak peak samples going out.

I find DAVIDsTEA’s cinnamon tends to be really sweet. Also, I get what you are saying about chais. I think chai is something that once you find one you like, best to just stick with that because it all depends on getting the right balance of so many ingredients. I am starting to think I should keep a random chai in my stash though because when people come over and want tea, they usually go “do you have chai?” and I have over 200 teas but not a chai lol