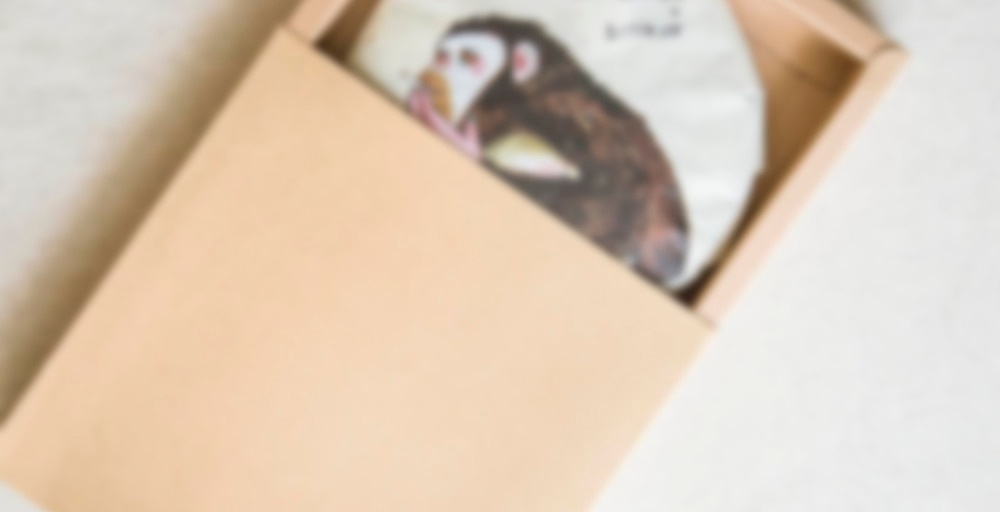 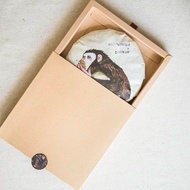 This Yiwu raw puer is one of our two Year of the Monkey puers. The material for this tea comes from a recently transitioned fang yang (“left to grow”) garden that receives minimal human interference. The tea itself has an initial and surprising honey-like sweetness at the front, which yields to some slight roughness and unique lasting aroma. With good cha qi/tea energy and a solid mineral fragrance that lingers, this is a strong candidate for storage.

Typical of Yiwu teas, this one is on the softer side of things, but still maintains a solid backbone with plenty to offer. This also makes it a very drinkable young raw puer, and well suited for beginners and experienced drinkers alike. Don’t be fooled though, Yiwu teas tend to age well, even if they seem lighter in their early years.

This is one of my oldest teas, as it came from the final “Here’s Hoping Teabox” which was the first teabox I joined as a newbie on Steepster back in… 2016 or 2017, I think? I finished everything I had from that box except a few pu’erh samples, as I always think to myself, “Age can’t hurt this!” and try to drink other things that are getting less and less fresh each day. But I failed my “one gong fu session a month” goal last year, and want to try that goal again this year! So I pulled this out to gong fu this morning.

My package simply says “Yiwu Sheng Pu-erh 2016” on it, and since this is the closest match I can find, I’m putting it here (if it is something else, apologies!)

The wet leaf has a really pungent aroma… smells like umami cooked meats, bitter fruit rind, hay, and minerals. The rinse had a strong aroma of sour fruits and hay. The first steep, after a bit of cooling, has a gentler aroma, and tastes surprisingly fruity and smooth… I’m getting a cooked stonefruit vibe, particularly plum, with a bit of a dry hay/herbaceous backdrop and a bit of minerality in the finish. The next infusion smells and tastes delightfully plummy, a little sour at first with a honeyed note coming forward afterward. I’m getting a sort of black licorice aftertaste on my tongue (which is fine by me, I’m one of those rare black licorice fans). That aftertaste becomes more of a mild muscatal note in subsequent steeps, with the sip continuing to be very plum forward, with a bit more florality/wildflower honey and graham cracker popping up in the taste. Around the sixth infusion the stonefruit notes disappeared and it became more of a mix of bitter melon, hay, herbaceous, citrus peel, and mineral notes. Steeped for eight infusions.

Pu’er and gongfu in one session? With no complaints of swamp or scalded fingers? Glad it wasn’t a terrible experience :)

Well, I did cheat on the scalded fingers by using a tiny, handled teapot. But yes, no dirt, swamp water, or ash smoke!

If tiny teapots are considered cheating, then we’re both chumps! Good notes you got there, btw.

I wish I kept some of this lying around for a while. Silly me, I drank it within the year it was released. I knew so very little about puerh, then.

Oh good, a puerh you liked! I had the “traveled too much to continue in the teabox” ziplock bag of teas in my hand a couple days ago…still working on them!

Here’s Hoping Teabox – Round Seven- Tea #46
A tasty sheng! Sadly as usual with sheng, I probably couldn’t tell any of the shengs apart in the teabox. Sheng is all so very similar to me. Occasionally there is a unique one. This was very sweet and light, almost a lemon flavor to it.

Just copying what I wrote on instagram, because I think I did a really good job capturing my thoughts/feelings there in words:

In honor of the massive Spring tea order that I just placed with Bitterleaf (like, $300+ dollars of tea), I’m sipping down their Year of The Monkey yiwu sheng pu’erh and munching on some starfruit. This tea is sweet with a syrup like mouthfeel; the top note has a striking note of anise/fennel bulb (so, somewhat green), but then it transitions into a tangy medley of tropical fruit & stone fruit notes: overripe pineapple, nectarine, apricot, and (ironically, given my current fruit pairing), starfruit! The finish is a little bitter, like an underripe banana.

This was a free sample I received from Bitterleaf, back when they were a very new company: I wasn’t far along in my pu’erh drinking journey at all and so I didn’t fully appreciate this tea. But, I held onto the sample and now I’m simply devastated to be finishing it off! Who would have thought that, given a few years, my palate would have changed so much and now Yiwu sheng would be my absolutely FAVOURITE type of sheng.

I very much look forward to trying this year’s pressing (Year of the Pig), and will always be kicking myself for not loving this one early enough to have bought a cake of it. That smoking monkey art is so good! One of my favourite cake wrapper designs, for sure.

Steep/Time: Notes
1/12s: Light and sweet with a very soft touch of astringency.
2/15s: Picking up some nice fruit notes. Plum, honey and currant.
3/20s: This opens up nicely. Very soft touch of astringency with great huigan. Sweetness throughout the tasting experience, though fruit note is now harder to pinpoint as something specific (plum, currant, etc). Great cup of tea.
4/25s: Thicker perhaps, but same as the previous… wonderful!

Have to cut this one short as I have to pack for a flight, but I’ll take some along with me! :)

Spent leaf: Olive to dark olive. No discolorations. Material was fairly broken but it was a tightly compressed sample and took some coaxing to break apart.

(Warning folks: This is my very first taste of a sheng and I’m having a good time with it! I’ve waited a long time to get some shengs and am looking forward to drinking through them and reviewing them all. Thank you to Bitterleaf Teas for including this as a free sample in my first order!)

Wow. When I first smelled the dry leaf in the bag, I imagined my nose was inside a bag of moist dried cranberries. The dried cranberry tartness of the dry leaf actually carried over into the cup. I got a nice sweetness and a mouthwatering minerality with no astringency – very pleasant. Overall, I really enjoyed this tea and will adjust my rating/recommendation as my tasting experience expands. Very much looking forward to trying this one again on another day.

03/10/17 Update: I’ve edited my tasting note after a second session with this tea using my dedicated sheng clay pot which I didn’t have when I first tried it. The clay pot plus a little more resting time seem to have made a HUGE difference in the brewing. My first tasting using my glazed gaiwan was ridiculously astringent and not very sweet. I believe time and the use of a clay pot really brought out the true flavors of this tea.

Wet leaves smell of freshly mowed grass and grilled zuchinni, with the floral notes returning as they dry.

Initial steeps were freshly mown grass and floral, with a bit of honeyed sweetness. A bit of nuttiness developed as it went on. Very vibrant and appealing, with a good bit of complexity. It’s really fresh and fragrant, and that sticks around through quite a few steeps.

I’d definitely get this one again. Punches way above it’s price range, both compared to other puerhs I’ve tried and just compared to teas in general.

The dry leaves were so fragrant and sweet. After the initial rinse, the inside of the pot lid smells like a summer day in my childhood backyard after the grass has been mowed. The taste is somewhat (not overly) sweet and not really bitter; mouth dries out after sipping by the second steep but just a little; third steeping tasting a little more grassy and less sweet, dry after taste; 6th steeping is grassier and a little more astringent; 9th steeping is milder with less grassy notes and astringency. Feeling a pleasant little head lightness in these last few steepings. No noticeable huigan.

Congrats on your first review! :)

We have all stood on the same ground. Keep on writing!

I’ve yet to review this?! Well, here it goes:

I really like this sheng. Yes, it’s quite young and will need some aging; however, I’ll have to get another cake soon to age. I’ve shared 80% of the cake with friends via swaps and locally. I’ve had two sessions with others in a small group setting; which one friend really clung to this and loved it (he’s getting the rest of the stash for Christmas (all the more reason to get more ;) )). I’m happy that I’ve had the chance to introduce this tea to others, as well as dip into it myself. I’ve a few grams left, so I’ll leave the rest for storing until I can get another cake. :)

Now, this session started late last night and I’m currently still steeping my way through the leaf. I’m having to push this tea a little currently, but the increase of time/temp is proving to draw the sweet notes, with a touch of bitterness, from the leaf. I do like the subtlety of the bitterness with sheng—and the sweetness that usually comes out of the leaf further into the session—however, this is reverse. I’m hoping to see where the leaf is at within the next few months, and will review it then too.

Received a generous sample of this with my Bitterleaf order. I’ve been seeking to expand my tea repertoire beyond green tea and oolong and this sheng was a great intro to the world of puerh. My puerh experience, while limited, has been a mixed bag. This is the first puerh I’ve not only liked but truly enjoyed.

The dry leaf is has a deep fragrance of brown sugar/molasses, flowers, and wet clay. The first few steeps were sweet, full-bodied yet light with lots of fruitiness. Low on bitterness and the earthiness that characterize puerh. Later steeps though became metallic, typical of a young sheng.

This is a nice tea for easy sipping. It’s gentle character will appeal to green tea drinkers and puerh noobs like myself. I can definitely see myself buying more of this tea.

This one is really one of the best bang for your buck puerhs of 2016 imo.

I thought I didn’t have any sheng samples left in my stash, but I was wrong. Perhaps this one is the last.