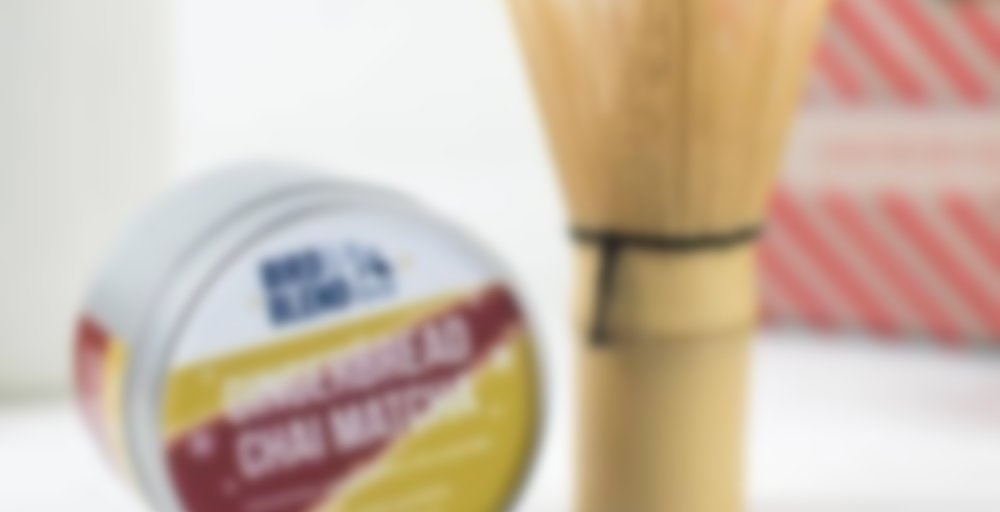 Our fans say: ‘Absolutely fantastic! I am a big fan of the chai flavours and this is another favourite.’ – Izabela

Warning: Contains liquorice root so we recommend people with hypertension should limit consumption to one cup a day

Warning: Packed in an environment that contains nuts.

Please check out our allergens page for any queries you may have regarding ingredients.

I finally got through the big bag of Healing Butterfly Pumpkin Spice Matcha (I reviewed it before so didn’t bother to talk about it again as is my norm, but if you are curious, that review is here: https://steepster.com/mastressalita/posts/396837 ) and I have a few servings left of my “autumn smoothie mix” (frozen cubes of pumpkin, frozen sweet potato, and frozen green apples) so I went digging through my samplers to see what else I had that would probably go with fine, and saw this one.

I was never a fan of B&B’s Gingerbread Chai tea… so much so I gifted the bag of it I had off on others. I love ginger, but it has to be well grounded because I’m very spice sensitive; if it burns the back of my throat rather than just producing a gentle warmth, then there is too much ginger, and that was always what I got from Gingerbread Chai. It burned. I was worried the matcha would pretty much be a ginger bomb like the tea, so I opted to froth it in vanilla oat milk, to add some grounding sweetness.

I’m glad I did; I can tell if I had used regular oat milk, this probably would’ve been too strong in the spice department for me. With the sweetness of the vanilla oat milk there, though, the ginger is a bit more tamed; definitely still has a bit of a kick, but drinkable even for a spice wuss like myself. Hard to taste much else against the strong ginger, though… maybe a touch of cinnamon? I definitely can’t pick out any matcha flavor beneath the spice, which caused me to double check if it was even there or if this was another of their “not-matcha” powders (it is a matcha/rooibos blend, so it is there, but probably not very strong to begin with…)

Anyway, matcha is not an evening drink for me, so into the morning smoothie it went after sampling. Not as rounded of a spice mix as the Pumpkin Spice Matcha, but the ginger tastes fine paired with the pumpkin. I think I’ll use the other half of the sampler up with a peach smoothie tomorrow, since ginger and peach sounds good, too, and I have a few other things I think I can make work with the “autumn smoothie mix” (B&B’s Toffee Apple? DAVID’s Pumpkin Pie or Maple?)

Yep, I think I was one of the ones to get B&B’s lovely Gingerbread Chai, thank you. :D

I haven’t been in to matcha lately but in talking with VariaTEA the oher day, realised i had a number of samples she’d sent my way that i ought to try and see how i feel about it again. This one wasn’t half bad. there was a nice ginger feel to it along with the chai. Had it as a latte, as i go all my matcha so i imagine the flavour was a little diluted from the milk. Still though, it was nice to have again, though this one didn’t change my mind about matcha! Thanks VariaTEA!

Drinking this one with a spoon because the matcha keeps falling to the bottom of my cup. It definitely has a crisp gingerbread sort of vibe to it because I get the hit of ginger but it’s also sweet/cake-y. I just want more molasses. More flavour.

…was it pudding-y to you?

More cake-y but also a lot of milk flavor. I used 1/2 tsp in 8 oz of milk and I think maybe it would have been better to use more powder or to make it hot.

Couldn’t resist trying this matcha/powder, it’s a really fun holiday flavour and I could see it being really nice as a latte. Of course, I didn’t end up making it as a latte but I still stand by that idea!

I thought this was pretty good overall – it definitely conveys what it wants to in terms of flavour. I’d have preferred a more dark/deep and molasses note for the gingerbread, but there was something that tasted kind of pudding-y to me that I weirdly thought worked quite well for the matcha. Ginger/cinnamon are the spice starts, supported by a hint of cardamom and a sweet liquorice root and honey (from the rooibos) finish. Avoid if you’re not a fan of liquorice, but otherwise it’s tasty!

Would I buy this for myself? Probably not since I have some spiced matcha from DT that is cheaper and more accessible for myself, and that’s not a flavour I crave often. However, no complaints and I would definitely drink it again!