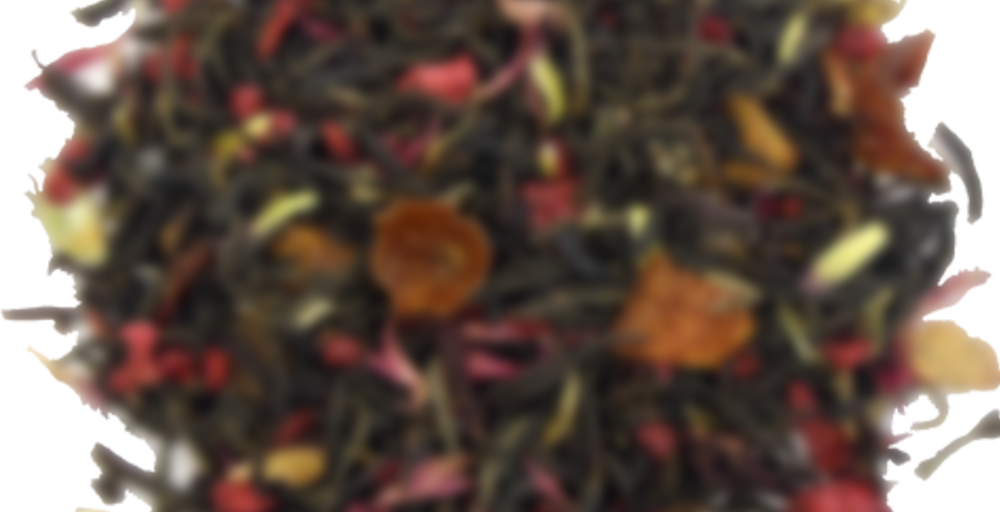 Nothing beats that classic breakfast combination of Tea + Toast in the morning! This blend captures it perfectly, with a traditional English breakfast tea base of Indian Assam and Kenyan black tea with a generous spread of sweet raspberry jam to boot!

I had been wanting to try both this and Violet Cream, and planned on getting them in the Boxing Day sale. Sadly they both sold out. But, I was lucky enough to have someone in the Bird and Blend FB group offer to send theirs to me. Yay!
The dry leaf is full of freeze-dried raspberry pieces, and is quite lovely to look at. Brewed, this smells like raspberries…and cheese. There’s a hint of soft, creamy blue cheese (like a cambozola). It’s not bad, just odd.
No blue cheese in the flavor. A nice, strong Assam at the forefront followed by a mild jammy raspberry.

I also wanted to grab this one and it sold out. I’m so happy you got to try it! :)

ah man, I’d love a bleu cheese tea. I didn’t notice that in this one though!

I received this as sample from Bird & Blend with their Christmas in July sale. It’s one I REALLY wanted to try. I love a good jam and a good jammy tea. I’m glad I didn’t use more than one heaping teaspoon, as the black tea tastes richer here than the usual black tea from B&B (which I think is usually Ceylon unless they changed it). That is because this one is a mix of an Indian assam black tea and a Kenyan black tea. The black tea itself is definitely for breakfast, even if the brew color is more red than black. The flavor is malty, bready deliciousness. I really appreciate the different black teas used here, but the strength might overpower much of the raspberry flavoring. I think it’s all in the luck of the teaspoon scoop though because I might be tasting more hibiscus than raspberry. B&B is usually really great at taming that hibiscus. Or maybe I just like a ton of jam. Overall, this one just isn’t the blend that I’d hope it’d be. I’m very glad the base isn’t the usual Ceylon, as that would be even more disappointing. Nothing magical here like with their Jelly + Ice Cream blend (which sold out almost instantly for their sale…. maybe they shouldn’t offer some teas only during a sale? Supply & demand sort of thing?) But I have at least one more teaspoon to try — maybe the magic will be there.
Steep #1 // 1 heaping teaspoon for a full mug// 14 minutes after boiling // 3 minute steep
Steep #2 // couple minutes after boiling // 3 minute steep

I found it really finicky, but when it’s right, it’s really right.

Hopefully the next cup is better…

This is the third of Bird & Blend’s summer collection, and the one that had me most intrigued. The name made me think it might be smoky flavoured (I was clearly thinking of burnt toast), but in actual fact it’s a raspberry jam flavoured black. I went straightforward for my first cup – 3 minutes in boiling water, no additions. I have to say, I love it! The base is a blend of Assam (my forever favourite), and a Kenyan tea, which together are malty and jammy in the best possible way. I taste the base first, before the “raspberry jam” flavour emerges in the mid-sip. It’s quite subtle to begin with, but somehow seems to develop towards the end of the sip until the raspberry is the main player. It reminds me a tiny bit of Butiki’s Ruby Pie (just a tiny bit, though – something about the raspberry), but also of Bird & Blend’s Vicky’s Sponge Cake; it’s like it takes the problems that blend had and smooths them over, so if you wanted to like that one and didn’t, this might be a better alternative.

The cup as a whole tastes like tea with a side of jam – not toast, so much, although I can see why they called it that. I suppose you could argue that the base tea provides a baked bread kind of flavour, but to me it’s all about the jamminess, and the choice of base teas complement and support that aspect of the flavour more than any other. I’m not sure I’d drink this one as a breakfast blend, although I guess I could be persuaded, but it’s definitely a mid-morning delight!

My second cup is actually a glass, because I took inspiration from Bird & Blend’s instagram and decided to cold brew 4 tsp in coconut milk. They say it tastes like raspberry ripple ice cream…

It does, in a way, although it’s heavier on the coconut (obviously! ) than raspberry ripple ice cream would usually be. It’s sweet and creamy, though, and the raspberry jam flavour does just about manage to make its presence felt. It’s a fairly close thing, though, and I think if I tried it again I’d probably use more tea – 6 tsp, perhaps, rather than 4. You wouldn’t know it’s a black tea, when prepared like this; instead, it’s got much more in common with milkshake. I think I prefer cold brewing in lemonade for clarity of flavour, but this is pretty yummy just the same!

I always appreciate you trying Bird & Blend’s teas for me. :D Also, this one is like Ruby Pie and a BETTER Vicky’s Sponge Cake?!? Whoa, I would love it.

You’re welcome! It can be both of those things, but a little finicky. I learned the hard way that it’s quite terrible if you leave it too long.