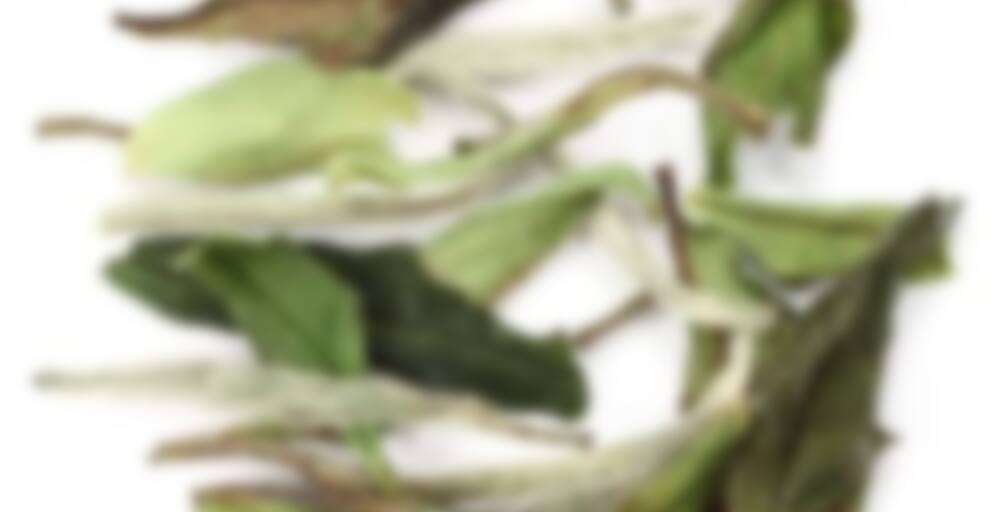 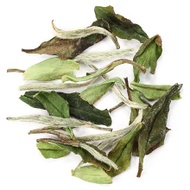 by Adagio Teas
75
You

White tea from the Fujian province of China. White Peony, also known as Pai Mu Tan, is a sweet, mild tea made from unopened tea buds, as well as the two newest leaves to sprout. The freshly harvested leaf is allowed to wither dry in the sun. The natural oxidation which takes place during this withering gives White Peony beautiful, plush flavors (not unlike an oolong, flavor-wise). The nose is warm, floral and rich like fruit blossoms. The liquor is golden and bright. Clean, succulent floral-fruit flavor and rounded mouthfeel. If you are beginning your exploration of white tea, or even just tea in general, our White Peony tea will serve a wonderful introduction.

Opened a bag of this today. It’s so delicate and beautifully floral, just perfect for this time of year. I’ve been resteeping the same leaves all afternoon (about 4 times, I think), and they were still going strong when I chucked them just before I left at 5pm. I like white tea in general, but this one never fails to impress me. Amazing stuff.

Okay, so the Sawadee stemed Darj was a fiasco, but there are other fishies in the sea. Here is one that came to me from Infusin_Susan and the amount of leaf was just right for a small non-sharing cup, although not for many short steeps, I don’t think.

This type has also been touch and go for me in the past. Either it’s tasted very floral and sort of cucumber/courgette-y or it has been slightly astringent with a strong note of nuts. I very much prefer the latter, really.

The aroma of this one is very much in the cucumber department with a few floral hints around it. At first sip, it’s very sweet, but then that cucumber-y notes start creeping up along the sides of the tongue and after just a few sips, I’ve got a strong aftertaste going on, reminding me a bit of the flavour you get if you take a sip of water just after having woken up. For some reason that just always taste a bit weird. The more I think about this one, the more I feel it has a metallic sort of tinge to it. Perhaps there is a smidge of nuts at the very, very top of the flavour, but not very much. Certainly not nearly enough to fit my idea of what I want it to taste like.

But on a positive side, it’s a decupboarding. We are drinking down the stash!

Now for the handful of other BMD samples I’ve got… I’ll finish this one off first though. It may not be anything particularly great, but it’s drinkable, which is more than I could say of the Sawadee.

OH! And I forgot to mention that yesterday’s expedition for bridal equipment was a success, and if anybody is interested in seeing a picture of the dress I chose, may add me on Livejournal or Dreamwidth (ask me for username) if they have an account there, and I’ll show you. Can’t do it here, because the boyfriend creature sometimes looks, and as far as he’s concerned, it’s a state secret. :D

You will be beautiful !!! When is the wedding?

May it be the beginning of a great life together. Stay sane in the meantime : )

I haven’t been on LJ in ages (thanks to my own wedding + school) but I’ll hop over there now because I’m so curious about your dress :D

So exciting! I have a long-untouched LJ filled with sad, mopey posts from my high school era, but I may have to relocate it, delete a few things, and snoop to see your dress!!

WIll do! It’s definitely under a different name…. hahahahaha :D

(Ok, I was getting a bit depressed going through my posts from 5+ years ago, so I just created a new account and added you. Same name as here. :D)

After several recommendations I only steeped this for 3min. Wow… still ncredibly dark. The liquor is a medium dark orange brown. Not delicate at all… and that makes me sad.

Pai Mu Tan (white Peony) is my current favourite. It is quite dark for a white. Lovely though

It’s quite dark even at 3 min so I don’t think I’d go more than that on the 1st or increase each one by more than a min. Thanks for the suggestion though.

3rd infusion, 5 min. Lighter liquor. More sweet. I could easily confuse this for an oolong.

“medium dark orange brown”? Wow… Mine always comes out more like light or medium yellow color and tastes very delicate. 3min @ 180F. Maybe I use less leaf though, I don’t weigh it, can’t tell for sure.

@Oolonga, Yeah really can’t tell ya then. I wanna try this around 160 once.

You’re probably using really hard water. Try making it with filtered or bottled water and see if there’s a difference. I noticed a HUGE difference in color when I started making tea with softer water.

Why do you guys brew tea for so long? White tea should be brewed for about 10 seconds, no more. I am astonished you brew such a delicate tea for several minutes then say “I’m surprised it’s heavy”!

Actually, I’ve seen very conflicting information about how long to brew white teas for. Some people say less than a minute, others say 15 minutes or more on the first infusion. There’s nothing concrete that I’ve read to persuade me one way or another. I’ve just had to experiment and decide what I like for myself.

I have a lot of White Peony on my shelves from different companies because it’s my favourite white tea and it’s high time I started to drink it up. From Adagio I only have a 9g sample to try.

I was disappointed to see that my leaves are no where near as fresh and green as they are in this picture. Instead they are brown and almost completely broken down, dry and brittle. There are some silver tips amongst them but also a lot of twigs/stems. It has a strong peony scent that is very thick.

Once steeped the tea is amber in colour and has a mild sweet floral aroma. Flavour wise it’s nutty, woody, floral and sweet. It’s not as bad as I thought it would be but it’s by no means good quality. It lacks any real peony flavour, it’s not as sweet or delicious as it should be.

I’m glad I only bought a sample pack of this. I think I will stick with Teavivre and NothingButTea when it comes to White Peony.

A short and unsophisticated little note about this tea:
Our housemate doesn’t like hot beverages, but does like looking at the tea I make, so earlier this week I found a nice cheap pitcher to make iced tea for him. Last night I brewed up my sample of this as iced tea, and we both tried it today.
Success! Not a lot of sophisticated flavor, but as an iced tea it’s very refreshing, and reminds me of those bottled ItoEn teas that are all over San Francisco. They all taste the same to me even though they’re supposed to be different teas.
The housemate is happy and has been enjoying cups of iced tea today!

This is the second in the Adagio white sampler. I cracked it open a long time ago when I needed some white peony to make up a full cup when I ran short on another sample, but this is the first time I’m tasting it on its own.

In the sample tin, there’s a grassy, hay-like smell with notes that are both earthy and sweet. The leaves and buds are large, silvery green, and fuzzy. There are some twiggy stems in the sample as well.

I’m not following the Adagio steeping instructions as they seem to be too hot and too long, and with the time and temp I’m using I get a pale yellow, clear liquor and a dewy aroma. It’s like nectar, slightly floral, and slightly rain-like. Very pretty.

And that’s pretty much what I get in the taste, too. A very very subtle, nectar-like, rain-like flavor. It’s nice, but it’s not what I expected at all. I expected a lot more flavor. I’m wondering if I really am meant to cook this one some.

It’s quite a subtle flavor as I’d expect from a white tea. I’d hoped for a bit more complexity but it’s nice enough and I’m enjoying it more than my memory of my Silver Needle experience. I am not rushing to reorder, though, as I have a lot more White Peony samples to try and this one didn’t bowl me over out of the gate.

The dry leaves smell just like hay, but that’s a positive for me (I grew up riding horses). The brewed tea has a light hay smell with an added component. The tea, I’m assuming.

Wow, this tea is interesting. I’m getting so many flavors! One of the flavors is almost like lightly toasted pumpkin seeds. Yum!! Of course, now that I’ve picked out that flavor and identified it, I can’t taste anything else.

Mmm, but this is good. Really different from any of the other teas I’ve had. I’m not even sure I’ve ever had white tea before! This might be my first!

I didn’t know what to expect, but I guess I thought it would be like an oolong. More vegetal, but less grassy. That’s what I thought anyway.

This isn’t grassy or vegetal at all. It’s a unique flavor all of its own. I’m really impressed, and I think I’ll be drinking this a whole lot more. First white tea is a success!

I like this tea quite a bit. It has a darker color than I expected, definite honey aroma. Clean taste.

Very nice color, just sort of surprised me. Thanks!

This is a sweet, yummy white tea with very little grassiness. I’m not really feeling the comparisons to Silver Needle; Silver Needle to me has a much more buttery, round taste, and is a lot smoother. Still, I like this, though I’m not huge on white tea (except for SN, of course).

OK i got this in teabags and it’s called Pai Mu Tan but ill log it here anyways. Should be pretty much alike.

Smells of dry tea is very herbal in a nice way. Leaves look well half like silver needle and the rest just looks like dry leave chunks.
I’m expecting to like it…
Tea is clear yellow and smells like hay or something. Like a farm with sheep’s lol.
Tastes quite similar to the smell. It has a nutty thing about it. Slightly. That I love. It also has a slight acid note.