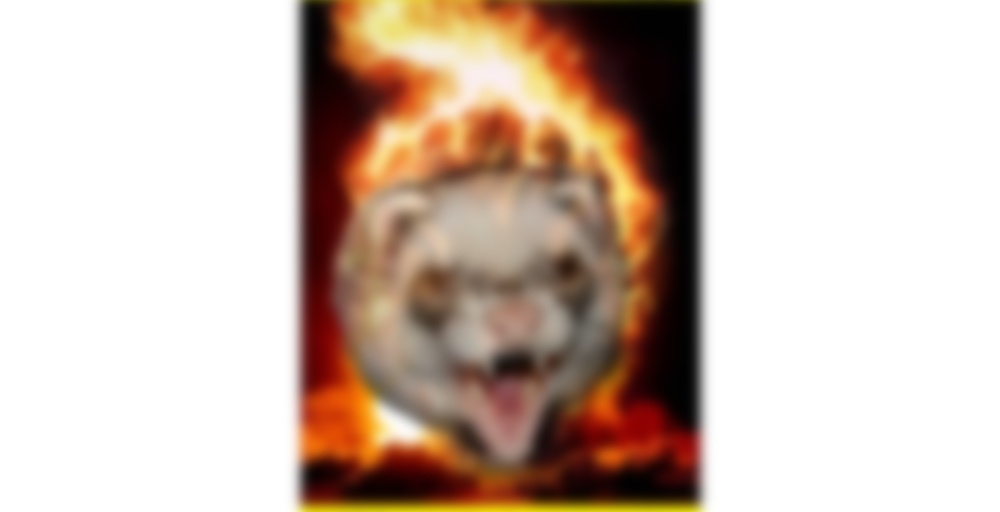 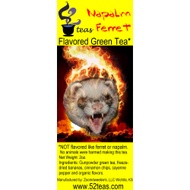 I apologize if this disappoints anyone, but this week’s tea tastes like neither napalm nor ferrets. And no animals were harmed in the manufacture of the tea.

Instead, what we have here is a tea blend from the warped imagination of one of our former tea bar customers. I’m honestly not sure exactly what it means or why it was so important to him, but then, that’s kind of the way a lot of the conversations at Zoomdweebie’s went for me–a bit over my head: like, outer space over my head. But that’s okay.

After explaining to me that he really wanted me to make a Napalm Ferret tea, Joe and I sat down to determine what exactly would constitute a Napalm Ferret tea. He decided right away that it needed to be a gunpowder base, with bananas because ferrets like bananas, I guess. It also needed cinnamon chips and just a touch of cayenne pepper. And that is how Napalm Ferret tea was born.

If you would like to support our effort to reopen Zoomdweebie’s Tea Bar, so that creative minds like Joseph’s can continue to thrive in a groovy environment like our tea bar, PLEASE visit our crowd-funding campaign page via the link above. Alternatively, if you think folks like Joseph should not be left freely wandering the streets, PLEASE support our crowd-funding effort so we can corral him with the rest of the freaks and geeks that make up Zoomdweebie’s. We promise, they’ll likely spend a lot of time at the tea bar and less time wandering the streets thinking about napalm ferrets and quoting Charlie the Unicorn.

For what it’s worth, this is actually a very unique and delicious tea blend.

Get yours today at Zoomdweebies.com!
Just $8.99 including shipping to the US!

Well, I’m a little happy and a little sad – for a couple reasons.

Tea related, I thought this was going to be a sipdown so I was excited to lower my number of teas but as I measured everything out I realized I had just enough leaf for two cups and I decided that I’d better not just overleaf because the flavour of this one is pretty damn strong. So that makes me sad about not getting in another sipdown, but happy because this is kinda growing on me (though still way too strong for an everyday tea), and it means I get more of Frank’s Banana ;)

But yeah – basically this is the spiciest tea I’ve ever encountered and I both love and hate that about it. it’s super peppery and definitely needs to be paired with something that can tone it down, in addition to the banana in the flavouring which already does that to some extent.

I would only recommend this to someone who really enjoys spicy things.

Also, the other happy/sad part comes from the fact I just finished all of the episodes of Bones currently on Netflix. I still have to watch the Season 9 episodes but without a regular computer it’ll take a while for me to do that. Now I need to find something else to spend my time watching on Netflix – since that’s what I do when I don’t have the computer. Maybe Nip Tuck? Anyone else watched that?

And – Tre also just made fun of me for eating popcorn with a spoon. I’m doing it for his sake, though. I didn’t want to get globs of butter all over his laptop.

We used to watch Nip Tuck. Very edgy for its time. Characters you love to hate, lots of stuff done for shock value, that sort of thing.

I also get sad when I finish a show on netflix. I just watched Firefly and that was good. I also enjoyed House of Lies. But both are only one season on Netflix. I also really like Heroes which they recently put on there. I have considered Nip/Tuck but never got around to it.

Tony & I just recently finished a month long obsession with the first 8 seasons of Supernatural. Now we’re playing catchup on all of our regular shows, including Bones. I loved Heroes, hahaha.

I’ve seen Heroes (watched that one live too – though I found it deteriorated), and Supernatural. I also watched Firefly ages ago, I may re-watch it. Breaking Bad, Once Upon a Time, and Merlin are also up for consideration.

I watch OUAT though it is pretty hit or miss. Breaking Bad is something I am considering as well. I watched a couple episodes of Merlin and didn’t really get into it. Though I did watch it with divided attention.

If only frank knew his banana was so popular….!;)

Today’s Christmas tea from 52 Teas. This was one that I also wanted to try from this years releases.

This tea smells very dry and spicy but with a strange yet fitting sweet banana tone in the background. It was spicy enough to make me sneeze when I took in a deep sniff of it.

The pepper is strong and fiery as the name suggests but it gets softened quickly by the sweet banana. The banana tastes delicious, Frank does excellent banana flavours in his blends. It tastes like I imagined a spicy banana bomb pudding would (banana napalm bomb pudding). The cinnamon is very strong in the after taste..or after burn as my husband put it.

A nice and unusual tea, glad I got to try this.
Happy Holidays everyone!

A weird one for Christmas Eve!

It really is. :P Not what I would have expected, but maybe tomorrow’s tea is super Christmasy?

I knew I would not like this one because of the ingredients, but I am still going to try it.

On initial sip, there is a burning in the back of my throat from the cayenne pepper, but it disappears really quick. That’s the napalm I’m assuming :)

After the cayenne wears off, there is a very ripe banana taste. I am not a huge banana or banana flavoured type of girl, so that is why I assumed I wouldn’t/don’t like the tea. The banana taste disappears really quick as well, then the cayenne comes back in the aftertaste. Double napalm!

The banana and cayenne work really well with the gunpowder green tea. The cayenne does mellow a bit as the tea cools.

Not my taste, but this is a really neat idea and really well blended tea.

Peppers with a bit of banana and smooth gunpowder green turns out to be an interesting combination. Sis and I sipped away at this last night without coming to any major conclusions. If this tea was available all the time and I had easy access to it I’d probably pick some up every now and then.

I loved this blend. I love the laugh I got from the label (Not flavored like ferret or napalm, no animals were harmed making this tea). I love Frank’s humor.

A cinnamon-y tea. I like the sweet banana contrasting with the spicy cayenne, and the smooth, buttery green tea base.

On the eleventh day of Christmas, 52 Teas gave to me…Napalm Ferret!

This is one I was interested to try this year, but which I ultimately kept away from due to the cayenne pepper. I like 52 Teas Smaug, as the cayenne in that is quite gentle, overall. I really did not like Mayan Chocolate Chai, though (what a disappointment that was!), and I was worried my experience would be similar here. I’m glad to have the opportunity to try it, though.

The cayenne is quite strong. It catches the back of my throat on first sip, although there’s not quite enough of it to really burn. I like spicy things, so possibly we will get on after all. The banana is a very clear flavour, and that I like. Frank is good at banana, and it tastes natural and sweet here rather than artificial or candy-like. It tempers the cayenne a little, too, cutting off some of the sharpness of the spice and rounding out the sip with sweetness. I’m not really getting cinnamon, or green tea — the cayenne and banana almost completely mask those. I did brew this quite conservatively, though, mostly out of fear, so possibly a longer brew time would bring those flavours out. Something to try next time.

On the whole, this isn’t one I’d look to restock. I can’t help but think that a banana cinnamon tea with a green base would have been more to my liking, but then it couldn’t be called Napalm Ferret. I don’t mind cayenne, but it seems pretty unnecessary here. All of the other flavours have to compete with it, and naturally they ultimately lose. This is undoubtedly an interesting tea, though — and a brave choice for a Christmas box! Totally unique, great name — there are a couple of things to love, at least.

This is the last tea in the 12 days of X-mas Sampler before the surprise Christmas blend. So that would make this, what….? Eleven pipers piping?

I accidentally oversteeped this one quite a bit because the microwave timer which I usually use for my tea was being put to use timing a pie I had in the oven. It doesn’t seemed to have harmed the tea too much, perhaps due to the robustness of the gunpowder base. Or maybe all the heat is just killing my taste buds.

And here I thought that the Mayan Chocolate Chai and the Flaming Chocolate Maté were spicy. They got nothing on this tea. I think it’s the combination of the cayenne pepper with the cinnamon that gives this blend extra bite. Though heat dominates the blend I can taste the banana sort of as a fruity aftertaste in the back of my mouth. It would be nice if it were a bit stronger I think – or the spices were a bit weaker. An interesting tea altogether, but I don’t think it’s really my thing.

Wooof I was definitely nervous to try this tea. I got it because I have a ferret named Archie. The aroma of the dry leaf smells like cinnamon and bananas. The actual tea tastes like bananas and then WHAM the pepper comes out. It’s a good tea but I think I’m gonna save it for when it’s ridiculously cold.

Post-Steep Additives:
natural sugar
not much change, it is now watery sugar with cinnamon

For those who like it hot, this is definitely the tea for you! The combination of cayenne pepper and cinnamon create this bold yet savory heat that pairs perfectly with the sweetness of the banana. The choice of Gunpowder green was an ingenious choice as it adds just the right amount of smokey goodness to the brew. My hats off to whomever dreamed up this mix as it’s beyond addicting and makes a truly amazing cup.