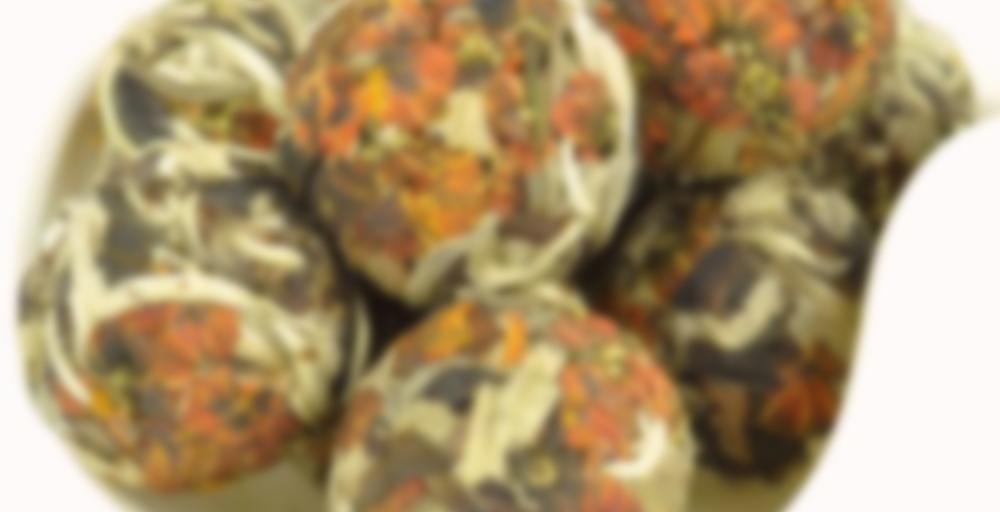 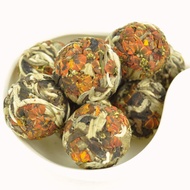 This is our first blended Dragon Ball tea! It’s made from Yunnan Large Leaf varietal tea in Jinggu. The tea was picked in Spring 2017, wilted slightly and then dried with warm wind tunneled through the tea until it is dry. The tea shares a somewhat similar look and taste with white tea when it is young but over time will develop into something closer to red tea (hongcha).

The Moonlight White “Yue Guang Bai” Tea is mixed with fresh Spring 2017 Snow Chrysanthemums which gives it a lovely honey and spice taste, which is never overpowering and blends harmoniously with the white tea to create something unique and delicious. It’s thick and expansive on the tongue, soothing to the throat and calming to the nervous system!

This was another sipdown from August. It was also the first of the Yunnan Sourcing tea and flower dragon balls I tried. It set the bar pretty high for those that followed, although I can now safely say that it was not my favorite of the bunch.

Prior to the rinse, the dry dragon ball produced aromas of chrysanthemum, dill, hay, malt, and sugarcane. After the rinse, new aromas of wheat toast, cream, butter, vanilla, and grass appeared. The first infusion introduced aromas of orange zest and straw as well as a subtle eucalyptus scent. In the mouth, the tea liquor presented notes of chrysanthemum, hay, dill, cream, butter, malt, and wheat toast that were backed by hints of straw, vanilla, orange zest, grass, and sugarcane. The subsequent infusions brought out aromas of autumn leaves, oats, lemon zest, and anise as well as a subtle pine scent. Stronger and more immediately noteworthy impressions of orange zest, sugarcane, straw, grass, and vanilla appeared in the mouth alongside impressions of anise, oats, lemon zest, minerals, and autumn leaves and hints of black pepper, eucalyptus, cinnamon, and pine. As the tea faded, the liquor emphasized notes of minerals, wheat toast, chrysanthemum, orange zest, malt, cream, hay, and butter that were complimented by a late, sugary honeydew note and hints of dill, vanilla, grass, straw, autumn leaves, pine, sugarcane, lemon zest, and anise.

This was a very interesting tea. Though the characteristics imparted by the chrysanthemum buds did occasionally overpower the base tea, there was still just enough strength from the base to keep things from coming unglued. The chrysanthemum buds and the moonlight white tea actually played off of one another quite well, as the tea neutralized some of the more vegetal impressions of the chrysanthemum buds, while the chrysanthemum buds softened and smoothed out some of the grainier, more savory notes of the white tea and injected some gently invigorating spiciness into the mix. Though I would have liked to see a little more balance, especially in the early infusions, this was still a successful blend of more or less complimentary components. Fans of both white teas and floral infusions would probably be satisfied with it.

This tea was from my almost entirely snow chrysanthemum infused tea Yunnan Sourcing order, and I was really excited to try this one! I’m feeling SO exhausted right now as I write these tasting notes though – I think I’ve done more than twenty today, and I am feeling TAPPED OUT. So, trust me when I say that this was super pleasant tasting and really quite nuanced, unique and incredible – I just don’t quite have the energy needed to nicely articulate that.

Around seventeen infusions though – I really wanted to get every last drop of flavour out of this tea! Here’s the short little blurb that I wrote on instagram what I posted the photo there last week: “Thick mouthfeel, + notes of hay, thyme, orange peels/zest, creamed honey, and floral undertones.” I want to add too, though, that later infusions were a lot more basil-y and minty as well, which was such a cool and delicious note to be observing in a tea like this.

Ultimately, it captured my favourite parts of the Snow Chrystanthemum black teas that I’ve tried – but amped up the herbaceous notes. Soooo good!

Like many other teas with chrysanthemum, these dragon balls have a honey-like sweetness accompanying the delicate white tea flavour. An additional peppery flavour makes for an interesting brew that altogether reminds me of a spicy chamomile, perhaps with light notes of mint. Definitely an interesting tea. The liquor is a beautiful golden orange colour and coats the entire mouth and throat leaving me salivating.