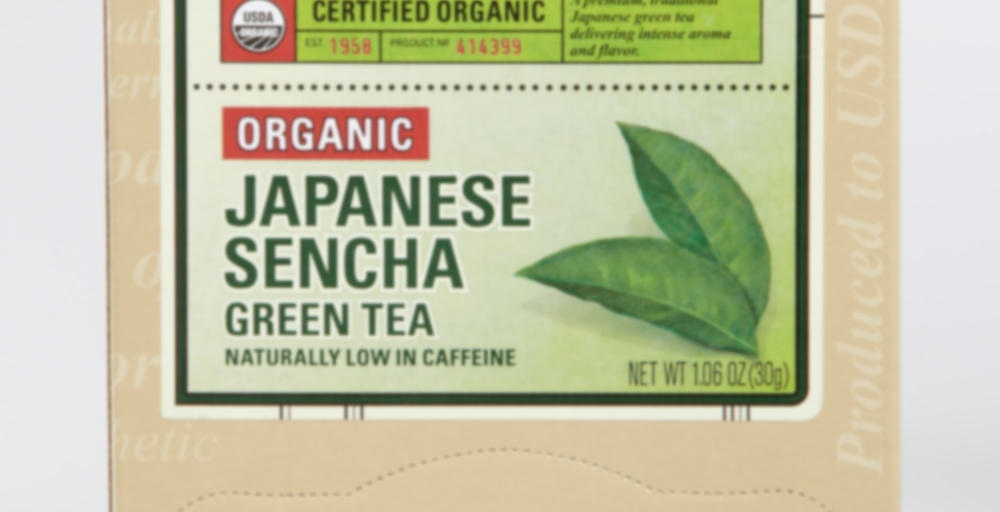 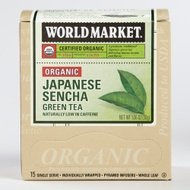 by World Market
78
You

World Market® Organic Japanese Sencha Green Tea is a premium, traditional green tea that delivers intense aromas and invigorating flavors. Like all of World Market’s master-blended organic teas, this tea is bagged in biodegradable, pyramid shaped bags that create a three-dimensional space more conducive to extracting the best flavor out of full-leaf tea.

I bought this tea along with the Pu-Erh yesterday. I’ve never had Sencha in Sachets before, so this is new. I do like the fact that sachets don’t effect the flavor of the tea.

Leaf Quality:
The leaves were very brittle, and could turn to powder at the slightest touch of the finger; this happened to several of the leaves, but most were still in-tact. They smelled very sweet, almost like honey, and a bit floral. The brewed leaves also smelled sweet, but vegetal notes crept in.

Brewed Tea:
First Steeping
The tea was a very faint yet bright yellow-green. It tasted sweet, somewhat vegetal, grassy, and a bit floral as well. At the end of the sip, I got notes that reminded me of barley, but turned into an orchid (very drastic change!), which puzzled me a bit.
Second Steeping
The second steeping was very much the same as the first, surprisingly. It did not change much since then. However, I did notice that the brewed leaves smelled extra sweet this time, and I did not get the barley taste. This tea is pretty good.

By the way, I finally got the 2011 production of “Atys” thanks to a friend, who even went as far to upload it on Youtube (Unlisted, however). I just can’t get enough of great Baroque music. I’ll be enjoying it with this nice tea.

Last night my boyfriend’s aunt put a box of this tea in my Christmas stocking. I was so touched that she actually remembered that I like tea :-p Maybe she just asked my boyfriend behind my back, but it was still a great choice!

So I don’t have a refined tongue that can tell the difference between one sencha or another, but this is definitely the best I’ve had in a tea bag form. The flavor is strong with only a single minute’s steep, which is fantastic. It’s green and vegetal, with that fabulous roasted grass flavor. (Well, that’s the best way I can think to describe green tea to other people :-p ) I imagine drinking this tea with milk and I think it’d taste like green tea ice cream. If I had some milk, I’d try that out right now.

It’s really neat to see how the tea leaves expanded in the pyramid bag. When it was dry, the little leaves barely filled a third of the bag’s space. Now, after soaking for a minute, they’re pushing against the walls of the bag on all sides. There’s a lot of little fannings, but there’s some nice big leaves too. Pyramid bags are so cool – you can see all the action clearly!

I mean, loose leaves should always be the way to go, but for convenience it’s hard to argue with a teabag, and this World Market store brand ain’t half bad.

I haven’t had anything lately that wasn’t something I already talked about on here, but I’ve been working my new Mickey head tea ball, a late Christmas gift from my BFF, and I love that thing! It makes it easier to bring my loose leafs to work with me! The ball has Mickey ears and it even comes with a Mickey head tray, all stainless steel, my favorite steel in the microscope! My BFF, she knows me! :-D

I’ve had many senchas in my lifetime; in Japan and in the United States and I have scarcely found one I didn’t like. I love going to World Market, I even tried to get a job there several times. Almost all the World Markets I’ve been to have great service and great products. This tea didn’t disappoint at all. Most Japanese tea comes in packaging that can be cryptic to understand for those who are just starting to get in tea, but this looks perfectly accessible. It is a great introduction to Japanese tea for anyone that is just starting out. This tea has all the trademark grassy and sweet flavors a sencha should have. Goes great with fruit or something else sweet!

I got some of this as an experiment of sorts. I’ve been enjoying loose leaf tea so much the past few years I haven’t really bought anything bagged for quite a while, but I needed something I could travel with that wouldn’t make a mess.

This…does not taste like sencha to me. I’m not sure what it is, it’s not the fact that it’s bagged, because I’ve had green tea from Starbucks (that I think is Teavana?) that’s tea bags and it has that umami/grassy green tea flavor. But this tastes, well, I’m not sure what it tastes like. Like hot water with some straw in it? I’m not sure, but I don’t much like it. Well, I don’t hate it exactly, and I’ll finish up the box, but.

It’s funny – I’ve seen two tasting notes in a row from people mentioning World Market. The other person is gmathis, who is in southwest MO. Maybe they live close to you!

Southwest MO—I’d bet they’re within an hour or two drive of here. :D

Yeah, Starbucks did buy Teavana. For bagged tea, Mighty Leaf is tasty. They have 5 different varieties of green.

This has been my favorite sencha so far but I haven’t tried many. Light fruity and vegetal.

Advertised as having a “juicy mouth feel!” Lives up to its claim, I guess