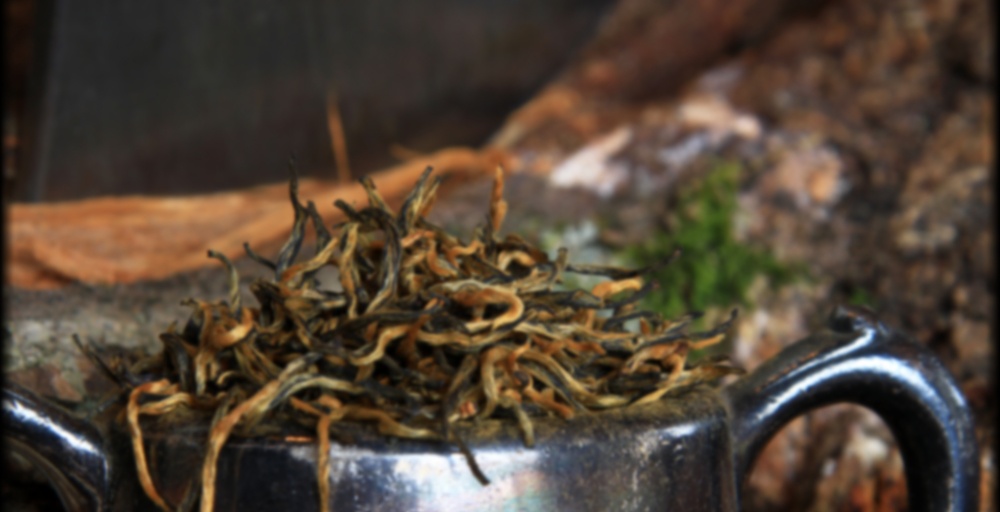 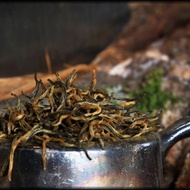 by Whispering Pines Tea Company
85
You

This tea comes from southern Yunnan and is picked once a year in the early spring. The harvest utilizes fresh buds to create a flavorful and very sweet tea. The dry leaf aroma is malt, milk chocolate, wildflowers, and apricot, and the wet leaf hints at a deeper cocoa as well as oak and maple wood. The mouthfeel is silky smooth and clean, opening with dark oak honeydew and milk chocolate. The middle is full of cream and malt and the finish brings forth notes of wildflowers and apricot. Later infusions hint at stronger stonefruit and a mouth-coating nectar-like quality is always present. Currently my favorite Yunnan black tea!

I started this in the morning and well, due to many things, my gongfu session was broken up, and one of my cats stepped on my phone and I lost count on which steep I was on, blahblahblah lol. So I restarted a new one.

The tea leaves are really pretty, mixed colors with gold in it. When I opened the package, the dry tea leaves smelled like hay, sweet hay. In the cup, the dry leaves had a malt, cocoa aroma, less hay. After the rinse, the lid and leaves had a nice cocoa, malty aroma.

As I continued, other things came in… Hints of citrus and their rind, stone fruits aroma and flavors. The lid smelled of honey, brown sugar and molasses. As I progressed, I didn’t get lots of chocolate, I did get some in the beginning. There was always a lot of malt notes. (It could be because last night I had their Cocoa Amore which has an abundance of chocolate. Everything is relative. hehe) The aroma was progressively getting stronger in fruits, particularly stone fruits. I didn’t get the tart apple or honeydew as described and unfortunately I have no idea what wildflowers taste like hehe.

The mouthfeel changed from silky, creamy to clean… Not a lot of astringency nor bitterness. It had a long finish no matter what infusion I was on, and as I was sitting here reading the reviews, I could smell orange, orange rind, cherry, stone fruits and molasses on the inhale-exhale well after I finished the infusion. In the middle of these infusions, it reminded me of the Moonlight raw pu’er from Teavivre because of the strong presence of stone fruits but with lots of malt and some creaminess. All in all, it was a good several cups of tea.

I received this as a freebie with my latest order. Thanks! The envelope says Spring Harvest with no year indicated and the website states Spring 2017. Who knows.

This tea struck a very positive and uplifting note with me but is a one-hit-wonder following the recommended brewing parameters of 1 tsp, 8oz, 212F, 3/5 minutes. I even did a third steep at what was going to be 8 minutes but turned into 11 due to forgetfulness.

The dry leaf is a sight to behold, full of twisty brown, black and gold needles that smell only of malt and sweet potatoes. The aroma of the first steep promised an exciting session with scents of orange, moss, orange blossom, molasses and milk. Indeed the first steep tasted wonderful, possessing notes of orange, walnut, mossy wet river rocks, milk, malt, light brown sugar and non-spicy ginger. The mouthfeel was smooth and milky, like 1% milk. There was a lively energy in the mouth. I was instantly warmed from the inside-out and happy.

Unfortunately, the second steep fell flat. The aroma of the liquor lost everything but the orange. There was an addition of orange zest and light ginger and the milk faded. The body became very light and watery and the mouthfeel slightly tannic with tastes of orange, apricot and wood. I wanted more than this so I went for a Hail Mary third steep. Sadly, even after 11 minutes, I was left with a nose of orange zest and orange and a taste of apricot. Very watery. There were no lingering tastes, but as I write this review, I notice a pleasant kind of watery, sour apple mouthfeel. I will say it made an excellent post-dinner drink that complemented my salmon, rice, broccoli and sweet corn.

This would be the perfect tea for those gray and frozen winter days when you need a ray of sunshine. I’ll move this one to the back of the drawer for now. Hopefully some light aging will work its magic and allow for some longevity and cocoa notes to develop but I feel like realistically it might not happen.

Edit: I think I was too harsh on this tea. Ratings are tough without clearly defined criteria and I sometimes think about dropping that habit. That said, I’m not ready to drop the habit yet. I was disappointed to not pick up on any of the chocolate I’ve gotten in other dianhong teas. There’s something really nice about this tea that I can’t define. Some of the best things come in short bursts. Increased rating. Still going to let the tea sit for a while.

Ok, so I need to get caught up on posting some tasting notes….
This one seemed to have some almost Darjeeling or Assam characteristics, I do not drink Indian teas much, but that was the impression.
Nose; sweet potato, light honey, home made chicken soup, light malt.
Palate; Brown sugar, sweet potato, very light floral, slightly bitter.
IMHO nice, but nothing out of this world.

After I finish with this review, the backlog will be empty once again. I’m sure that some of you who may stumble across this review know the tremendous sense of relief that comes with catching up all of your work. Part of what kept me from reviewing this tea sooner was that I made a point of trying to really savor it. I also pushed myself to see how it reacted to multiple methods of preparation.

Prior to the rinse, I noted that the dry tea leaves emitted pleasant aromas of dark chocolate and malt. After the rinse, I noted more pronounced aromas of dark chocolate and malt accompanied by hints of brown sugar and orange. The first infusion produced a similar, albeit slightly more integrated aroma. The mouth was dominated by dark chocolate, though I could detect impressions of sorghum molasses, malt, brown sugar, and wood just beneath the heavy chocolate flavor. Subsequent infusions introduced a fruitiness and creaminess on the nose and in the mouth. The dark chocolate, brown sugar, malt, wood, and sorghum were joined by impressions of cream, orange peel, and black cherry. Later infusions emphasized the wood, malt, and cream impressions, though traces of orange peel, sorghum, and dark chocolate remained. I noted that a slight mineral presence emerged both on the nose and in the mouth, as did a somewhat distant impression of black walnut.

In the end, I was very pleased with this tea. I found it to be very sophisticated, yet also very approachable. While I do wish it had a little more bite, I think fans of smooth, nuanced black teas will find a lot to love about this one. I would have no problem recommending this tea to anyone searching for a high quality Chinese black tea with plenty of character.

I’ve decided to up my rating on this tea. I’ve been drinking it a lot recently (cold weather always makes me want tea) and I haven’t really been noticing that odd taste when it cools down like I did before. Not sure what happened there.

There are others from Whispering Pines I prefer more (Golden Snail or North Winds), but this is enjoyable in its own right.

Brenden gave me a 5g rolled ball of this to try out (The Spring 2016 harvest, I imagine). And holy cats this is good. It has a very sweet syrupy scent to it mixed in with the malt. Almost like a pancake and syrup breakfast. The taste is just as good. While not quite as sweet as the scent on the nose, it still has that signature malty sweetness. I would venture to say the taste of it is close to a honey than syrup. Still delicious either way. And it lasted a good 6 or 7 infusions with solid flavor while brewing gongfu style. This is what I look for in a black tea.

This is for the Spring 2016 harvest, generously provided in sample size with my recent order.

Holy cats, this is an awesome tea. This reminds me of all I adore in golden tippy teas. The malt, the cocoa, the cream. This one has a smooth, rich, buttery feeling to it. A truly exceptional harvest with what had to be some masterful processing. Second steep was not as mind blowing, but I did steep the first cup for at least 4 minutes, Western style.

Another one from this afternoon. I’m looking forward to focusing on just a couple of teas next week while on vacation but i’m glad to be playing around with a few variations of tea today. I’m going to miss the variety even if it means i’ll get a few sipdowns in on older teas haha. This one isn’t my favourite from WP but it’s a relatively decent tea. I’ve had it a few times now and though i likely won’t restock, it’s certainly been enjoyable while i’ve had it.

Got this as a sample from an order I placed at the end of last year. This is a very interesting-looking tea, and the dry leaves are fuzzy little twists that expand impressively upon brewing. A little bit goes a long way, and I found that just a small pinch can make for a satisfying cup. The leaves give off a golden color in the cup that tends to settle toward the bottom. The taste is malty, baked-goods-esque, with quite a luscious feel and a hint of cocoa. It’s a very comforting tea, and the maltiness is not as imposing as Golden Snail—it feels a bit fresher and more delicate. I can see this becoming one of my all-time favorites, especially in autumn and winter.

Both this and Golden Snail sound awesome.

They are both lovely! This sample ran out too soon ;)

Aww, always wish the samples you end up falling in love with were bigger. :)

Sipdown. 8oz, 3,5 and 8 min.
Overleafed and under watered the first cup so it was strong and slightly tannic. Fixed the later steeps with more water.
Malt, cocoa, sweet. Solid black tea