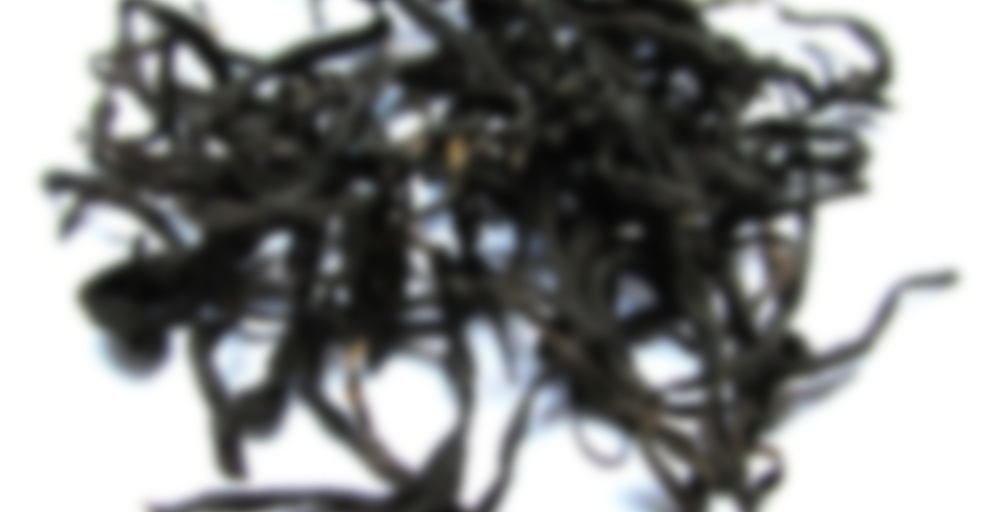 Here is my last review of the day. This was another recent sipdown of mine. I finished the last of this tea Monday afternoon. For the most part, I am a huge fan of Georgian black teas, but I quickly came to the conclusion that this one was never going to be one of my favorites. Though it was a good tea for the most part, I did not feel that it compared favorably to some of the other Georgian black teas that What-Cha has stocked in recent years.

Rather than gongfuing this tea, I opted to brew it in the Western style. After rinsing the leaves, I steeped approximately 3 grams of loose tea leaves in 8 ounces of 194 F water for 5 minutes. Normally, I do not resteep black teas that I brew in this fashion, but I opted for a second infusion with this one. The second and final infusion was 7 minutes, and 194 F water was again used.

Prior to the rinse, the dry tea leaves produced subtle aromas of raisin and pine. After the rinse, I found aromas of roasted almond and malt that were underscored by a faint smokiness. The first infusion brought out aromas of cream and steamed milk along with subtler scents of cinnamon and orange zest. In the mouth, the tea liquor presented notes of raisin, malt, roasted almond, cream, steamed milk, butter, pine, toast, cinnamon, oats, and nutmeg that were accompanied by hints of date, smoke, pear, and orange zest. The finish was very smooth, emphasizing cream, raisin, malt, oat, and toast notes. The second infusion offered steamed milk, cream, malt, roasted almond, toast, butter, raisin, pine, and petrichor aromas. The liquor was thinner and slicker in the mouth, as softer, subtler notes of pine, malt, cream, steamed milk, roasted almond, toast, butter, and raisin flitted across the palate. I also noted some subtle mineral impressions, hints of petrichor, and touches of brown sugar and vanilla here and there on the finish.

As stated above, this was not a bad tea. Unfortunately, it was also really nothing out of the ordinary for a Georgian black tea. Just about everything one would normally expect to find in such a tea was here. If you’re a fan of Georgian black teas, then you will probably like this tea to a certain extent, as it would be the sort of tea you could always fall back on when you need your Georgian tea fix. If, on the other hand, you are just getting into Georgian black teas or are looking for a more unique Georgian tea experience, there are teas out there that are considerably more interesting and appealing. In the end, I would very likely pick something like Natela’s Gold Standard Black Tea over this one if given the opportunity.

Sweet, malty aroma. Very smooth and light-bodied black tea, with a faint citrus-floral note that might be best described as orange blossom. Petrichor note after longer steeping. The malt/baked-good quality is much more unassuming than I imagined from the aroma. Not strong as far as black teas go…I’d call it “pleasantly dainty”!

Today was one of those adventure type days, the Trio (which is what I should totally start calling Ben, Fish, and myself) went to a bin store. If you are not in the know, Goodwill (and some other thrift stores) have an outlet store, where you pay for things by the pound (or really cheap per item) and all the things that do not sell in the store get sent there in big bins. I did most my shopping when I lived in Pennsylvania at one (lovingly called the 50 cent store, even though now they are 85 cents, but the name stuck) and you can spend a few hours sorting thoroughly through all the bins. Not the one we went to today, it was massive, plus they kept rotating bins, so I could never see it all. I got some awesome new clothes (still need more skirts and some silk PJs…mmm silk) a cat scratching post, Ben got new clothes, and an antique printing press drawer. I have wanted one for years, going to turn it into a table to show off my rocks!

I love What-Cha (I know, everyone knows that by now!) their teas have become favorites of mine, but really what makes me so hype about What-Cha is Alistair’s love of exposing tea drinker’s to uncommon tea regions! Today’s tea, Georgia Old Lady Black Tea, comes from one of those lesser known regions, the country of Georgia, handmade by Natela of Nagobilevi Village, yes this tea is all made by a little old lady in her home, which is kinda beautiful. The aroma of the large curly leaves is very sweet and surprisingly brisk! Blending orange marmalade, cocoa, a creamy sweetness and a delightful finish of yams.

Giving the leaves their much anticipated (by them or me, you be the judge) steeping in my much loved steeping apparatus, the aroma gets all up in your grill with the briskness! The wet leaves have strong notes of malt and brisk citrus and oak wood. There is a sweetness to it as well, like orange marmalade and a bit of yams at the finish. The liquid is creamy sweet blending cocoa and yam notes with a bit of malt and a sour yet sweet note of orange marmalade at the finish.

Ah, my mismatched tea gear kinda works, the saucer from my broken vintage cup, and the vintage cup with no saucer, they are now best friends. The taste starts out brisk, but not too much, just the right amount to wake up the mouth and invigorate the mind. There are notes of sweet cocoa and orange marmalade, it then moves on to yams and a touch of malt. This tea is not the most spectacular black tea I have ever sipped, it is certainly good, I enjoyed every drop, but it is not the most complex of cups. So, your mileage may vary, if you want a super complicated tea then this is probably not for you, but if you want a delicious tea that has a homey taste, then this one is perfect.

For blog and photos: http://ramblingbutterflythoughts.blogspot.com/2015/06/what-cha-georgia-old-lady-black-tea-tea.html

The first thing I ordered from What-Cha was the Georgia sampler, and this was one of the teas. Really nice! There wasn’t a single tea I didn’t like in that sampler.

From Sil via the GCTTB3.

This dry tea smells very fresh and clean. I am getting very light hints of malty cocoa and maybe vanilla. Slightly sweet. The leaves are quite large and long, making it hard to scoop out of the bag with my tea spoon. So I instead just poured enough out that seemed to be a good amount to brew for one cup.

The brewed tea is very smooth. The liquor is thick. Definitely creamy but no cloying. There is a very light citrus flavour. The slight bitterness of the citrus is in contrast with the creamy flavour but they somehow work together. I am not getting any cocoa or vanilla flavours that I got in the smell. The black tea base is smooth with no bitterness or astringency. There is a slight roastiness to the tea.

This is a very good tea. Thanks Sil. I am curious as to why it is called Georgia Old Lady though…

Hi Lala, the tea is produced by an old lady from Georgia who makes all the tea by hand, hence the name ‘old lady’.

nice! glad you enjoyed it :) always happy to share teas!

This is pretty good. Lightly citrusy notes, hints of cocoa, sweetish with a little mineral in the background as it cools. Not sure I’d order it over some other What-Cha offerings but I have enjoyed this cup for sure. Thanks, Maddy Barone for the swap!

One more queued tasting note, and then it is the time for sleep because sleep is good.

Finished this one off with a little splosh of milk in it. Or at least I thought it was a little splosh; the milk flavour was very, very exaggerated though! So maybe I was more generous with the 2% than I meant to be. Early in the morning when I’m making my work tea, I’m not really quite “all there” yet. Many a time I’m just amazed I can leave the house without forgetting things at home, like my bus pass or debit card.

Other than the milk, this was really really quite sweet. We’re talking intense notes of creamed, sugary honey and some wicked powerful raisin notes. But, not raisins? Most of you know my thing with raisins; I don’t really like them. That’s putting it nicely; I don’t do raisins. This, was like a raisin but sweeter? Google is telling me that I’m thinking of Sultanas – and that makes sense I suppose. Sultanas are sweeter raisins and have a history of being paired with or likened to honey as well. That seems to describe this tea aptly.

The sweetness here was actually sort of cloying; and definitely jarring so early in the morning. It really felt like I had a serious sugar buzz going for the start of my shift! Not my favourite because of raisin similarities; but good overall. Good for fans of sweeter blacks.

And, today’s word of the day was (technically in Saskatchewan it’s the 11th for five more minutes so I’m including this): Gingham! Gingham is “a cotton clothing fabric in plain weave". Is that something a Georgian Old Lady would wear?

I looked for a good image for you. Just Google and hit images, that says it all. And it’s a southern thing but I think of it for younger people rather than old ladies.

I’m sure they do! (I’m thinking about the country Georgia, where the tea is grown :P)

I had enough for one last cup of this. Does that make this a sip down? I have fewer than 50 teas in my cupboard, so I don’t know. Anyway, a very nice tea. Mild, smooth, no bitterness to disrupt my enjoyment. A nice tea to sip on my mid-morning break.

I couldn’t resist picking this one up from what-cha during their sale, because of the name lol. What exactly does and old lady tea taste like? well in this case, there’s a fruitness here, which i guess you could call citrus, but i have a hard time distinguishing specific citrus tastes a lot of the time. this has echoes of your typical “red rose” tea but feels fancier and with more depth. Over all, a nice little cup for my first experience with What-Cha

I read the name and I agree with you, the name calls for a try lol.

The name caught my attention but the red rose reeled me in. Canadian to the core I guess…

haha lala, i’ll add some to the box for you – consider it repayment for all your surprises :)

ha ha. Ok thanks. I would appreciate that. But not too many surprises, ok?…