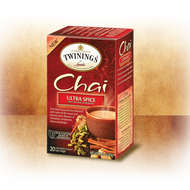 Fine black tea perfectly balanced with more of the sweet and savory spice flavors of cinnamon, cardamom, cloves and ginger.

The finest black tea expertly blended with the more of the sweet and savory spice flavors of cinnamon, cardamom, cloves and ginger to deliver a robust tea with a rich, vibrant aroma and bold, spice taste.

you know those almond windmill cookies? with almond milk and honey, that’s what this tastes like to me. not bad at all, but for something labelling itself “ultra spice”, i would expect a little more…spice. definitely recommend boiling water for this one, though, because at anything under, it just doesn’t brew to its full capacity.

Snowed in at the BF’s. He absolutely loves this tea with honey in it. I do like the ginger in the tea, but it’s not as spicy as bigelow’s chai tea. The spice is more biting rather than warming and smooth. Would probably be great with some creamer.

This is currently my favorite tea. I got my first box as a raffle prize at a friend’s Halloween party. When it’s sweetened properly, it has a really nice bite from the ginger. I also like to warm my milk in a small bowl placed on top of the cup while the tea steeps. I find it stays hotter longer that way, as I tend to add more milk to Chai teas than any other tea.

Added 1/26/2013: WOW! I’ve started splitting this half and half with milk and water for brewing. It takes a little more time, but I heat up the milk separatly and only fill the tea cup half way with boiling water to brew the tea. I let it steep for longer than usual (about 10 minutes or so) to get the spices nice and strong, then add the hot milk and sweetener. I don’t do it this way every time, but when I have the time to make it this way, it’s even BETTER! Still my absolute favorite tea!

P.S. I sent a couple bags of this to a friend in New Zealand. He and his mother LOVED it, but they can’t get it in their grocery stores, so now I’ll have to send them each a box! :)

Boiling 6 min, 0 sec
Yours I Like This
3 likes
0 comments
Edit

I really like chai tea, but this one is not my favorite. It is called Ultra Spice and I think when they tried to achieve the Ultra part the company just added more ginger. That is really the only extra spice I get from this tea. I tried it before doctoring with milk and sugar, but it definitely needed the doctoring to be drinkable. I will try this tea again and see if I have anything else to add to this review.

The third bagged tea I’ve tried in as many days and, like the others, a disappointment. It’s got a bit of spiciness to it, but no real bite. As Liv said in an earlier review1, it’s pretty flat. I don’t like cardamom and whatnot, so I wouldn’t be sad if the ginger were really strong in this, but it’s not. None of the flavours really jumped out at me individually, nor did they work very well together for a nice, smooth flavour.

I sweetened this cup but added no milk. Think I’ll try it with milk next time and see if that makes it better.

Chai Ultra Spice is only ultra gingery to my taste, and not ultra spicy, possibly because they didn’t put in any black pepper. They claim there is cardamom in there, but you could have fooled me, I didn’t taste it at all. Also, I looked at the ingredients list, and I’d really like to know what “natural chai flavour” is. Last I checked, “chai” means tea, and I seriously doubt it is natural tea flavor they’re talking about.

But, that said, if you’re looking for a bagged tea that tastes like liquid gingersnaps when appropriately doctored up with sweetener and milk, this is the tea for you. Even though it wasn’t the ultra spicy chai I was hoping for, it was pretty decent anyway.

I always keep this stocked since it is so cheap and easy to find. Nice spice, doesn’t taste ultra so the regular must be weak. Nicer with a little milk added in. Definitely keeps a spot in my heart and can compete with most looseleaf chais I’ve tried so far.

This is a freebie I got from Twinings’s website. Ocassionally, they let you sign up for free samples, but usually when I do, nothing happens. I was pleasantly surprised to find this in my mailbox a few weeks ago.

Anyway, it smells like a mostly ordinary chai in the bag. Clove stands out the most, followed by cinnamon and a tart scent that I think is just a combination of everything else. After it steeped, I splashed in a very small dollop of 1% milk and it went instantly pale. Not a good sign, usually. I hate a chai that can’t hold its own against a little milk.

As I sip, I’m disappointed. It tastes like gingerbread made from cardboard. There is a hefty amount of ginger, which is nice and leaves a pleasant burn. That must be the “Ultra” part. But the rest of the tea… I can’t taste the black tea base at all. The cinnamon, ginger, and clove are a lovely touch, but… I dunno, this just tastes cheap and kind of lame to me.

Probably one of the spiciest of the Twinings bagged teas but still very mild for a chai. I would recommend it for those new to chais or who don’t like the heavily spiced ones.