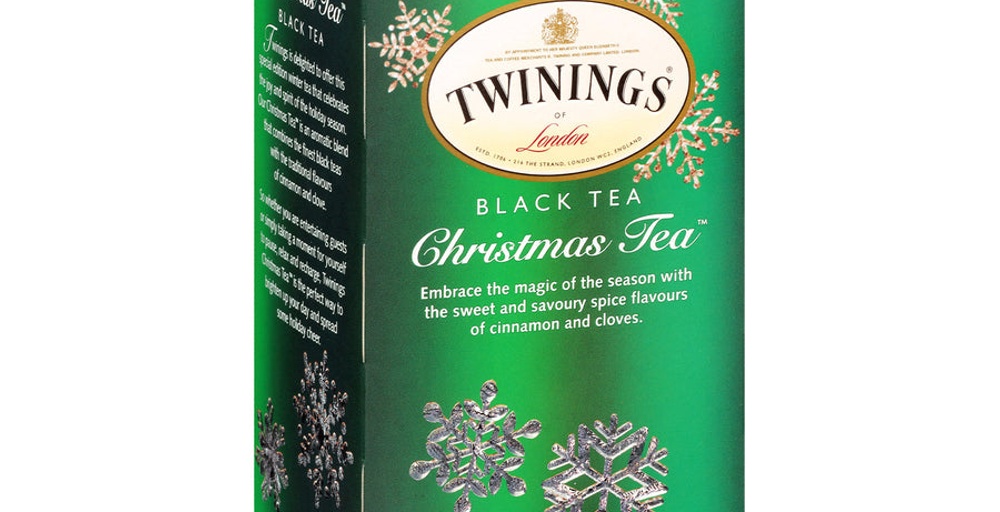 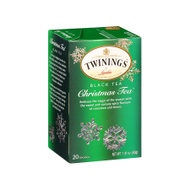 Embrace the magic of the season with the sweet and savoury spice flavours of cinnamon and cloves.

Our Christmas Tea™ is an aromatic blend that combines the finest black teas with the traditional flavours of cinnamon and clove.

Create a merry moment with Twinings Christmas Tea™. Expertly blended with the savoury flavours of cinnamon and clove, this fine black tea is sure to bring you holiday cheer with its warm, spicy taste and soothing aroma.

Today’s the Christmas party at work (yes, technically, to be PC it should be “holiday” or “winter”, but sometimes we’re not very PC). So, to start getting in the celebratory mood, I’m sipping on this (I’ve got a bag of RoT’s Comfort and Joy steeping to have next).

I can already smell the food cooking in the kitchen, and my coworker left her homemade pecan pie on her desk and then left the building. I love pecan pie. It looks really good sitting over there all lonely…

Tea! Back to the tea: this blend is softly spiced, and not very strong if you think in terms of chai blends. I wish there was more citrus and cinnamon here. but it’s not too bad. Probably wouldn’t invest in it again; Christmas Nutcracker by Praise Tea is a much better Christmas blend to me!

I always thought this one tasted like a Christmas tree, somehow. :)

This morning I was straightening my tea cabinet, and came upon these two bags that Jaime sent to me – thankfully!!! – because if I hadn’t found them by the day before New Year’s Eve I would have had to wait until next Christmas to drink them! (I’m serious!) I put them right in front of my tea kettle so I would remember to have them for afternoon tea – and here we are!

I think it’s really tasty! I’m having it with milk and sugar, and I’m experiencing a definite spiced tea creamcicle thing :) The orange must be blending with the milk – and it’s nice!! I’m completely enjoying it. No bitterness, and the spices and flavorings are natural tasting and not cloying.. Another bagged tea which I think is fantastic! I would totally buy this next holiday.

I’m drinking it again today. shrug What can I say, it goes perfectly with this orange cranberry oatmeal cookie!

Had a cup of this and the teabag itself smelled of cinnamon and clove. Hhhmmmm, I put on the kettle. As I was waiting for my water I read the box. Cinnamon….check. Clove…check. Artificial flavoring…….I wasn’t expecting much. Still, I gave it a go.

In the cup, I could smell the spices, but I honesly couldn’t taste much of anything. Not even the black tea. Very bland, I will not be having this for Christmas, or any other time. My tea tastings for March can only improve!

Boiling 4 min, 0 sec
Yours I Like This
6 likes
5 comments
Edit

The only “Christmas” tea I’ve found to love is one by Stash, otherwise, they all seem to disappoint! :(

I haven’t tried too many Christmas teas, but I love Stash’s Christmas Morning, White Christmas, & Holiday Chai! Which are you referring to Indigo?

ummm oh jeeze, it’s in a red packet. I reviewed it awhile back. I believe it was Christmas Morning! White Christmas was just ok for me

I liked the Holiday Chai, sent some to my daughter’s boyfriend in N. Ireland and he loved it. The White Christmas was okay, but I don’t drink much peppermint tea. It is very soothing, though.

I have this to test, and should get to it before summer, huh? Also have Stash’s Christmas Morning and Eve (did not like Holiday Chai, but not a gingerbread/rum fan).

Cloves, a little bit of cinnamon and a smidge of orange rind flavor. Very evocative of Constant Comment, but with a bit more clove.

This tea has cinnamon and cloves and falls into the “medium”, leaning towards light spiced “chai” category. Twinings does not reveal other details, but I’m definately getting an orange flavor in this mix. Since cinnamon and cloves are my 2 favorite chai spices, I’m finding this tea good … very good if you want a light take on chai.

The orange is making me wonder how this would taste with a smidgen of cream … hold on … mmmm, creamier (good). Btw, this orange is more of a fresh orange taste (not bergamot). And it stays bright underneath the cream (for the record, I use Coffeemate “Natural Bliss” Sweet Cream).

Couldn’t resist picking up a box of this at the grocery store today. Nicely spiced… not too strong. Can taste cloves with a little bit of cinnamon. Enjoying this cup while the kids are napping.

I FORGOT I DRANK THIS TEA.
Once upon a time I was bored so I decided to go to Epcot. It was a slightly chilly day and I was at The Tea Caddy and the lady at the till was talking to a guest saying how the Christmas Tea was really good! I was intrigued, but I wasn’t about to spend money on bagged tea because.. I just don’t like bagged tea that much? Yeah it was buy 3 boxes for $20 but… I just won’t drink it.
I ended up just finishing up the world showcase and right at the Port of Entry, Canada side, there was a stand where you can get drinks and things for their Holidays Around the World! I ended up just buying Christmas Tea. Of course it was overpriced, but hey, that’s Disney for you.
Drank me some Christmas Tea as I finished up my Christmas shopping and I sat on the bench right by the Christmas tree :) It was actually pretty good for a bagged tea! I drank this like Dec. 15th so I forgot the aroma and how it actually tasted, but it was a decent cup of tea :)

((I just read a couple reviews of this tea and a lot of people said it had a weak flavour and was slightly bland. Well I actually like my black teas weak and my whites and greens strong soo… this tea was decent for me. Not complete disappointment, but also not praise-worthy. It is tea and it did its job))

Here I sit at the computer, playing the Blue Velvet Jazz score, tasting my first sip of my best friend’s Christmas gift to me, Twining’s bagged Christmas Tea. I’m using my new little Gingerbread Christmas For-One Tea pot set I nabbed at Goodwill this month. It’s adorable and looked especially so with the little Twining’s tag hanging out of it while steeping.

Pleasantly surprised? Yep. The smell was barely existent but the taste is strong and filled with delightful Cinnamon. Christmas tea is really just a Chai Tea, but I love Chai so this is perfect. It’s ironic but recently, after trying some Chais, almost all dissappoint. I first found Chai years ago in teabag form and swooned. I have since tried Thai Chai by Adagio – yummy different sort of tropical Chai. I nabbed some Oriental Spice to hopefully serve as a Chai and Orange Spice but sadly disliked it. I also nabbed another Masali Loose Tea Chai from the local tea shop and sadly it was lackluster as well. Must I only find blissful Chai solitude within a teabag? Surely not!

This one is very rich on Cinnamon, which I enjoy, followed by a pleasant orange taste resting on the tongue. Skimming through reviews, it looks as if others sometimes note a lack of cinnamon. Odd. Perhaps the cinnamon is brought fuller out with sugar, I think. It is not heavy on other spices like traditional Chais, so it not a perfect replacement for other Chais, just a nice Christmas hot Cinnamon sweet taste, delicious.

A yummy tea that I will guarantee shall dissappear quickly from the cupboard. The box is a pleasing red design as well. It is not the stand-up shown here but mine is horizontical.

I have had a couple of cups of this tea over the past week, but forgot to log it. Needs sweetener to bring out the cloves and cinnamon flavor, os it is not overly spicy. Tastes like the spices in mulled cider, though without the apple flavor. A pleasant tea for a winter’s day.