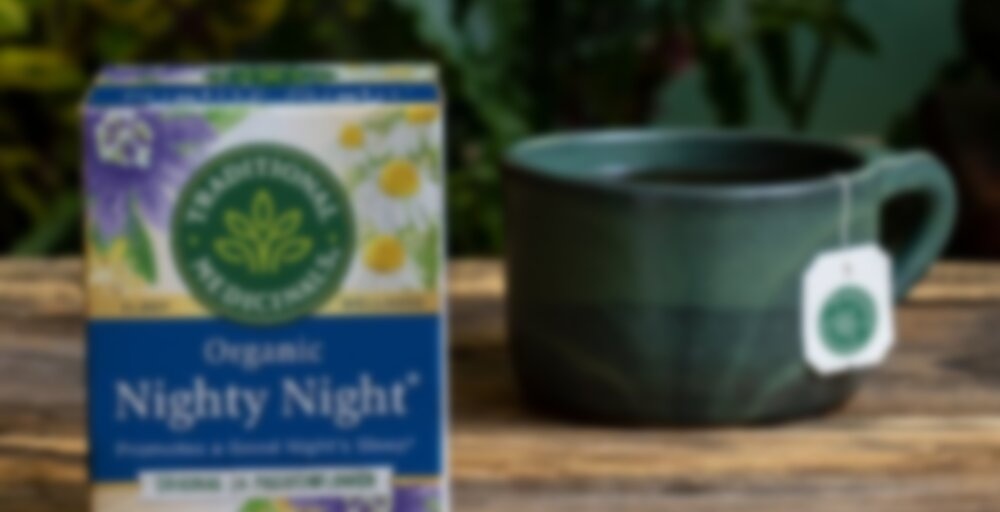 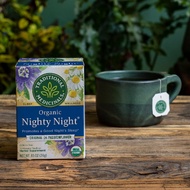 by Traditional Medicinals
70
You

Herbal Power
This “sleep tea” helps you relax and get a good night’s sleep.*

Taste
Minty and sweet, with notes of citrus and spice.

Plant Story
Generations of native South Americans have used passionflower to soothe the nervous system and help relieve occasional sleeplessness.* Our herbalists appreciate both its wild beauty and its herbal power, blending it with calming herbs like chamomile and linden flower to create a tea that helps you sleep well.*

Organic Nighty Night® addresses tenseness, irritability, nervous restlessness, and nervous stomach thus promoting nighttime relaxation.* The use of passionflower, hops and chamomile for restlessness and mild sleeping difficulties is supported by clinical data and by traditional use.

*These statements have not been evaluated by the Food and Drug Administration. This product is not intended to diagnose, treat, cure, or prevent any disease. (Above update by rmd)

This bag has put me over the top. Obviously it’s late (1am), but I also have now consumed a hefty quantity of passion flower, chamomile, catnip, hops, et cetera!

The flavor is better than I recall it having been—of course, my powers of mental acuity are now severely impaired. I did notice that valerian is not listed among the ingredients on my new box of Relaxation Teas (of which Nighty Night is one). So the herbalists chez Traditional Medicinals appear to have changed the formula but not the name of this blend.

Well, whatever works—and this does!

that’s an interesting name for the tea :) care to swap a some tea for a few bags of this sometime? i got lots of teas check my cupboard out

all the un-sampled teas i have are herbal, so my tastings have been kinda slow going.
but due to a slight chill in the air and my perpetual slight dehydration due to marathon training, i actually drank 3 herbals last night :)

this one, i never finished the cup. and i could say that it was because i was too tired? but i think it was probably just because i didn’t really like it. it was just a sample and i don’t have any more, so not to worry.

my new new kindle? it’s on my doorstep right now! i can’t wait to go home and cuddle it. can’t! wait!

This tea, I believe, can not be rated accurately due to the fact that I use it for a sleep -aide. If I was rating it for taste, it would probably be around a 50%. However, the overall experience is much better. The aroma promotes relaxation and almost reminds me of eucalyptus or mint.

I have not yet been able to master a great sleepy time tea with loose leaf; therefore, this is the best bet.

I don’t steep it as long as it suggests (10-15 minutes), because I like to drink at least two cups. Also, I enjoy adding eleutherococcus herbal supplement to assist in the ‘sedation’ effects. :)

This really mostly tastes of mint and chamomile. I wish the mint was stronger though, it tastes less-than-fresh to me? Maybe I’m just a mint snob!
Not really noticing it making me any more sleepy. In the future I think I’d pass this one up for just plain mint (it’d be cheaper).

perfect balance between the mint and chamomile earthy flavor

Not a big fan of the taste. I’m not really fond of chamomile. However, as a relaxing tea, it works OK.

SIPDOWN of tea sent by derk, thank you!

It’s 9 pm, I am very tired after 7 hour long inventory check I did today. Went through 250 lady panties, same amount of bras, some socks and tights, lots of pillows and covers, some candles and some candleholders. Amost all the time wearing facemask and gloves. Gloves which we use when counting freezers!

So I am terribly tired (woke up in 5 am), pretty much everything hurts, some minor panic attacks as my nieces visit comes closer.

But to the tea, that is what matters here most I guess.
It’s nice. Refreshing, but as well calming down, it makes me bit sleepy which is good thing, there are some nice notes of passionflower reminding rather passionfruit in taste. Naturally it is quite herbal there as well. I think it is great tea for times like this one.

Thank you derk, once more :). And moreover I just love the wrapper too.

At least for me, I like to hear about people’s days as well as the tea. Sorry yours wasn’t so good. ):

Oh, I hope your mask is a good, comfortable one!

Nattie, it was only a tiring day :) There were certainly worse daays. I think I lost bit of “grip” in inventory checks; I wasn’t doing any for two months and this one was quite harder than usual, as we were in warehouses and not in a shop itself. That will come tomorrow night.

Ashmanra: it is comfortable, but wearing it for 6 hours straight isn’t comfy at all :)

My coworker gave this to me, because he hopes to cure my insomnia with tea? lol
I’m a bit surprised that this doesn’t contain valerian, I feel like last time I tried a sleepy tea from this company (way back in college), it did contain valerian, so I was super careful with it.
The wrapper is a plastic lined paper envelope, ugh.
The dry leaf is more minty smelling, and less chamomile than the sleepy time tea by celestial seasonings. See Kevin, I do drink sleepy teas…
The steep time is 10-15 min, and then SQUEEZE the teabag. :/
Maybe I’ll update this tomorrow with how I slept, maybe I won’t.
I shall keep this away from my cat, because of the catnip. What is passionflower herb?

NCCIH says that passionflower was historically used as a mild sedative, and may cause doziness. There was some small studies to see if its sedative properties could help with anxiety, but it was ruled that the studies were too small to conclude anything.
Hop strobile is maybe the stamen of the hops flower? The same hops as is used to brew beer (I actually hate the flavor of hops, it’s too bitter for me, I prefer malty beer). Hops may be a mild sedative, help with anxiety and used by people with sleep disorders. Maybe I should learn to like IPA.
Linden flower tea is sometimes used for calming effects in infants. I’m just googling these ingredients randomly at this point. I can tell you that I am not an infant and I probably need a stronger dose than an infant.

It’s interesting how they list how many mg of each herb is in the teabag. The leaf is coarsely ground. It’s hard for me to want teabags after years of loose leaf. By the way, if you haven’t tried Adagio’s Cha Cha yet, it’s like a mintier sleepytime (CS), but it’s loose leaf and you can see all the pretty flowers and such.

Maybe I should have saved this sample for a night where I’m still staring at the ceiling at 3am, not when I’m just waiting around at 11pm, but 11pm is such a more reasonable bedtime.

It doesn’t really taste like much, despite the long brew time. I just left the bag in there, it can keep steeping, I don’t think it’ll oversteep. I can smell the orange oil a little bit, and it’s got a very mild back of the throat mint feeling. Like you walk past a garden and you catch a hint of mint on the breeze, that’s how mild this is.
Oops, this says to have 2-3 cups late in the day, including at least one 30 mins before bed.
But can you even resteep? Or do they mean for us to use 2-3 teabags per evening? I’m not down for that. Too much waste, but also I only have the one sample.

Eh and now it’s past midnight and bleh. Doesn’t feel that different?

A variety of this tea that does contain valerian exists somewhere out there.

Organic Nighty Night is a smooth bedtime blend. It has a forward but gentle and cooling mint and catnip taste. Underneath that, it is slightly earthy-leaf, floral-chamomile and herbal-citrus. Breathing in the minty steam, I also get something faintly sweet and almost like vanilla – I’m guessing the linden flowers. How pleasant.

This was very easy to drink even with leaving the bag in the mug as I sipped.

I’m not far enough into my cup to assess whether this tea will have the desired effect, but I like the taste. I find it to be very smooth and mild—it goes down easy. I just left my teabag in my cup since it calls for a 10-15 minute steep. I’m about at that point and it still tastes nice to me. And maybe it is actually making me sleepy already, because I find that I’m out of thoughts on this one! I might try again tomorrow night earlier in the evening to see if it has a similar effect or if I’m just getting tired because it’s late. :)